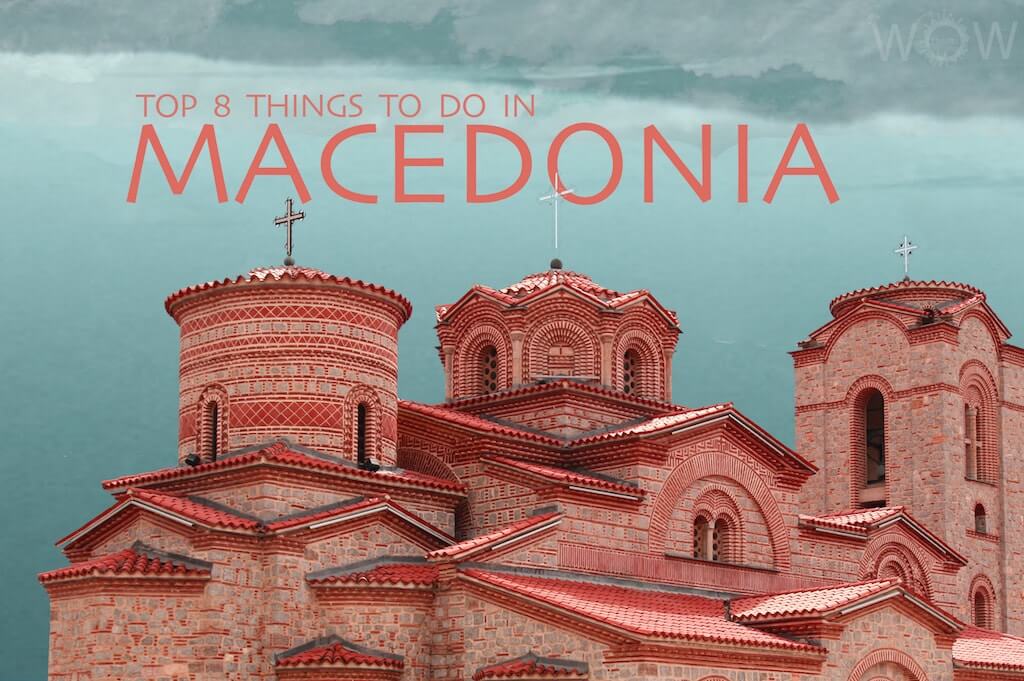 The former home of the Byzantines, Macedonia, is a small Balkan nation that boasts a rich and diverse historical past that includes influences from the Roman Empire, Bulgarian Empire and the Ottoman Turks, which translates today in a unique architecture, diverse culture and delicious cuisine. Come here to experience not only Mother Nature’s wonders such as the deepest lake in the Balkans, but also to see ancient sites and modern man-made structures. Visit the capital Skopje, a fast-developing melting pot where East literally sits facing West across the Stone Bridge and explore Ohrid, a magnificent, exciting, mysterious and surprising city. North Macedonia will surprise you.

One of the most magnificent churches in all of North Macedonia stands right above a small fishing settlement, on a cliff rising up from Lake Ohrid; St. Jovan Kaneo is a combination of Byzantine and Armenian architectural styles.

On the left side of the river Vardar, in the ancient part of Skopje is the old Skopje bazaar, the largest bazaar in the Balkans outside of Istanbul. The old bazaar has been a center for trade and merchants as early as the 12th century and nowadays it represents an iconic heritage site for the city. In the small innumerable handicraft shops, the Skopje’s handicraftsmen can still be seen, tailors, cobbler, quilt makers, shoemakers and tinsmiths. The old bazaar is also within a walking distance from the City Centre and Kale Fortress. Planning to visit? Stay at one of the 11 Best Hotels In Skopje.

The Millenium Cross on the mountain above the city has been growing into one more symbol of Skopje. 76 meters (249 ft) tall, standing at the summit of Vodno Mountain. The Cross was erected in 2002 in honor of the new millennium and 2000 years of Christianity in Macedonia. The Millennium Cross shines at night and is seen from almost all parts of the city.

South of Bitola, on the slopes below the village Bukovo, the ruins of the ancient city Heraclea exist, which was main city center of Lynchestis area. Heraclea is mentioned by most of the ancient writers: Polybius, Strabo, Caesar and others., in all itinerariums (Itinerarium Antonini and others.) in Tabula Peutingeriana as station on the road Heraclea – Stobi. Heraclea is mentioned in historical sources as a city that was established by Philip II of Macedon, around the middle of the IV century BC. In its intention to extend the Macedonian state, Philip II in the border areas erected fortified cities, which served as the cornerstone of war and cultural expansion. Source: whereismacedonia

One of the oldest and the richest monasteries in North Macedonia is St. Naum’s monastery, and is located 29 km away from Ohrid. The Monastery is named after the medieval Saint Naum who founded it and it is situated along Lake Ohrid. Since the 16th century a Greek school had functioned in the monastery. The area where the monastery of St Naum (Albanian: Shën Naum) lies belonged to Albania for a short period from 1912 until June 28, 1925, when Zog of Albania ceded it to Yugoslavia as a result of negotiations between Albania and Yugoslavia and as a gesture of goodwill. The Lake Ohrid area, including St Naum, is one of the most popular tourist destinations in Macedonia. Source: visitohrid.org

This historical site in Ohrid is where the Macedonian Orthodox Christian Faith was first founded in the 9th century AD by Saint Clement the first Bishop of Macedonia who died in 916 AD and is actually buried inside the tomb he himself built here. In the country’s turbulent past, the original church has been destroyed, replaced with an Islamic Mosque, which in turn was destroyed, rebuilt, then allowed to fall into disrepair during the country’s 20th century communist rule, and finally – some ten years after Macedonia gained its independence -rebuilt with the aid of state funding. Source: europetravelz

The mountain Pelister is a part of the mountain Baba, in southwest Macedonia. It is proclaimed as a National park in 1948, because of the rare national wealth’s in it: Molika forests- relict from tercier flora, granite stones and their morphologic relief, especially glacial relief in the alpic part of the mountain. The beauty of the area is completed with wild animals: bears, wolfs, capricorns, stags, wild pigs, rabbits, a few kinds of eagles, deer’s, partridges, red beak jackdaws and endemic Macedonian pelagony trout. Source: hotelmolika

Macedonia boasts many villages and small towns worthy of visiting. For instance, the town of Krusevo is a great place to soak in traditional Macedonian way of life, and purchase genuine Macedonian hand made goods.