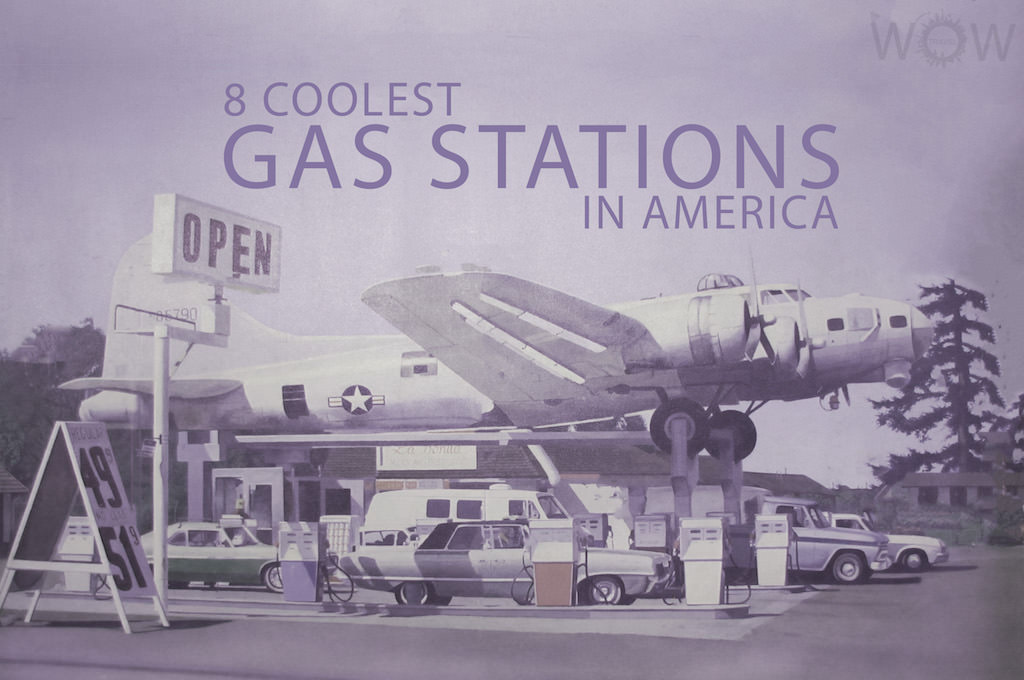 Many of the gas stations boast stunning architecture, some have historical significance, and others are simply works of art. Enjoy our list of the 8 Coolest Gas Stations In America.

This modern, metal structure in Los Angeles is the brain-child of a Boston design firm. Although fostering a dependence on fossil fuels, this large, geometric structure boasts an eco-friendly profile – making use of recycled materials and solar arrays.

The Airplane Service Station, also known as the Powell Airplane, is a service station built in 1930 in the shape of an airplane. Located at 6829 Clinton Highway in Powell, an unincorporated community in Knox County, Tennessee, it is on the National Register of Historic Places. The station was built by brothers Elmer and Henry Nickle. Their intent was to increase business by having a service station that was visually unique, both to area residents and to travelers on newly widened U.S. Highway 25. Source: Wikipedia

Located along Route 66 in Shamrock Texas, the Tower Conoco station was built in 1936. This historic land mark is an excellent example of the art deco style with its curvilinear design and neon highlights.

Winston-Salem in North Carolina is home to the last Shell Oil clamshell station in the United States. Located on the quiet corner of Sprague and Peachtree Streets. It was built by R.H. Burton and his son, Ralph, in 1930. The owners of the oil company decided to attract customers through a series of shell-shaped service stations. They built, at least, eight in the Winston-Salem area, but this one is the only one remaining.

The Hollow Mountain Station in Hanksville, Utah, was built in 1984. No, it wasn’t already a cave, and yes it is literally carved out of the mountain. inside there is a restroom and a convenience store inside. Make sure to use the restroom to actually see the mountain.

This World War II B17 Bomber is located on top of a gas station in old Highway 99E in Milwaukie, Oregon (near Portland). It was originally placed at that location for display and for use as a shade for the gas station which is now out of business.

The Teapot station was built in 1922 and was operating for about 80 years. Eventually, in 2007, the city bought the gas station in order to protect its historical value and plans to move it to the town center and re-open it as a tourism visitor center. It was named after a scandal in which the cabinet under President Harding was said to be involved. The government owned an oil field (name: Tea Pot Dome) in Wyoming and leased it under obscure circumstances to private oil companies. Source: magazineusa

This abandoned station, At the corner of East Colvin Street and Nottingham Road in Syracuse, New York, was the home of the World Reclamation Art Project, and it was once covered in knitted, stitched and crocheted fabric squares that were submitted by participants worldwide to protest the world’s dependency on oil. People from across the globe sent Jennifer Marsh their handmade squares, and the International Fiber Collaborative sewed the panels together to completely cover the gas station. Although the art installation was temporary, the abandoned station remains and people still stop for photo opportunities.