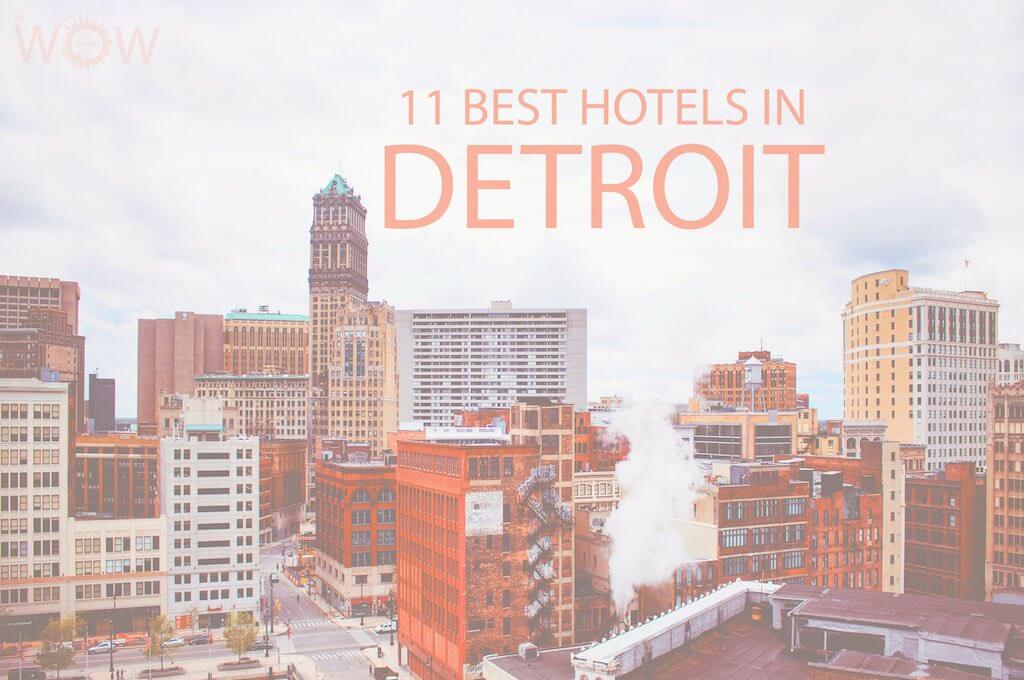 Dating from 1701, Detroit in the state of Michigan is among the oldest cities in the Midwest. In the 19th century, it was being likened to Paris owing to its eye-catching architecture and lush parks. By the 20th century, Detroit had become the hub of the automobile industry. Today, Motor City, Motown, D City, or however you want to call it, is a whirlwind of activity. When it comes to the arts, dining, shopping, and entertainment, the city excels. Choose from among the best hotels in Detroit MI and be prepared for a fabulous time!

Did you know that a number of celebrities hail from Detroit? Some of them are rapper Eminem, actress Kristen Bell, and soul music legend Aretha Franklin. Detroit is also where you’ll find one of the Largest Zoos in the World. What’s more, it’s home to one of the World’s Most Amazing Cinemas. So, whether you’re visiting for a weekend getaway or a longer vacation, you’ll find plenty of things to see and do in Detroit.

What was once a 1920s fire station is today the esteemed Detroit Foundation Hotel. Traces of its historic past are evident in details such as the red-brick facade and original fire poles. However, it’s filled with modern and high-tech features and amenities for an exceptionally comfortable stay. Each of its 100 spacious rooms comes with climate control and a flat-screen TV. Some also have a separate seating area. The hotel is pet-friendly, though expect additional charges for your furry friends.

Wi-Fi is free throughout the property and the front desk is open 24/7 to assist you. For breakfast, lunch, or dinner, head to the Apparatus Room, the hotel restaurant acclaimed for its delicious offerings. Also, there’s a well-equipped fitness room so you can meet your daily fitness goals. Close by, attractions such as the Detroit Opera House and the Joe Louis Arena are hits with locals and tourists alike.

Also dating from the 1920s, The Siren Hotel is undoubtedly among the best hotels in Detroit MI for many reasons. First, the former Wurlitzer store’s transformation from an abandoned building to an attention-grabbing boutique hotel is impressive. Second, it offers 106 amazing rooms filled with antique furniture from different countries. Third, it’s home to fabulous dining and drinking settings including a 14th-floor rooftop bar with panoramic views of the Detroit cityscape.

This 4-star Baroque gem is in the downtown area and offers easy access to several attractions. For instance, the Gem Theater and the Music Hall Center are within walking distance. The Siren is also just a short drive from the Detroit Metro Airport. However, it doesn’t offer an airport shuttle service. Don’t let that worry you, though. The helpful hotel personnel will be happy to help arrange transportation for you, to or from the airport or elsewhere in the city.

Yet another of Detroit’s historic buildings, the Westin Book Cadillac has a distinguished past. In 1924, when it first opened its doors, it was Detroit’s tallest building. Not only that, but it was also the world’s tallest hotel. This 4-star property underwent a major restoration in 2008. Today, it’s home to 456 rooms spread over 23 floors. On the top 8 floors, you’ll find opulent condos. In your room, you can enjoy luxuries such as a 55-inch LCD TV, a video game console, and a pillow menu. However, wired and wireless Internet in the rooms come at a price.

The hotel offers an indoor pool, a spa, and a hot tub. Dining options are plentiful at 5 restaurants, including the renowned Roast steakhouse. The hotel is in downtown Detroit, a stone’s throw from attractions such as the Cobo Center, Ford Field, and Fox Theatre.

With a host of dazzling entertainment options, Greektown Casino-Hotel is a worthy destination on its own. The casino is home to thousands of slots and video poker machines as well as ever-popular table games like craps and baccarat. When it comes to fine dining, the property also excels with its 5 restaurants and 2 bars. And, with 20,000 square feet of meeting space, it’s also a popular conference and exhibition venue.

This luxury hotel rises 30 stories above historic Greektown. Its 400 well-appointed rooms and suites offer panoramic river and skyline views. Parking, Wi-Fi, and access to the fitness center are included in the resort fee. Popular landmarks close to the hotel include the GM Renaissance Center and Campus Martius Park.

Historic luxury with every modern comfort is the name of the game at The Detroit Club Hotel. It’s housed in a late 19th-century Romanesque Revival building that used to be a gentleman’s private business club. This 4-star hotel boasts charmingly decorated rooms, a 24-hour gym, a world-class restaurant plus 3 bars, and a full-service spa. No wonder, then, that it’s deemed one of the best hotels in Detroit MI.

Wi-Fi is free throughout the property, though valet parking involves a daily charge. In any case, bringing a vehicle might not be necessary since there are many Detroit attractions you can walk to. These include the Detroit Opera House, the MGM Grand Detroit Casino, and the Joe Louis Arena.

Aloft Detroit at The David Whitney

History buffs might find Aloft Detroit at The David Whitney among the best hotels in Detroit MI. The David Whitney, a historic landmark, goes back to around 1915. It’s one of American architect Daniel Burnham’s notable creations (another is the famous Flatiron building in New York City). Everything about the property leaves a lasting impression: from the spectacular lobby to the 4-story gold-leafed atrium.

Each of the hotel’s 136 rooms boasts pillowtop mattresses, a flat-screen TV with premium channels, and free Wi-Fi. The amenities, likewise, cater to every guest’s comfort. Breakfast is free while the restaurant and bar offer food and drink late into the night. Meanwhile, there’s a fitness center and a business center that you can use any hour of the day or night. The hotel also welcomes pets, albeit for a fee. Many of downtown Detroit’s popular sights are within walking distance. The Fox Theatre, for example, is a mere 4-minute stroll from the hotel.

The Inn on Ferry Street

Its location, friendliness, and sheer beauty make The Inn on Ferry Street one of the best hotels in Detroit MI. Situated in the historic district, this charming inn is an exquisitely restored Victorian building. There are 40 rooms arranged over 3 floors. The hotel doesn’t have an elevator, so those with mobility issues might choose a room on the first floor. Guests can also make use of the fitness center for an additional charge.

Each room is individually furnished and decorated. The in-room features include A/C, premium bedding, a private bathroom with designer toiletries, and cable TV. A buffet breakfast with diverse choices is complimentary. Likewise, parking, Wi-Fi, and an area shuttle service are free. If you’d like to explore the area on foot, you’ll find the Detroit Historical Museum and the Detroit Public Library within easy walking distance.

Located in the historic Greektown district, the Atheneum Suite Hotel might not be the cheapest lodging choice. But, it impresses with its design and amenities. Teeming with traditional and modern Hellenic influences, it’s a visual delight. Not only that, but the hotel is also bursting with a host of modern comforts too. Every one of the 174 elegant suites features marble bathrooms with deep soaking tubs or whirlpools and breathtaking skyline views.

The former Ferry Seed manufacturing building now offers a wealth of fabulous amenities. Guests can take advantage of the fitness center and suite service, both of which are available 24/7. The lobby, featuring larger-than-life murals by local artist Hubert Massey, is a great place to chill after a day of sightseeing. Nearby attractions include the Greektown Casino, Music Hall Center, and a dizzying array of Greek-themed restaurants.

Element Detroit at the Metropolitan

A Marriott property, Element Detroit at the Metropolitan is a downtown apartment hotel that’s ideal for either business or leisure. If you book any of its 110 apartment units, you can enjoy features such as full-size kitchens, plush bedding, free Wi-Fi, and spa-inspired bathrobes. Don’t feel like cooking first thing in the morning? Not to worry; you can start your day with a complimentary breakfast buffet. And, if you need to burn off some of those breakfast calories, you can spend an hour or two at the fitness center. Later in the evening, head to the rooftop bar and unwind with a cocktail.

The property is pet-friendly, although an extra charge is levied. Nearby, downtown attractions like Ford Field, Fox Theatre, and the GM Renaissance Center are popular sightseeing destinations.

Book a room here and dally with lady luck at the casino and pamper yourself at the full-service spa. There’s an indoor pool that’s perfect for refreshing dips. However, minors or those under 18 years old are not permitted in the pool, the spa, and fitness facility. When it comes to dining, you can take your pick from 4 restaurants, which specialize in American cuisine. The MGM Grand is in Downtown Detroit, close to the Fox Theatre and Little Caesars Arena.

The downtown area has some of the best hotels in Detroit MI, and the Shinola Hotel is one shining example. Part of the Shinola luxury goods brand, this boutique hotel features 129 beautiful rooms where guests can enjoy a turndown service, a private bathroom with a deep soaking tub, in-room massages, and digital TV. The hotel complex consists of 5 buildings: 2 are a former sporting goods/hardware store and a sewing-machine store, while 3 are new structures modeled after historic architecture.

The Shinola is home to 4 restaurants, 2 bars/lounges, and 24-hour room service. Its fitness facilities are likewise open 24/7. Guests are welcome to bring a maximum of 2 cats or dogs per room at no extra charge, as long as each doesn’t exceed 40 lbs. Public parking is available, albeit for a fee. However, the hotel is near public transportation so it isn’t necessary for you to bring a vehicle. Also, destinations such as the Detroit Opera House and Comerica Park are just a short stroll from the hotel.