12 Of The Most Amazing Cinemas Around The World 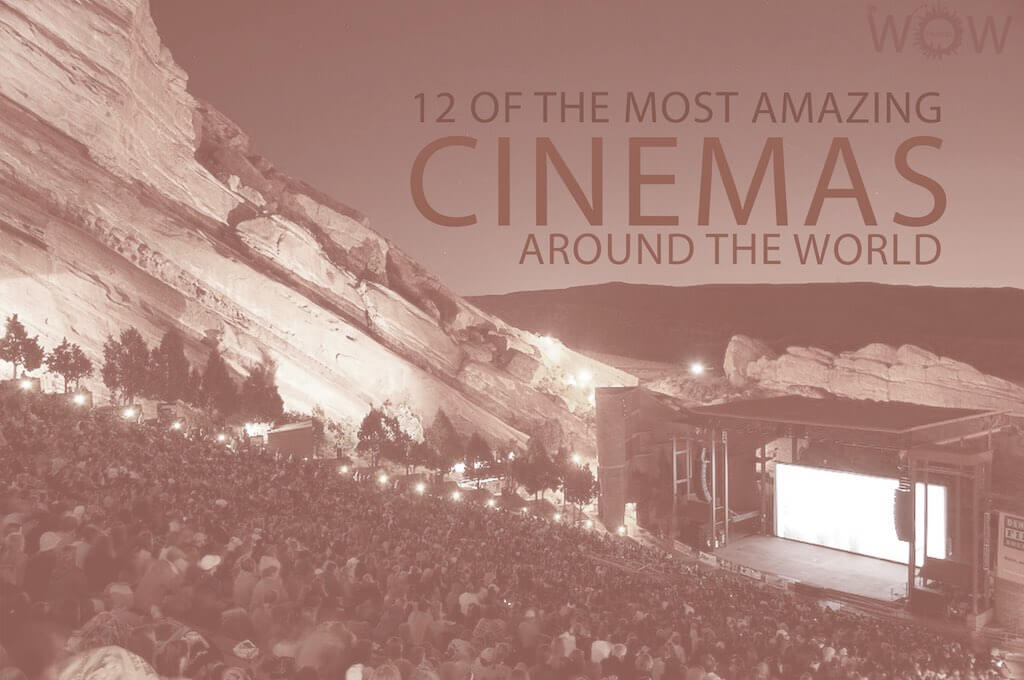 Watching a film was once considered a novelty as very few places for screening films existed. The very first successful theater to permanently screen films was the Nickelodeon in Pittsburgh in 1905. From the screening of the first feature-length multi-reel film in 1906, films and cinemas have evolved tremendously. From the initial black and white silent movies of the yesteryear, to the 3D and 4D cinema of today, the cinema experience is still as popular as it once was. Even though many people choose to watch movies on their screens at home, nothing beats the experience of watching a film in a theater. Theaters today have undergone huge transformations but they still don’t hold a candle to some of these amazing theaters which are listed below. Many of the amazing theaters on our list have been in existence for more than a century.

The beautiful Roman amphitheater located in Pula, Croatia is the only remaining Roman amphitheater to have four side towers with all three Roman architectural orders entirely preserved. The annual Pula film festival has been held here since 1954 in the months of July or August. The Golden Arena awards which are the national film industry awards form the highlight of the film festival. Besides screening films the arena is also used for concerts.

The Red Rocks Amphitheater is a rock structure about 10 miles west of Denver, Colorado is known for its natural acoustics. The amphitheater was opened to the public in June 1941 and has been a famous venue for public and private performances since then. Films have are regularly screened at the venue by Film on the Rocks which is a collaborative production of the Denver Film Society and Denver Arts & Venues. Francis Ford Coppola’s ‘The Godfather’ was the first film to be screened at the venue.

The Electric Cinema has been in use for more than a century with a brief closure between the years 1993 to 2001. Opened on 24 February 1910, in London’s Portobello Road, the Electric Cinema was one of the first buildings in Britain that was specifically designed for motion pictures. The theater had periods of success and failure but eventually closed down in 1993. Architects Gebler Tooth undertook the restoration of the theater in the 1990s and the Electric Cinema was reopened in 2001. It is now a Grade II Listed building.

This beautifully located open-air cinema near the river bed in the city of Prizren in Kosovo is a great place to catch a movie under the stars. The open-air cinema comes to life during the International Dokufest, Kosovo’s International film festival which focuses on documentaries and short films.

The theater was opened by the Fox Theaters chain in 1928 as a flagship movie palace. This theater in Detroit is not only the largest of the original Fox Theaters but is also the largest surviving movie palace of the 1920s. Its unique architecture has placed it on the list of National Historic Landmarks. The theater has three levels of seating, the Main Floor above the orchestra pit, the Mezzanine and the Gallery (balcony). It has a seating capacity of 5,048 seats.

Le Grand Rex is the largest cinema theater in Europe, renowned for its beautiful decoration and grand auditorium. Opened in December 1932, the theater was built for Jacques Haik, a wealthy film producer who wanted to create the most beautiful movie theater in Paris. The main auditorium of the Grand Rex has a starred ceiling and fairytale decorations on both sides of the screen.

Sotto le Stelle del Cinema literally translates as ‘under the stars of the cinema,’ which means that you can enjoy watching a movie in the open air, under the stars. Films are usually screened in the summer evenings from mid-June to mid-August on one of Europe’s largest screens in Piazza Maggiore in Bologna. Classic silent films, as well as the latest films, are screened in their original languages with Italian and English subtitles.
[8IMA

This pair of stacked theaters are the last surviving Edwardian stacked theaters in the world, built in 1913 by Marcus Loew’s chain of theaters. The Winter Garden Theater which sits seven floors above the Elgin theater is an atmospheric country garden under the stars. The Elgin Theater, on the other hand, has a more formal design with gold leaf, rich fabrics and ornate opera boxes. In 1928 the Winter Garden Theater was shut down and remained closed for about sixty years until it was reopened in 1989 after a massive restoration of both theaters.

This curiously shaped building cannot be missed as it sits near the center of Groningen. The pop-up movie theater Infoversum was specifically designed for 3D cinema and was the first full-dome digital theater in The Netherlands. The 23-meter wide dome, a 20×20 meter screen backed up by 8 projectors, 60 speakers and 4 sub-woofers add to the 3D viewing experience. We recommend staying at one of the 11 Best Hotels in Groningen near this attraction.

Originally known as the Theater Tuschinski, the Pathé Tuschinski, which was commissioned in 1921 is considered to be one of the most beautiful cinemas in the world. The iconic theater was renovated in its original style between 1998 and 2002 and also expanded with a modern wing. A mix of styles containing Asian influences and a lobby that creates a feeling of stepping into an illusion makes the interiors stand out. The main auditorium currently has 740 seating sets including love seats and private boxes.

Cineteca Madrid is a part of Matedero Madrid which was once a slaughterhouse and livestock market. Built in 1911, the buildings were used as a slaughterhouse until 1996. The Madrid City Council decided to renovate the site and convert it into an art center which it is today. Cineteca Madrid claims to be the pioneer and only cinema in the country to solely project non-fiction films. You can watch films for free here. Planning to visit? Make sure to stay at one of the 11 Best Hotels in Madrid.