11 Biggest Caves in the USA 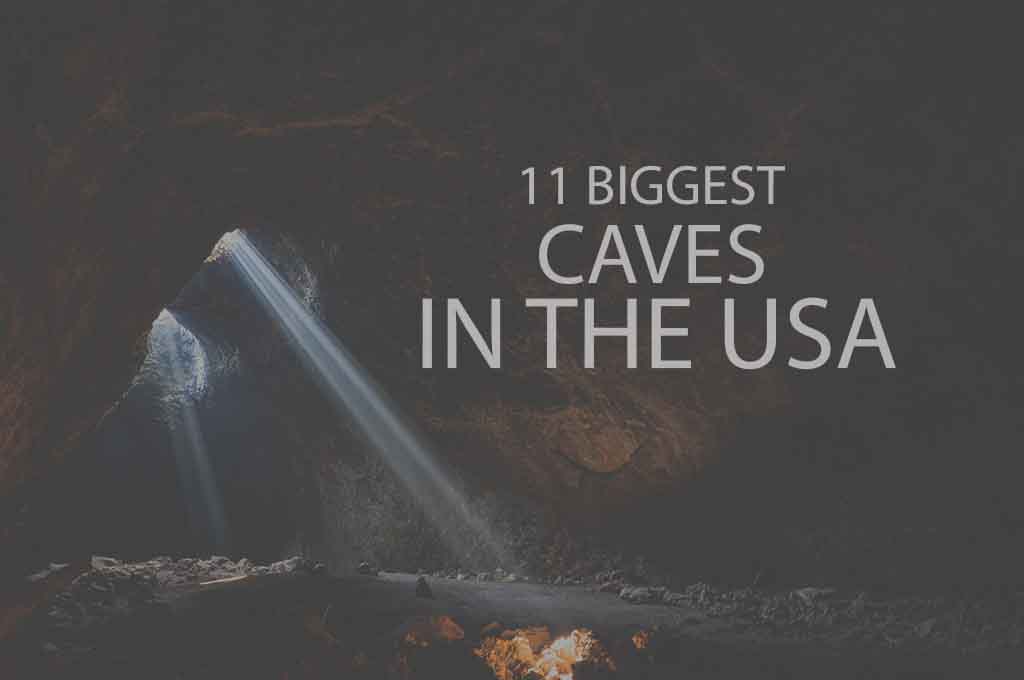 Caves have always had a haunting allure for what lies beneath the surface, in the darkness. While caving enthusiasts plunge headlong into a cave without a second thought, others feel claustrophobic. However, entering the biggest cave in the USA will erase those fears. Stretching for miles, some of the biggest caves in USA are pretty spellbinding.

Spectacular rock formations, dazzling calcite crystals, and fascinating water bodies will entice you to linger. Formed over thousands of years, many of these caves were discovered by chance. Most have been open to the public since the early 20th century.

Showcasing some amazing limestone formations, the Natural Bridge Caverns in Texas stands out among the biggest caves in USA. While it may not be the biggest cave in the USA, they are the largest known commercial cavern in Texas.

The cave gets its name from the 60ft natural limestone slab bridge that spans the entrance. You’ll find many other mesmerizing structures within the cave formed from limestone. The temperature within the cave remains cool at 21 degrees Celsius.

Located halfway between San Antonio and New Braunfels, the caverns can only be visited as part of a guided tour. These caverns also feature on our list of the best places to visit in Texas.

Often referred to as “the twin caves,” the Mystic Caverns and Crystal Dome in Harrison contain more formations per foot than any other Arkansas caves. Located on the Arkansas Highway 7 Scenic Byway, the caves are just within 120 meters of each other. Although there is another cave on the site, the public cannot visit it as it is too dangerous.

Making up some of the biggest caves in the USA, Mystic Caverns has been commercially operated since the late 1920s. Before being renamed the Mystic Caverns in the 1950s, the caves were formerly called Mansion Cave and Wild Horse Cave. Due to the efforts to preserve these caves, new formations are still being created. You can visit the caves on a guided tour that lasts over an hour.

The Ohio Caverns may not be the biggest cave in the USA, but it is one of the most colorful caverns. With over 2 miles of surveyed passageways that go as low as 30 to 103 feet, these are the largest in the state of Ohio. Originally an aquifer that held an underground river, the cave formations are still active today.

Open throughout the year; the Ohio Caverns is a private family-owned business. A guided tour of approximately an hour will enable you to understand all that there is to see in what is one of the biggest caves in USA. The team does its bit to protect the natural beauty of the cave. Directly above the caverns, you’ll find a well-maintained park with newly renovated restrooms.

Texas has some incredible land formations, visible in the best state parks in Texas. If exploring the parks is on your agenda, a trip to the Caverns of Sonora should also be on the cards. These caves, recognized as one of the most beautiful show caves on the planet, lie 15 miles southwest of Sonora on I-10 and are worth your time.

The stunning array of calcite crystal formations, especially the helictites, will take your breath away. At one time, the cave’s most famous formation was the butterfly, formed by two fishtail helictite growths. However, in 2006 a part of the right wing broke off. Today, the “snake pit” with its densely packed helictites is one of the most popular spots in what could be the biggest cave in the USA.

You’ll find the astounding Meramec Caverns under the rolling hills of the Meramec Valley. These underground formations, which formed over thousands of years from the erosion of limestone deposits, are quite stunning. These caves are hard to miss, with numerous billboards along Interstate 44 extolling their beauty.

Given its popularity, this is one of the most visited caves in Missouri. Like most of the biggest caves in USA, these caves were also opened to the public as far back as 1935. Before this, however, it was used for extracting saltpeter to manufacture gunpowder. Legendary outlaw Jesse James is also said to have made the cave his hideout!

Since its discovery in 1878, the Luray Cave in Virginia has been a magnet for visitors. While the vast array of stalactites and stalagmites will undoubtedly capture your attention, the Great Stalacpipe Organ is the main attraction here.

This electrically actuated lithophone covers 3.5 acres of the cave. Considered the world’s largest instrument, a custom console produces various tones from the tapping of ancient stalactites. It took three years to create by finding and shaving various stalactites to produce specific notes. Also of note is the fried egg formations at the entrance.

While most people have heard of the astounding Niagara Falls, one of the top tourist attractions in the USA, not many would know about the Niagara Cave. Located in Harmony, Minnesota, the privately owned cave has much to show. You won’t just see stalactites and stalagmites here but also an underground stream and a 60-foot waterfall, hence the name.

First discovered in 1924, the cave opened to the public a decade later. An interesting feature of the cave is the wedding chapel, where over 400 wedding ceremonies have been performed.

If you’re curious about what is the biggest cave in the USA, the Wind Cave National Park might be your answer. Just north of the town of Hot Springs in South Dakota, it holds the distinction of being the first cave to become a national park. Known for the boxwork formations, which make up 95 percent of the world’s discovered boxwork, it is the densest cave system in the world.

The cave gets its name from the passages in the park which are said to “breathe.” The constant air circulation changes the cave’s air pressure, creating this effect. Revered by the Sioux, the Wind Cave has contributed to many fables and traditions of the indigenous people.

The second deepest cave in the continental United States, the Lechuguilla Cave, lies in Carlsbad Caverns National Park. Renowned for its unusual geology and rare formations, tourists cannot visit the cave. Entry is only for scientific researchers and exploration teams.

Lechuguilla Cave did not feature on the list of caves to visit until a breakthrough discovery in 1986. The discovery of rare speleothems and formations soon piqued the interest of explorers. The pristine beauty of the cave brings in cavers from different parts of the world keen to explore its passages and geology. It was also the site for one of the first documentaries in the cave by the Denver Museum of Nature and Science.

Another of the biggest caves in USA, the Jewel Cave is currently the third longest cave in the world, with 336.87 km of mapped passageways. Two local prospectors discovered the cave by chance when they felt cold air blowing out of a small hole. After expanding the entrance of the cave with dynamite, the brothers discovered an amazing sight of calcite crystals lining the cave.

This cave is also a breathing cave through which air enters and exits with a change in atmospheric pressure. Additionally, the cave also features unique hydromagnesite balloons. The cave west of the town of Custer in the Black Hills became a national monument in 1908. It is open throughout the year with three tours on offer.

The name itself will conjure up a myriad of images for the Mammoth Cave that lies within Mammoth Cave National Park in Kentucky. As the longest cave system worldwide and one of the biggest caves in the world, the cave is immense, earning it a badge as a World Heritage Site. There is much to explore here with complex labyrinths, steep hills, and dusty tunnels.

You can choose from one of several cave tours offered by the National Park Service. Two of the more popular tours are where visitors carry paraffin lamps and marvel at the formations. If you’re one up for an adventure, you could try one of the ‘wild’ tours that involve muddy crawls and dusty tunnels. The less adventurous could try the lighted tours. Notable features of the cave are Fat Man’s Misery, Grand Avenue, and Frozen Niagara.