11 Biggest Caves in the World 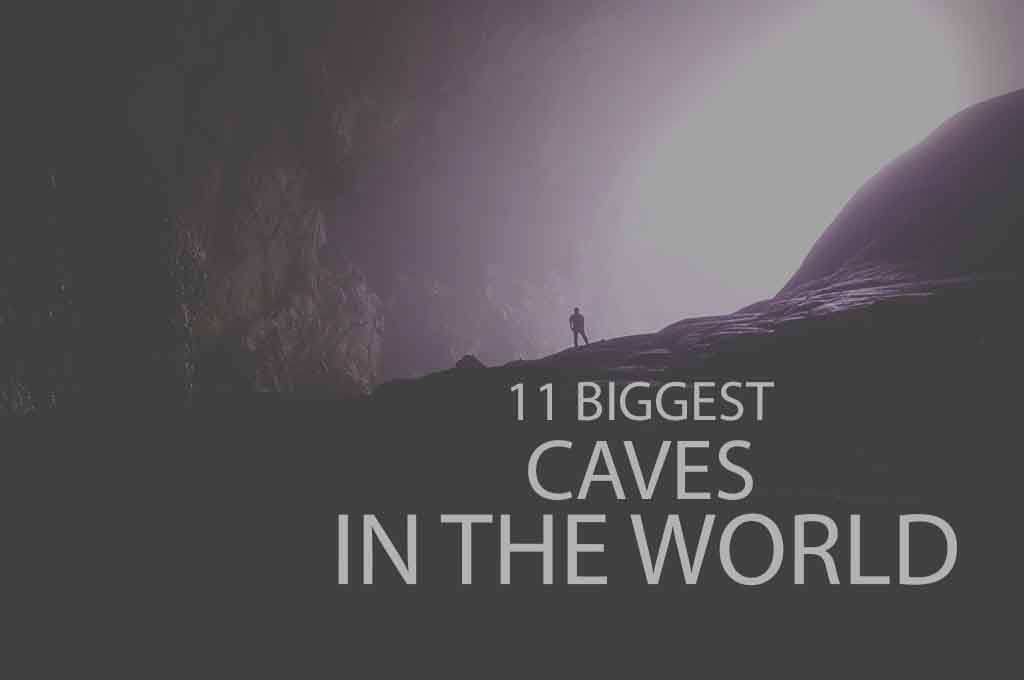 Caves are one of the earth’s most gorgeous, haunting, and magical formations. They’re seen as a gateway to the planet’s past and testament to how the earth has evolved. They have always sparked human interest, whether you’re a historian or a sports enthusiast, as we get another glimpse of history as we advance into these tunnels. While some are inaccessible to tourists, many of the most popular largest, and biggest caves in the world are home to spectacular rock formations, mesmerizing water bodies, and other fascinating features. It’s rather humbling that some of the world’s biggest caves are so large that they can house 40-storeyed skyscrapers. In fact, some of the largest ones can encompass entire New York City blocks within them! Are you interested in exploring them now? Here are the 11 biggest and largest caves in the world.

The Mulu Caves is one of the biggest caves in the world. They lie in the spectacular UNESCO World Heritage Site of Gunung Mulu National Park on Borneo, one of the world’s largest islands. In fact, they’re home to the largest cave chamber in the world by surface area and one of the earth’s largest cave passages! We’re talking about the Sarawak Chamber, which is more than 260 feet high, nearly 2,000 feet long, and measures 1.66 million square feet! It’s so large that it could hold nearly 40 Boeing 747 airplanes within its folds!

Furthermore, it’s home to the Deer Chamber, one of the earth’s largest cave passages. Moreover, this chamber is so massive that it could fit at least five huge cathedrals within its cavernous walls. However, you should know that thousands of bats live within these grottoes. They exit them every day around sunset in one magnificent display to look for food.

The second cavern on this list is another spectacular system in Gunung Mulu National Park, the Clearwater Cave System. The limestone system, which lies in Miri, Sarawak, isn’t a single cavern but a series of interconnected ones. On its own, Clearwater is more than 30 miles (48 km) long, but the cave system is more than just its longest member. The late-1970s discovered cave system also has a host of unique rock formations, an underground river, and an exceptionally large passage. In fact, it’s the longest of its kind in entire Southeast Asia and is a major tourist attraction. Since no one knows the cavern’s true size, many parts of the system are still being discovered today.

The mineral formations-filled Lechuguilla Cave is one of the biggest caves in the world. The gypsum and limestone cave lies within the cavernous Carlsbad Caverns National Park in New Mexico and spans more than 138 miles (222 km). You’ll find lots of exciting mineral formations that have piqued the interest of geologists around the world. What’s more, the cavern is 150 miles long (242 km) and 489 meters (1,600 feet) deep. Thus, it’s the second deepest cave in the Americas and possibly the deepest in the United States.

Although the grottoes were discovered way back in the 1950s, Colorado didn’t permit the cave to be explored further for almost three decades. In 1984, the National Park Service finally authorized a group of Colorado potholders to begin digging. They made a breakthrough into the huge walking corridors in May 1986, discovering one of the most thrilling cave systems in the world.

Wind Cave in the eponymous National Park in South Dakota is one of the oldest of its kind in the country. This “maze cave” is called so because of its convoluted structure and build and a warren of underground passages. It’s particularly noteworthy for its frostwork and being home to 95% of the world’s discovered boxwork calcite formations. Furthermore, the grotto is famous for being the densest cave system in the world, with an almost staggering density. Around 154 miles (248 km) of passageways of the cavern have been excavated so far, despite having the largest channel volume per cubic mile.

Wind Cave is called so because, well, it’s windy. But why? Despite being such a huge system, it has very few entrances. So, air constantly flows in and out to equalize the atmospheric pressure inside and outside. Thus, it results in a “breathing” phenomenon, which we feel like a strong wind flow. If that wasn’t enough, the National Park brims with picturesque views and is a protective habitat for local wildlife.

Interestingly, Wind Cave National Park is part of the Black Hills, famously home to Mount Rushmore, one of the USA’s top tourist attractions.

One of the biggest caves in the world is also amongst the most mysterious systems that are also full of surprises. We’re talking about the Shuanghedong Cave Network in the Guizhou Province in the heart of mainland China. It’s also China’s longest cave and is as secluded as it’s enormous. What’s more, the system runs for more than 150 miles (241 km) and was discovered way back in 1987. Plus, it’s one of the finest examples of underground ecosystems with at least three rivers in the lower levels! If that wasn’t enough, there are also innumerable waterfalls, making these water bodies thriving for salamanders, fish, and other marine life.

Even though people discovered it in the late 1980s, there have been only around 20 expeditions due to political and geographical hindrances. But much of the cavern is yet to be explored, and the uncharted territory is vast.

Ukraine’s Optymistychna Cave earns the top spot for the longest gypsum cave in the world, extending for more than 161 miles (259 km)! So, it’s no surprise that it features as many as 10 different areas based on the many gypsum varieties and passage structures. This Korolivka cavern is also famous as a maze cave since it’s extremely elaborate and, thus, very complicated to navigate. However, that doesn’t mean that visitors can’t visit. A quick tip; you need to be prepared for a lot of muddy walking, especially in the cave’s depths.

Optymistychna Cave, which means “optimistic,” was first discovered in 1965. In fact, experts didn’t expect it to be more than a few miles in length or depth. However, the Tsyklop Club’s optimistic members went on further expeditions, hence the name. What’s more, it’s the fifth-largest cave in the world and also Eurasia’s longest cave. Clearly, the grotto’s name is an ode to those who had faith in it and its cavernous depths.

We now come to the other side of the world in Mexico, where one of the biggest caves in the world lie; Sistema Ox Bel Ha. This spectacular cavern is tucked in the heart of the Yucatan Peninsula, famous for Mayan ruins, crystal-clear waters, and sandy beaches. However, this underground gem of a cavern system is one of the peninsula’s best sights to see and experience and measures a total length of a whopping 167 miles (270 km)!

Interestingly, Ox Bel Ha lies within a 30-mile (48 km) radius of Mexico’s other largest cave system, Sistema Dos Ojos, which is a famous cenote. Experts think that the 1996-discovered Ox Bel Ha had begun forming as many as 18,000 years ago! The name comes from the Yucatec Maya language and means “Three Paths of Water.” In fact, it’s one of the vital freshwater sources in the region. However, Ox Bel Ha has been riddled with the effects of climate change, becoming quite flooded.

Interestingly, the Yucatan is famous for cenotes, including the Taak Bi Ha Cenote, considered one of the most silent places on earth!

South Dakota is home to yet another spectacular cavern system, the Jewel cave. This is one of the more aesthetically pleasing caves and is a must-see attraction. The cavern sits in the Black Hills National Forest, almost on the South Dakota Wyoming border. This gem – pun unintended – is named so because it’s full of colorful crystals on the inner corners. So, there might not be jewels here, but that doesn’t mean that the beautiful ave is any less gorgeous. Choose from three tours, of which the scenic tour, which is an elevator loop through the cave’s central portion, is the shortest. We’d highly recommend the historical tour, a candlelight tour through the cavern’s originally discovered portion.

However, intrepid enthusiasts will love the wild caving tour, which takes you through the undeveloped, uncharted, and ‘wild’ zone. With treks and water wading in the dark, this one is only for the brave!

As mentioned earlier, Sistema Dos Ojos is one of the biggest caves in the world. The 1987-discovered grotto system lies in Tulum in Mexico’s Quintana Roo and has hooked explorers ever since. For one, the limestone cavern runs for more than 200 miles (320 km)! Secondly, it’s connected to the underwater cavern of Sistema Sac Atun, making them both larger than most other cave systems in the Yucatan. In fact, it’s no wonder that after people discovered this channel, this system became the largest underwater cave in existence. Sac Atun is about the same length, stretching 214 miles (345 km).

However, what makes the place stand out is that it’s a prime archeological site. Discoveries in this cavern system have led to the unearthing of many local Mayan and other cultures.

When a cave is called mammoth, you know it will be, well, mammoth! Kentucky’s Mammoth Cave was discovered almost 4,000 years ago, and people are still discovering it! In fact, it’s not known how far the cavern system actually extends, but the current record is that it stretches for at least 365 miles (587 km) – whew! What’s more, people are constantly discovering new caverns and grottoes in this underground system. So, there’s no telling just how huge the entire cavern system is. This stunning cave system has a massive variety of stalactite formations that have formed over the last millennia.

Unlike most other systems on this list, Mammoth’s history spans thousands of years, and the cavern is geologically, politically, and spiritually important. For instance, Native American remains were found in the cave. There are even remnants of the War of 1812. Finally, it was joined with the Flint Ridge System in 1972, becoming the longest cave system in the world.

The world’s biggest cave is even bigger than we thought! Behold Son Doong in Vietnam, the biggest caves in the world. A local first discovered the cavern in 1991, after which a British team led a groundbreaking dive to discover this place, which means “Mountain River Cave,” in 2009. They discovered an underwater tunnel connecting another enormous cave Hang Thung with Son Doong. Together, they can fit a New York City block with 40-storied skyscrapers within them!

With Son Doong measuring 1.35 bn. cubic ft. and Hang Thung measuring 56 mn. cubic ft. in volume, it’s like someone finding another mountain atop Mount Everest! On the inside, the massive limestone cavern has diverse scenery and various microclimates, including two jungles! The three-million-year-old cave opened to tourists in 2013 and opened up experiences no one had ever done before. For instance, there’s a passage with beautiful 400-million-year-old fossils. Oxalis, one of the original companies that led expeditions into the cavern, is the only one that conducts guided tours into the grotto.

To explore, travelers must book a guided excursion through Oxalis.

Don’t be fooled; the trek to the caves is not an easy one and has everything from wall climbing and river crossings to jungle treks for 4 days across 15.5 miles (25 km) in the Vietnamese jungles! Plus, there’s lots of wildlife, such as monkeys, bords, and more. And, of course, the trail is muddy – very, very muddy!