13 Most Silent Places on Earth 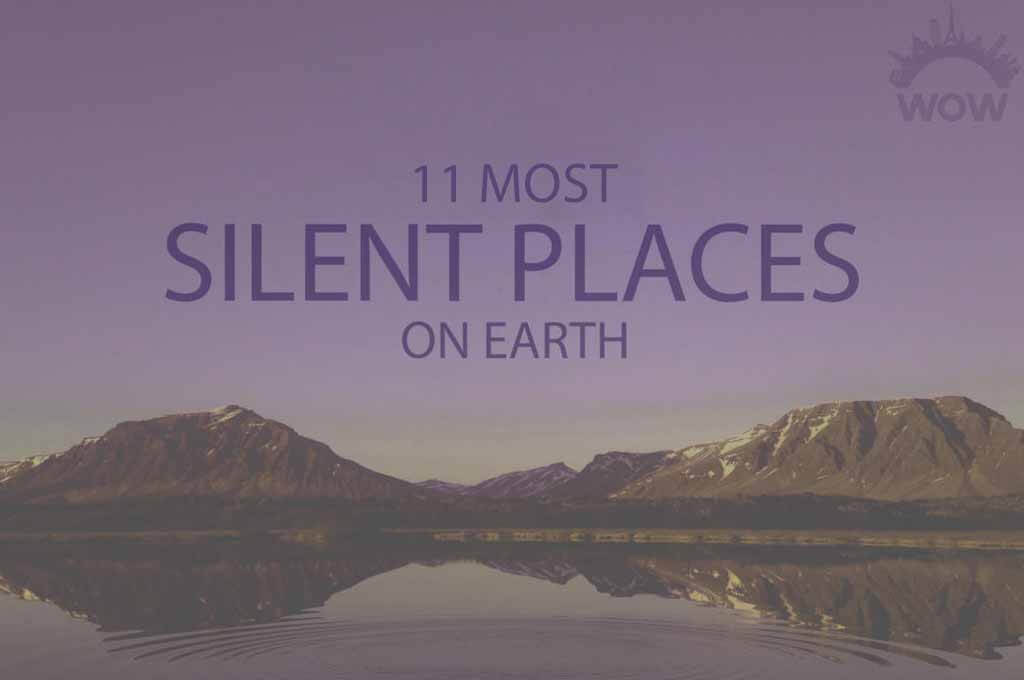 One of the criteria for zeroing in on a silent space is to cancel out places that receive artificial light. Many sounds such as mining, agriculture, and other human sounds will be eliminated where there is no electricity. However, while many places may appear tranquil, an airplane overhead will shatter that tranquility. That is possibly one of the reasons why the most silent place in the world exists inside the environs of a building. Before you go rushing off to experience this solitude, be warned. An article in the Smithsonian claims that “Earth’s quietest place will drive you crazy in 45 minutes!”

Although the Haleakala National Park in Hawaii is popular with tourists, there is an area of the park where the public cannot go. A part of the Kipahulu section of the park demarcated as a biological reserve is out of bounds to the public to protect the native species. As such, apart from the occasional sound of an animal, this is another silent place on earth.

Most areas of the park are pretty remote, so you will find plenty of silent zones here. However, finding the most silent place on earth in this area may be difficult. Haleakala is a dormant volcano revered by the locals. This area of the park is more popular with visitors who head to the crater. It’s also one of the best places in the United States to gaze at the stars.

One of the largest salt flats in the world, the Makgadikgadi Pans National Park stands out as a silent place on earth during certain months. While the pans are accessible during the dry season, the onset of the rains makes the roads here inaccessible, drowning out all noise.

During the tourist months, silence is a distant hope with safari rides, people, and animals in abundance. However, in the latter months leading up to the rains, the change in weather forces the animals to migrate. Since the park has become quite inaccessible, silence prevails during these months.

The Kronotsky Nature Reserve sprawls across the remote Russian Far East region. This reserve is one of the quietest places on earth because very few people are allowed to visit. It is mainly accessible to scientists, and a small select number of tourists permitted a single day’s visit. Given its often harsh climate, you can only visit the area at certain times.

Although people intermittently frequent the reserve, it cannot be dubbed the most silent place on earth because of the volcanoes and geysers. Part of the Volcanoes of Kamchatka, a UNESCO World Heritage Site, the reserve is often described as the Land of Fire and Ice. Additionally, it has the second-largest concentration of geysers in the world.

Cenotes are freshwater sinkholes in the jungle formed over a considerable period of time. The underwater caves of the Yucatan Peninsula are pretty breathtaking, but the Taak Bi Ha Cenote is one of the best. When tourists do not overrun it, the underwater cave is a haven of peace, making you feel like it’s the most silent place on earth. You may hear the occasional sound of dripping water, but that’s the only thing you will listen to if you’re alone.

Located on the Riviera Maya, it’s about a 20-minute drive from Tulum or 40 minutes from Playa Del Carmen. Many visitors choose to have a dip in the cenote. However, before entering the water, you will need to wash off any sunscreen or repellent to keep the natural pools clear.

One of the quietest places in the United States and possibly the most silent place on earth is the Hoh Rain Forest of the Olympic National Park. The One Square Inch of Silence within the forest is an independent research project. The project aims to preserve and protect the space from human noise intrusions, creating another silent place in the world. It wants people to connect to the land by listening to the sound of nature. Therefore it is often monitored for noise intrusions.

The Olympic National Park is a sprawling reserve covering almost a million acres. Within this reserve, you’ll find the luscious Hoh Rain Forest. As one of the finest remaining examples of temperate rainforest in the United States, it is highly popular with visitors. While it may not be one of the most amazing national parks on the earth, the reserve is worth visiting.

In the heart of Iceland‘s southern Highlands, you’ll find Landmannalaugar, an area that will take your breath away. Made of windswept rhyolite mountains, you’ll be swept away by the dazzling arrays of color. Famous for its natural geothermal baths, the place’s name translates as ‘People’s Pools.’

From mid-June to mid-September, Landmannalaugar sees a good footfall of visitors. However, silence reigns in the off-season when the only sound is that of nature, making it another silent place in the world.

Kielder Mires is one of the peat bog sites adjacent to the Kielder Forest, the largest manmade woodland in England. This remote corner of Northumberland has about 60 peat bogs that help negate the effect of global warming. One of these Mires, a 500 meter by 500-meter square, was declared the quietest place in England and consequently another silent place on earth.

Declared by the Campaign to Protect Rural England (CPRE) as one of the most tranquil places in the country, Kielder Mire is in proximity to a military training area. The spot is away from all roads and is only accessible by foot. Also, there is no phone signal for miles. However, on a training day, the area is anything but tranquil!

Located near the village of Val Marie, Saskatchewan, the Grasslands National Park in Canada is one of the few remaining areas of undisturbed dry prairie grassland. While the park does receive many visitors, certain parts of the park remain unexplored. These areas are possibly some of the most silent places on earth.

Established in 1981, the park and the surrounding area are home to the country’s only black-tailed prairie dog colonies. You can also spot bison and other animals here. The park also is a ‘dark-sky preserve,’ an area that restricts artificial light pollution.

The Kelso Dunes is the most popular trail at the Mojave Preserve in the United States, yet it offers immense solitude. You won’t find a permanent path to the dunes as the wind and sand constantly reshapes them. What makes these dunes unique is the booming sound you may feel under your feet. This ‘singing sand’ is a low-frequency sound that is experienced rather than felt.

The dunes keep visitors far, given its harsh environment and scorching summer heat. Wildlife, planes, and cars are almost non-existent here, paving the way for another silent place on earth. Early morning is the best time to enjoy this quiet when the winds calm down.

Antarctica immediately comes to mind when it comes to areas with minimal artificial light. The frozen continent is a land of extremes with the coldest and driest weather on earth. Surprisingly, this area of the world does see a large number of tourists in the summer. It would rank the most silent place on earth if it were not for the tourist boats that sail here in summer or the research planes.

For one thing, no commercial flights travel across Antarctica, which cuts out plenty of sounds. The most popular method of getting here for non-researchers is by cruise ship. In winter, however, you can rate it as the most silent place in the world. During this time of year, the hostile weather conditions make it unsafe for travel. Another feature that adds to the silence is the lack of running water, wind, or leaves!

Ecuador’s biggest attraction may be the Galapagos Islands, but the Ecuadorian Amazon is not too far behind. Home to an astounding array of biodiversity, the rainforest also has some of the most silent places in the world. Deep in the forest, you’ll find one of the most tranquil spaces on earth, free from disturbances.

Spread over one-third of Ecuador’s land area, there is an astounding range of species within the forest. Visitors can either explore the Napo River System on an Amazon cruise or choose to stay in a lodge.

The lab is used for product testing and development. While members of the public are allowed to visit the silent room, they are only allowed for a short, supervised stay. However, staying for extended periods in the room can be quite disconcerting. When the sounds of your body are the only thing you hear, it can play on your other senses.

The crown for the most silent place on earth goes to the Microsoft Research lab in Redmond, Washington. Within Building 87 of the sprawling facility, you’ll find the anechoic chamber, which took two years to design. The echoless chamber comes close to the absolute zero of sound.

Enveloped by six layers of concrete and steel, sound from the outside world is blocked out. The floor, ceiling, and walls are also covered by fiberglass wedges so that sound waves cannot reverberate back. As with most anechoic chambers, this room is also used for testing sound equipment and electronic devices.