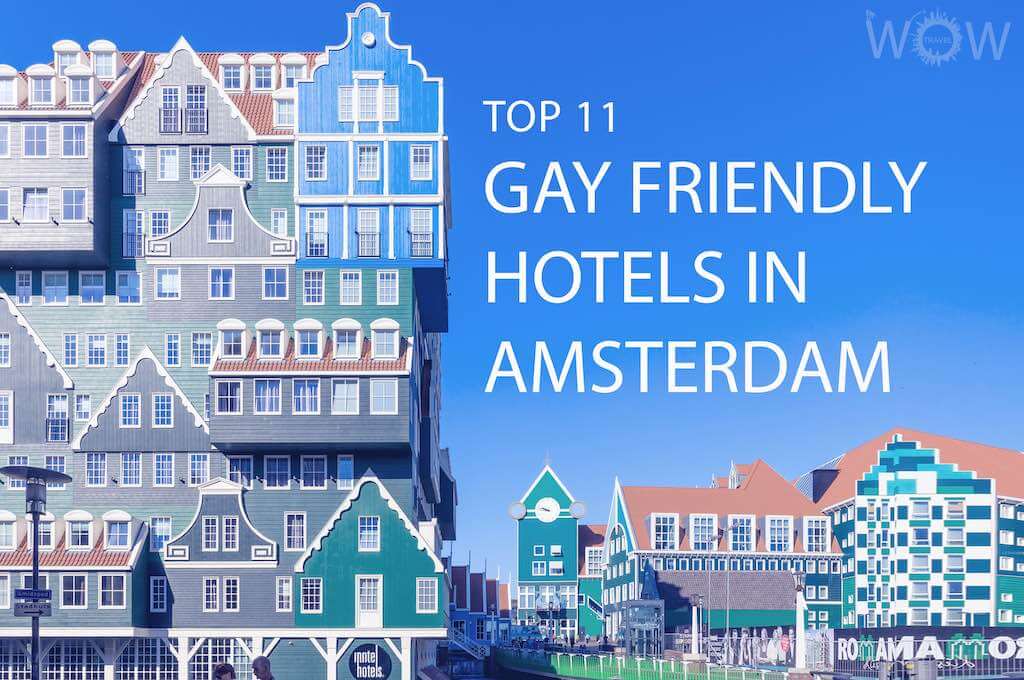 Amsterdam has a long tradition of tolerance for the LGBT community. The city was previously the world’s leading gay destination. Then, The Netherlands was the first country to allow civil marriages between same-sex couples. Consequently, it remains a first-choice destination for the LGBTQ culture. This hot destination is one of the most gay-friendly cities in the world. As a matter of fact, Amsterdam has a considerably large gay scene which includes cruise bars, gay-themed events, fetish club, and gay sauna. Discover the Top 11 amazing gay hotels in Amsterdam city center.

Sofitel Legend is located in the Old Center of Amsterdam and is a member of the Accor group. The hotel was formerly a 16th-century royal guesthouse. It is ideally positioned between two scenic canals and close to the Red Light District where the gay nightlife is particularly rich and interesting. While staying at this luxury hotel, you can walk to bars such as Boysclub 21 and Club NYX. Whether you want to meet cubs or enjoy bear weekends, themed events at Dirty Dicks will blow your mind!

Sofitel Legend’s staff is always pleased to welcome LGBTQ travelers as it is a member of IGLTA. Everything at this iconic hotel will make you feel like a royal. The spa providing private couple treatments, the in-house Michelin star restaurant, the indoor swimming pool and the private boat for canal cruising will amaze you. Bridges Dining serves delicious fish and you can order traditional Dutch brown café at The Flying Dutchman. Sofitel is definitely one of the most visited gay destinations in Amsterdam.
Check Rates & Book Now

Inntel Amsterdam is located on a traffic-free square in the Old Town, more precisely between Amsterdam Centraal and Dam Square. While staying at the hotel, you can easily reach the canals, all the city highlights such as gay leather fetish and cruise clubs. Very popular among gay travelers, Inntel hotel offers more than 200 stylish guest rooms. To complement its cozy ambiance, the hotel provides free Wi-Fi, tea and coffee makers, satellite TV, private bathroom, safe and minibar.

The meals served at Humphrey’s Restaurant, next to the hotel, are fantastic. The bill for your meal can be charged to your guest’s account and it is more convenient. Shops such as Gays & Gadgets, romantic restaurants, as well as the popular Nieuwezijds Gay Sauna are less than 5 minutes’ walking distance from the hotel. You will discover The WEB, an exquisite gay cruise & fetish club which is only 1 minute away. Henceforth, this exciting place is also a renowned pickup bar.
Check Rates & Book Now

The quintessential Amistad Hotel is in downtown Amsterdam and run by a small international group of gay men. They warmly welcome any type of guests, no matter if they are homosexual, straight or questioning. This affordable gay hotel in Amsterdam offers well-appointed rooms. It is close to Reguliersdwarsstraat and less than 100 meters from Church, the popular cruise club. As there is a convenient tram stop some steps away, you can easily visit the rest of the city.

For guests who wish to have more independence, Amistad proposes apartments scattered all over Amsterdam. If you prefer to have more of a boutique experience, you can take advantage of the B&B next to the hotel which is operated by the same owner. The price for a single room starts at €50 per night and you can even book rooms with en-suite options.
Check Rates & Book Now

W Amsterdam is a modern and trendy luxury hotel actively marketed towards Millennials. This gay hotel in Amsterdam city center, managed by the Marriott group strongly supports gay travelers. In fact, most people love this hotel because the brand is well known for being gay-friendly worldwide. Their most recent campaign for the LGBTQ community is the #lovetravels.

Are you looking for the best place to avoid lounge lizards and party until the morning light? Queen’s Head, one of Amsterdam’s oldest gay bars is a must-visit!
Check Rates & Book Now

DoubleTree hotel is a very modern and large hotel extremely well located in Amsterdam city center. This haven is next to Amsterdam Centraal and not far from several gay cruise clubs and bars near Warmoesstraat. Equally important, you can chill at the historic Café ’t Mandje nearby. The rooms offered by the hotel are soundproof and highlight exceptional amenities. When guests are in the SkyLounge Amsterdam, they can appreciate spectacular views of the historic city and IJ river.

When you book a room at this gay hotel in Amsterdam city center, you will take advantage of famous shopping centers and landmarks. This includes the different congress centers and all the city’s cultural heritage such as the Homomonument. Ready to book a stay at one of the 11 Best Hotels in Amsterdam?
Check Rates & Book Now

Andaz, owned by the Hyatt group is located amidst the business area of Amsterdam. This 5-star luxury hotel is considered as a popular venue for gay weddings, anniversaries and other special occasions. Moreover, the rooms decorated by the famous Dutch designer Marcel Wanders are exquisite. Some of them feature the extraordinary panorama of the Prinsengracht canal or give stunning views of the accommodation’s pretty courtyard.
This pet-friendly hotel is only a quick walk away from the top sights of Amsterdam such as the Rijksmuseum, Anne Frank House, and Dam Square. Furthermore, it is also convenient to access the 9 streets shopping area and not far from SOHO in Leidseplein. Andaz hotel will undoubtedly turn your trip into a memorable one.
Check Rates & Book Now

ClinkNOORD is only 10 minutes away from the lively streets of downtown Amsterdam. This hostel benefits from all the advantages that this region can offer. At this gay hotel in Amsterdam, you can meet other travelers while drinking coffee or sharing beers at their on-site bar. Sometimes, you will be able to use their kitchen to cook your own meals even if there is an on-site cafe. ZincBAR, the on-site bar proposes live music. You may not find ClinkNOORD as gay-friendly as some other well-known hotels. However, it is the kind of place where you can stay without feeling rejected for being an LGBTQ traveler!
Check Rates & Book Now

Anco is strategically located in the heart of the Red Light District and was formerly a men-only gay hotel since 1962. It is nestled on a 17th Century canal. Nowadays, their friendly and good-humored staff welcomes all guests. However, it is still more oriented toward gay tourists. When you stay at this extraordinary hotel, you can entertain yourself at Escape, Paradiso or Club air.

For visitors who want easy access to the gay bars on Warmoesstraat and the Zeedijk, Anco is a fabulous spot. These are just a few blocks away from the hotel. The rooms that are offered in this beautiful hotel are outstanding. You can either choose studios that come with mini kitchens or more traditional rooms ranging from single up to 4 bedrooms.
Check Rates & Book Now

The Albus is proud to offer a contemporary design to its valuable guests. In addition to this feature, the popular gay landmarks are within walking distance. This relaxed and tolerant 4-star gay hotel in Amsterdam city center is opposite the famous Kalverstraat shopping street. Attractions such as the Van Gogh Museum and Rembrandt Square are a few minutes’ walk away. If you like to enjoy drinks at trendy bars or dine in exquisite restaurants, the modern and stylish Senses restaurant will amaze you.
Check Rates & Book Now

Park Plaza Victoria is a great-value hotel is built in a historical building opposite to Amsterdam Centraal. Trams, shops, canal boats, and restaurants are easily accessible. The hotel’s location will offer you the opportunity of going to incredible gay cruise bars located around Warmoesstraat such as EAGLE Amsterdam and The WEB. Equally close to this charming gay hotel in Amsterdam center is the popular sauna Nieuwezijds. The Urban Wing guests’ rooms of Park Plaza have a nice modern design and superior rooms are more or less classically themed.

Banks Mansion is a stylish Art Deco boutique hotel. It is perfectly located between the Central Station and Museumplein, close to major areas and a few minutes’ walk from several gay bars such as Taboo. The rooms are air-conditioned, feature a comfortable bed, an en-suite rain shower, and free breakfast. Additionally, each of them has minibars, Nespresso coffee, snacks, movies, WiFi for free too.
Prior to your visit, you can contact this All-inclusive hotel to book a romantic couple massage. In the afternoon, drinks, cheese boards, and nibbles are served in the hotel’s lobby. For instance, you can eat, drink and chill out as much as you want!
Check Rates & Book Now