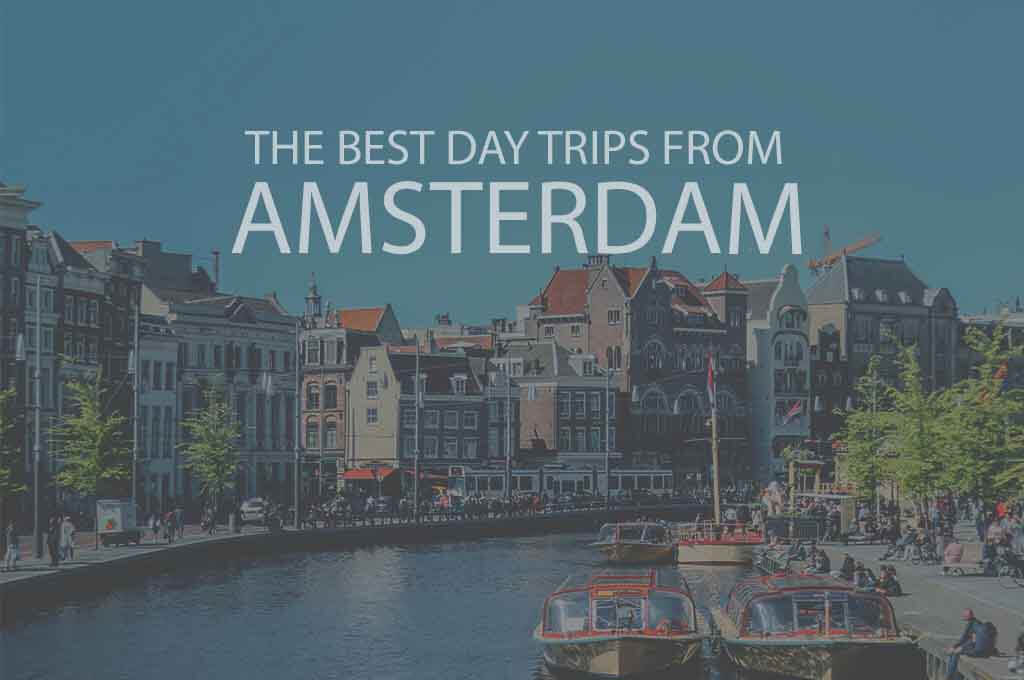 What is Europe’s most exciting city? Tons of spots could fight it out, but few are as well-rounded and fleshed out as Amsterdam. The capital of the Netherlands is Europe’s ultimate eclectic rabbit hole and buzzes with entertainment, culture, history, cuisine, and more. Aside from its world-famous nightlife and genre-defining museums, Amsterdam is famous for being in proximity to some of the most gorgeous vistas and sights in the country. So, the best day trip from Amsterdam ranges from tulips and windmills-filled landscapes to villages filled with canal houses and boats. Amsterdam’s charms might be endless, but it’s not the only beautiful place in the country. Do you want to undertake these amazing day trips but not know where to begin? Here’s our curated list of the 11 best day trips from Amsterdam, the Netherlands.

Just an hour away from Amsterdam lies one of the best national parks in the country, Hoge Veluwe National Park. It’s home to the Kröller Müller Museum, which houses the second-largest collection of Van Gogh paintings in the world! The museum is also home to paintings by other masters and a stunning sculpture garden, one of Europe’s largest.

After visiting the museum, it’s time to explore the gorgeous national park. Your guide could either take you on a scenic tour, or you could grab one of the free and famous white bicycles and enjoy a bike ride. If this Small Group Tour to Kröller Müller and Hoge Veluwe National Park isn’t the best day trip from Amsterdam, then what is?

More than seven million vibrant bulbs are in full bloom on this Day Trip to Keukenhof Gardens and Spring Cruise. These gardens are the most beautiful spring garden in the world. The lovely spring boat tour begins from the ‘Ringvaart’ Canal, taking you through the stunning Amsterdam Kager lakes with ten unique islands. You’ll also spy on spectacular sceneries, including lovely historical mansions, smaller bulb fields, authentic villages, and traditional windmills along the banks.

After a short five-minute shuttle bus ride, you land right at the heart of the tulip fields. The best bit? You get to avoid long queues with this tour and gain fast-track entry into the gardens, which you can explore at your leisure.

Zaanse Schans is famous the world over for the village with windmills, and it’s also the best day trip from Amsterdam. Board an eight-seater modern bus for this Small Group Tour of the Villages and Windmills of Zaanse Schans, a former industrial village. The few surviving ones have even been restored to their original function. So, you’ll see everything from spice and paint mills to oil and even water mills.

You’ll also feast your eyes on warehouses, traditional green-timbered homes, the harbor, and the famous fishing village of Volendam. You’ll even get to have pictures taken in traditional Volendammer costumes! After visiting a cheese factory, dig into lunch at one of the harbor restaurants. The tour wraps up with a visit to the wooden shoe factory and Broek, one of the Waterland area’s most charming villages.

Bike lovers, this Full-Day Bike Tour of Volendam and Marken is for you. Escape the bustle of the city on this amazing eight-hour guided bike tour to the villages north of the city. Your tour begins with a scenic ferry ride, followed by a 1.5-hour bike ride to the northern island of Marken. On the way, you can spy gorgeous vistas of villages such as Uitdam and Durgerdam. Explore Marken, its museums, and markets before catching another ferry to the 1875-built fishing village on Volendam with quaint homes and a bustling harbor.

Listen to tales and anecdotes that your knowledgable guide dishes out as you walk through the older parts of the city. You’ll also get to see a fish auction, the wooden Stolphoevekerk, and even a church. Finally, the tour takes you to the alluring medieval village of Edam with tranquil canals and ancient streets with 17th-century buildings.

History lovers will love this Small Group Tour to the UNESCO World Heritage Site of Kinderdijk and the Hague, which is unarguably the best day trip from Amsterdam. Board a minibus that’ll take you through the picturesque landscapes south of the city to the windmill complex of Kinderdijk. The protected area is full of remnants of human inventiveness, such as pumping stations, mills, and dikes.

After a 1.5-hour guided tour of the village, head to the Hague, also home to the Dutch royal family. A minivan tour of this city takes you to three of the most important landmarks, the Madurodam, Escher in Het Paleis (the former winter palace), and the Mauritshuis, which houses some of the best masterpieces of Dutch paintings from the Golden Age.

One of the best parts about this tour is that your bus even has free Wi-Fi, so you can stay connected on the go.

Explore a whole different side of the country with this 9-hour private Full-Day Tour of Delft and Rotterdam. with a private driver and a guide. Delft is one of the oldest cities in the country and is famous for being home to the “Delft Blue Pottery.” In fact, the city was very important during the Dutch Golden Age. After that, head to one of the Netherlands’ most modern cities, Rotterdam. See some of the top things to do in Rotterdam, such as Townhall, the Erasmus Bridge, and the new Markthal, where you can dig into amazing Dutch cuisine. You also get to see and go inside the famous Cube Houses of Rotterdam, one of the world’s most amazing modern architectural wonders.

This Day Trip to the Dutch Castles from Amsterdam is one of the best day trips from Amsterdam, especially for culture vultures. Your professional guide picks you up from your hotel, wherefrom you head straight to the 13th-century castle of Muiderslot. This truly medieval castle is a UNESCO World Heritage Site and one of the oldest castles in The Netherlands. What’s more, it’s surrounded by a moat and accessible only via a liftable bridge. Talk about medieval fairytales!

Later, visit Castle de Haar, which transports you to a different time and place. This is the Netherlands’ largest castle, complete with gardens, exhibitions, and wonderful history. Your guide regales you with stories about important figures, an array of cultures, and a different era.

This Private Full-Day Sightseeing Tour from Amsterdam to Cologne takes you across the border to one of the most scintillating cities in Germany. One of the best things about this tour to Cologne is that it’s flexible, so you can choose what exactly to want to explore of the top things to do in Cologne. You can explore the Dom of Cologne and the Chocolate Museum, which takes you through the 5000-year of cultural history of cocoa. What’s more, you can even enjoy a boat trip on the waters of the Rhine River. During the day, you can even stop and enjoy a local lunch in one of the best restaurants, Oma’s.

How about a day trip from Amsterdam to one of the best small towns worth visiting in The Netherlands? We’re talking about Giethoorn and this Private Day Tour With Canal Cruise and Windmills from Amsterdam. We’re sure you’ve seen pictures of the postcard-perfect canal town, with fairytale homes set amidst lush gardens right next to a canal, with boats floating up and down the water. This is where you’ll be heading for one whole day!

This private sightseeing tour takes you around this beautiful Dutch village on a canal cruise, where you can capture Insta-worthy pictures for the ‘Gram. Later, visit a clogs factory, a local cheese factory, and some wonderful Dutch windmills. At the clogs factory, you can even see local clog makers make wooden shoes.

In Bruges, anyone? This fabulous Bruges Full-Day Tour From Amsterdam takes you to the fascinating Belgian city in an air-conditioned coach. This city is famous for canals and chocolate, just like Amsterdam, and sits in Western Belgium. After crossing the Dutch border, you arrive in the “Venice of the North,” chock-full of canals and scenic cobblestoned streets. Tour the top things to do in Bruges, including churches and cathedrals, historic structures, and the City Hall at Burg Square. After walking around for half an hour, you can even board a boat for an optional hour-long along some of its very best canals.

This Small Group Half-Day Seal Safari Tour at the UNESCO Site of Waddensea is one of the best day trips from Amsterdam. The UNESCO World Heritage Site of Waddensea coastal wetland is the world’s largest unbroken system of mud flats and intertidal sand. It also covers a maritime conservation area, national parks, and a conservation area. This half-day tour takes you to the Wadden Sea by minivan, after which you’ll explore it via boat at low tide, scouting for birds and seals.

This family-friendly guided tour also takes you to the famous enclosing dike between Friesland and Noord-Holland, as well as one of the Ijsselmeer coast’s historic fisherman’s towns. The best bit is that this tour also includes drinks, a snack, and even a boxed lunch since you’re going to be on the road.

Arnhem is the site of one of the most infamous battles of World War II, and The Battle of Arnhem (from Amsterdam) tour takes you around this historic region. The guided tour picks you up from your hotel and drives you to this green, undulating region. First, you’ll see the infamous drop zones and exactly how far the soldiers had to travel to reach the Arnhem bridge. Next, you’ll also visit the Airborne Museum, after which you’ll see the bridge itself. On the way, you’ll pass many important spots where critical events of the battle took place. Your guide tells you interesting stories, but from the perspective of the citizens and soldiers of that era.

This Full-Day Excursion to Brussels from Amsterdam is the best day trip from Amsterdam to Belgium. Chocolates, waffles, and beers await you on this trip, where you get to see and do some of the top things to do in Brussels. See the Atomium, the Royal Palace, the Palace of Justice, the Tomb of the Unknown Soldier, and the Grand Place, one of Europe’s most beautiful squares. On this guided walk through the historic city center, you’ll even see a demonstration by a chocolatier. After that, you’ll get to taste some famous, melt-in-your-mouth Belgian chocolate. The best bit is that this full-day tour even sets time apart for sightseeing on your own and shopping so that you can stock up on all that chocolate!