Top 9 Things To Do In Rotterdam 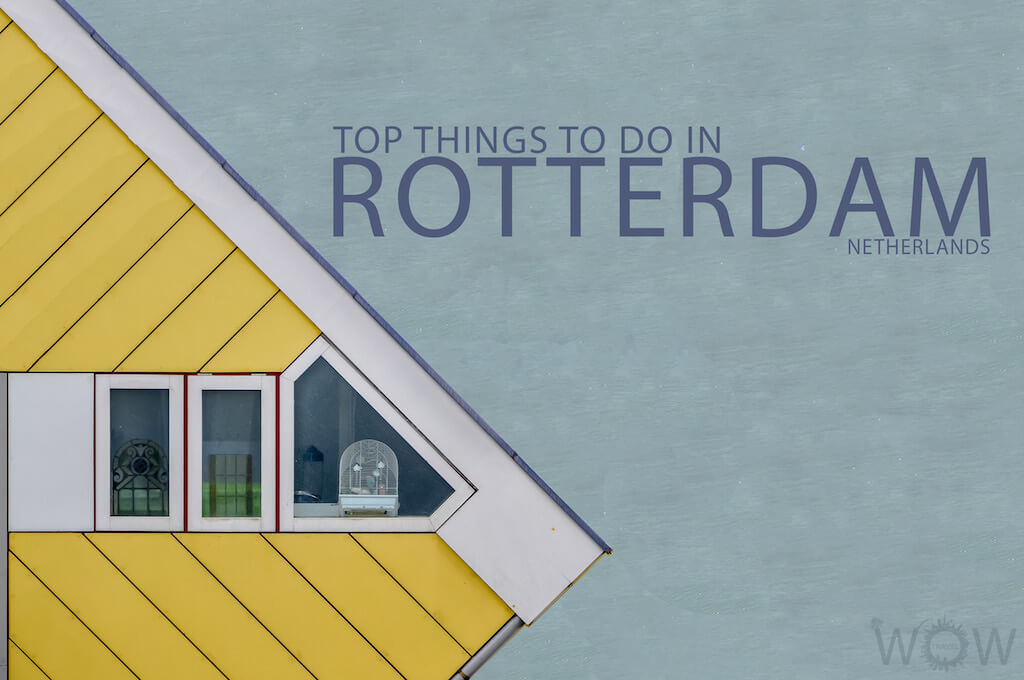 Just an hour south of Amsterdam and two hours north of Brussels, is the young and vibrant city of Rotterdam. As the second biggest city in the Netherlands and with one of the biggest harbors in the world, Rotterdam is definitely worth visiting. It is famous for its groundbreaking architecture, beautiful canals, amazing restaurants and a buzzing night scene. The sighting is not historic and the architecture is not old, but this is what makes Rotterdam stand out. Enjoy our list of the Top 9 Things To Do In Rotterdam.

“Cool architecture is to Rotterdam what yellow taxicabs are to New York: ubiquitous and characterful.” Abi King

Grote of Sint-Laurenskerk is a Gothic church built in 1525, making it the oldest building in the medieval city center of Rotterdam. During the World War II it was severely destroyed, but completely restored between 1952 and 1968. It is possible to climb to the top of the tower, between April to October, for great views of the city.

The Cubic Houses are a curious and magnificent architectural wonder. 40 conventional houses were tilted 45 degrees to become the first cube-shaped houses in Holland. They were conceived and constructed by architect Piet Blom in the 1970. Dutch architects have great creativity and inspiration for something like this. The concept behind these houses is that he tries to create a forest by each cube representing an abstract tree; therefore the whole village becomes a forest.

Hotel New York is located in the former headquarters of the Holland America Line. The building with its two green towers plays an important role in Dutch marine history and it always had (and has) a special place in the hearts of the people of Rotterdam. From here (at the Wilhelmina Pier), thousands of emigrants left for North America, hoping for a better life. Nowadays institution for great sea food and views across the River Maas. Nostalgia is palpable everywhere, and it’s easy to imagine tearful family members waving goodbye to each other with their handkerchiefs.

The old district of Delfshaven with its lovely canals and many historical buildings along the harbor is one of the most popular spots in this big bustling city. Unlike much of Rotterdam it survived World War II largely unscathed.

Markthal is the first indoor market hall of the Netherlands. Known as the ‘Food Mecca of the Netherlands’, this culinary core is packed full of specialty producers, restaurants and cafés. The market hall’s massive ceiling is painted with the world’s largest work of art, a colourful mural by Dutch artist Arno Coenen. Besides a shopping space it also houses 228 apartments and a parking garage for over a thousand cars.

The Meent, known for its upscale clothing shops and restaurants, is one of the most attractive shopping streets in the heart of Rotterdam. Meent has evolved over the years to become one of the favorite meeting places. Hotspots on the Meent include: Dudok, Napoli Restaurant, Café Pol, SuperTrash, Zola, Shoe Club, Ventidue (ladies fashion) and the Van Gils Brand Store.

The Euromast, Netherland’s tallest lookout tower, was built in 1960 by architect H.A. Maaskant and contractor J.P. van Eesteren, to mark the occasion of Floriade, the international flower and garden exhibition. From the top, at height of 185 meters (606 ft), you can enjoy a fine-dining restaurant with dazzling views of the surrounding towns.

Rotterdam Royal Zoo, also known as Diergaarde Blijdorp Zoo, was established in 1857 making it one of the oldest zoos in the Netherlands. Every continent has it own area with their animals.

When you think of the Netherlands, you probably conjure up windmill images. Historically they were a vital part of the water management system designed to prevent flooding in this low-lying land. Come to village of Kinderdijk, just 23 km (14 miles) east of Rotterdam, to admire the spectacular sight of a network of 19 fully functioning windmills on the polders. They were built around 1740 and were awarded UNESCO World Heritage site status in 1997. Today you can see them in operation during the summer months. If you’re visiting in winter, bring your ice skates and join the skaters on the frozen canals. Source: expatica