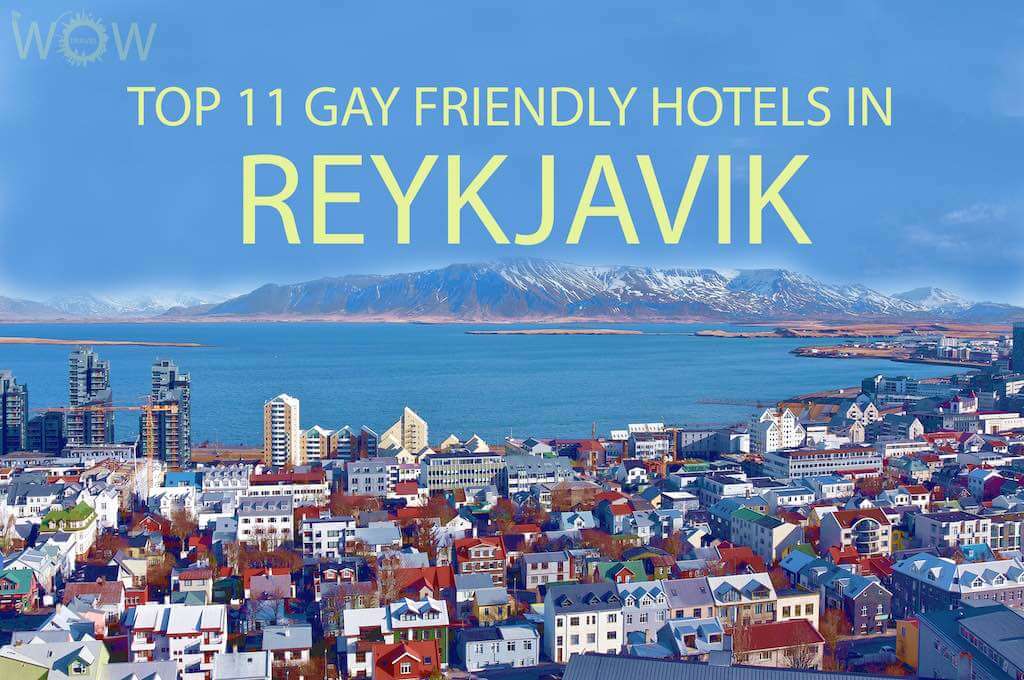 Reykjavik, the capital of Iceland, is a great place for a Scandinavian gay-cation. Here, LGBT+ people are not just tolerated, there’s plenty of gay friendly hotels in Reykjavik.  They’re welcomed and accepted with open arms. So, it’s no surprise that finding gay hotels in Reykjavik is really easy. Consequently, you can choose from a wide selection of LGBT-friendly places to suit all budgets. And there’s no need to stress about finding hotels near the gay area. This is because the whole of Reykjavik is practically one big gay neighborhood, especially during the annual Gay Pride Parade. But even on regular days, you and your partner can freely explore Reykjavik hand in hand. Later at night, you can dance with whomever you want in the queer and gay-friendly clubs. Such is the city’s open and live-and-let-live vibe.

Are you arriving from abroad? Then you’ll most likely fly in through Keflavík International Airport. It’s 50 km (31 miles) southwest of Reykjavik. From the airport, you can take a taxi to your hotel. Or, you might want to ride the  Flybus Airport Shuttle. This service provides a more affordable transportation option between the airport and most hotels in Reykjavik.

The Art Deco architectural style of Hotel Borg makes it an elegant city landmark. A sophisticated air flows throughout this 4-star property. You’ll find a chandelier-lit lobby, murals in the Italian restaurant, and soothing hues in the Borg Spa. Each of the hotel’s rooms and suites likewise has an Art Deco aesthetic. In addition, they’re equipped with modern amenities such as satellite TV, mini-bar, and heated bathroom floors.

Hotel Borg, a Keahotels property, is in downtown Reykjavik, Iceland. Beside it is the beautiful Austurvöllur Park, a popular spot for sunbathing in the summertime. Also, many of the city’s LGBT-friendly bars and clubs are within easy reach. Do you love religious architecture? Then you’ll be pleased to know that the Reykjavik Cathedral and the breathtaking Hallgrímskirkja Church are close by.

Planning a tranquil, romantic getaway in Iceland? The Alda Hotel has you covered. This 4-star property is located on Laugavegur Street’s quiet upper end. You’ll find plenty of romantic things to do in the hotel. For instance, soaking in the outdoor hot tub under the Northern Lights is a stellar experience. Similarly, intimate moments can be shared over a meal at the Brass Kitchen & Bar. However, for a truly exceptional date, go for a romantic helicopter flight over Reykjavik. Soaring over colorful rooftops and sipping on sparkling wine atop a mountain will result in lasting memories.

Alda’s luxurious amenities make it among the most popular gay hotels in Reykjavik Iceland. Each room features Egyptian-cotton sheets and blackout drapes for an excellent night’s sleep. Some rooms also have a private balcony or terrace. In addition to complimentary Wi-Fi, guests are provided with smartphones loaded with free data. Moreover, they can get some pampering with an in-room massage in this place, one of the most gay friendly hotels in Reykjavik.

Spanning three historic buildings, Hotel Reykjavik Centrum is linked to the city’s architectural and archaeological legacy. The property’s oldest section dates back to 1764. When the area underwent excavations, Iceland’s oldest human remains were discovered. Traces of a Viking longhouse were also unearthed. In a  similar vein, the interior is something of a throwback to olden times. You’ll find wooden floors, vintage wallpapers, and old photographs. However, modern amenities such as flat-screen TVs, mini-fridges, free Wi-Fi are in good supply. Want to grab a bite? You can get some excellent casual fare at the hotel’s Uppsalir bar-cafe.

Hotel Reykjavik Centrum is located on Adalstræti, one of the city’s oldest streets. It’s steps away from Austurvöllur Square, a popular gathering spot. Lake Tjornin and the harbor are within easy walking distance. Meanwhile, a 2-minute stroll will lead you to Pablo Discobar, a lively gay-friendly club.

If you’re looking for budget accommodation in Reykjavik, then check out Loft-HI Hostel. This 2-star property offers 18 guestrooms. They’re a mix of dorm-style quarters with shared bathrooms and double rooms with their own private bathrooms. You can whip up a meal and socialize with other guests in the communal kitchen. Or, join a yoga session or a table football competition—nice ways to make new friends here. Loft-HI Hostel is one of the popular gay hotels in Reykjavik Iceland. In fact, it’s home to a cozy bar that regularly hosts LGBT events such as drag shows. The rooftop terrace, offering nice views of the city, is a great place to hang out.

The hostel is centrally located in Reykjavik, a short walk from the Hallgrímskirkja Church. Want to try international food with an Icelandic twist? You can do so at the Hlemmur and Grandi food halls. Nearby, the gay-friendly Sundhöllin pool complex lures you with its hot tubs and saunas.

What are some of the signs that the Radisson Blu Saga Hotel is gay-friendly? For one thing, the warm and welcoming personnel start wearing rainbow sashes and garlands for Gay Pride. For another thing, its acclaimed Grillid restaurant is a gay-favorite venue in terms of fine dining. Finally, gay and straight guests alike love the spacious, elegant rooms. There are 235 of them, each with stunning views of glaciers and mountains. Also, all rooms also boast modern comforts such as satellite TV, high-speed Wi-Fi, and a rain shower or bathtub.

The Radisson Blu Saga Hotel is in the Vesturbær area in the city’s west end. Next to it is the University of Iceland while the National Museum is just across the street. Meanwhile, the Vesturbaejarlaug Swimming Pool Complex is just an 8-minute walk away.

As its name suggests, Center Hotel Plaza is located in the heart of Reykjavik. Next to it is Ingólfur Square, the city’s oldest square. If you visit in winter, you can shop at the square’s Christmas Market and twirl on the ice skating rink. Booking a room here during the annual Winter Pride Festival is also a good idea. This is because the rowdy Valentine’s Party at the Kiki Queer Bar and the popular Masquerade Ball at Iðnó are close by.

The Center Hotel Plaza is a mid-range property offering great value for money. Each of its 255 guestrooms boasts a mini-bar, satellite TV, and free Internet access. Guests can treat themselves to hot and cold dishes at the complimentary breakfast buffet. And when the day ends, they can relax with a pre-dinner cocktail at the Plaza Bar.

Operating under the Design Hotels International Umbrella, 101 Hotel is an art lover’s haven. Inside, you’ll find a gallery of local art. Similarly, the chic rooms and suites can be likened to minimalist artwork. However, modern amenities like underfloor heating, high-speed Wi-Fi, and satellite TV ensure a comfortable experience. Eating and drinking are likewise pleasant experiences in the hotel’s trendy restaurant and bar, making it one of the 11 Best Hotels In Reykjavik, Iceland.

The 101 Hotel is located downtown. It’s also one of the many gay friendly hotels in Reykjavik, Iceland. Nearby, Laugavegur Street offers a wealth of dining and shopping options. And if you visit during Pride Week, drop by the Miami Bar for a rainbow-themed cocktail. But, if beer is more your style, try this Food and Beer Walking Tour. Indeed, it’s a great way to taste local craft beer and traditional Icelandic food.

Icelandair Hotel Reykjavik Marina is a popular choice for LGBT travelers. It’s endorsed by the organizers of Reykjavik Pride. Also, if you’re seeking luxury accommodation, you’ll find plenty to appreciate at this 4-star hotel. The rooms and suites offer scenic views of the mountains, sea, or city. And when it comes to amenities, you won’t be disappointed. You can get a taste of Reykjavik’s cocktail culture at the Slippbarin restaurant, keep fit in the gym, or relax with a book in the hotel library.

This gay friendly hotel in Reykjavik is in the traditional, yet trendy, Vesturbær district. It’s close to Reykjavik Harbour, the starting point for whale-watching tours. A 6-minute walk will bring you to the Saga Museum where you can try out Viking costumes. In addition, the Vesturbæjarlaug swimming pools are just a 4-minute drive from the hotel.

The world-renowned Hilton hotel brand is a Platinum Global Partner of The International LGBTQ+ Travel Association. Hence, the Canopy By Hilton in Reykjavik is a popular choice among queer travelers. This 4-star hotel occupies buildings that used to house an arts hub, a music venue, and a furniture factory. The stylish rooms are painted in shades that evoke images of the ocean or volcanic rock. After a restful night of sleep, you can start the day with an artisanal breakfast buffet. Later, enjoy complimentary drinks and bites at the hotel’s bistro and bar.

The Canopy By Hilton sits right in the city center. Close by are public buildings such as the Offices of the Cabinet of Iceland and Reykjavik City Hall. Do you like classical music? Then you can enjoy an evening of opera at the Harpa Concert Hall, a 5-minute walk away. Meanwhile, fans of literature and history need only to cross the street to reach the Culture House. Inside this beautiful building, an architectural treasure, are some of Iceland’s most enduring literary legacies.

The 3-star City Center Hotel provides nice accommodation at reasonable prices. It boasts 30 rooms spread over six floors. You’ll find free Wi-Fi, satellite TV, and a private bathroom. Some of the rooms on the upper floors have balconies overlooking Parliament Square. If you like, you can squeeze in a workout in the hotel gym and enjoy free coffee at the reception.

City Center Hotel sits along Austurstraet, one of the city’s oldest streets. Nearby, Kiki Queer Bar and the gay-friendly Bravó bar promise a fun-filled night. Several Reykjavik attractions are also within walking distance. At the Volcano House, for instance, you can learn about the country’s volcanic systems. After that, head to the Aurora Reykjavik science museum to learn more about the Northern Lights. Reykjavik experiences some of the best Northern Light in Europe.

Gay-owned and gay-operated, it’s easy to see why Alfred’s Apartments is among the top gay hotels in Reykjavik Iceland. Certainly, it’s cheerful facade doesn’t hurt, either. Nor does the fact that it boasts spacious apartments. Each one has a full kitchen and a private bathroom. In addition, some units have open kitchens, bar chairs, and living rooms. Wi-Fi is free, and there’s a communal laundry room.

Laugavegur shopping street is just a few steps away from Alfred’s Apartments. If you visit during the Pride Festival, you’ll see the street adorned in rainbow colors. If quirky and weird things appeal to you, check out the Icelandic Phallological Museum. It’s home to a large collection of penises from land and sea mammals. However, if you’d like to see the local wildlife in their natural environment, then give this Classic Whale Watching Cruise a whirl. For three hours, you can watch whales, dolphins, porpoises, and birds in and above Faxaflói Bay.

Get Some Culture in Reykjavik:

While there aren’t exclusively gay saunas in Reykjavik, the swimming pools and saunas are gay-friendly. Feel free to cruise in the following spots to make a new friend. However, keep in mind that these are co-ed, public spaces. So, it’s best to be discreet.