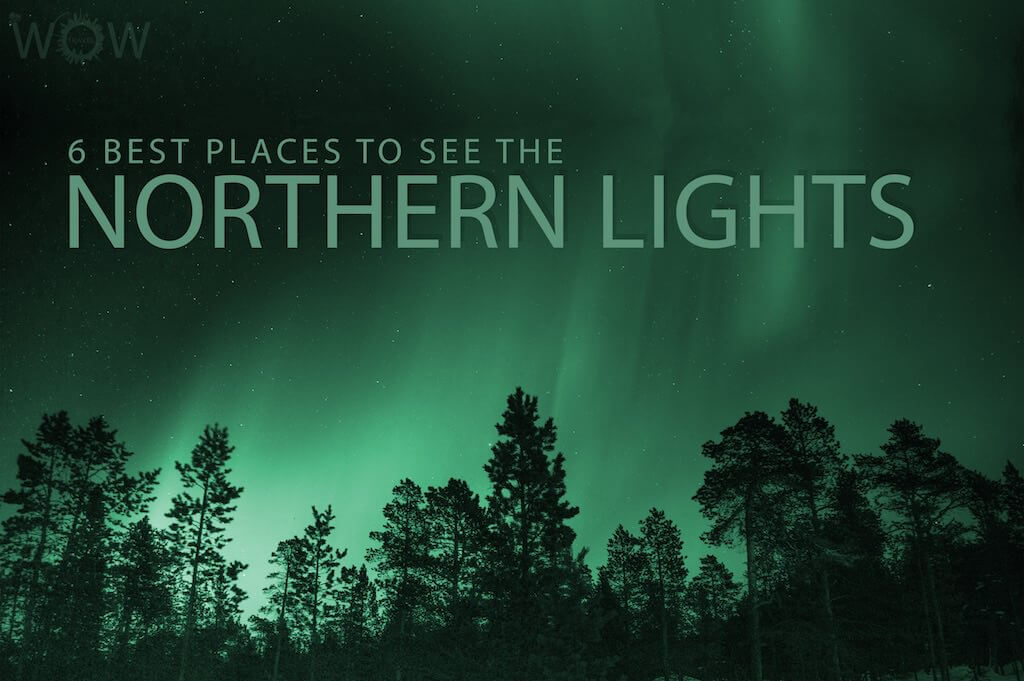 Northern lights, or the Aurora Borealis, are one of the world’s most dazzling natural phenomenons. It is said to be a truly fantastic experience and very awe inspiring. During the Aurora season many people visit areas including Alaska, Iceland and Norway for a holiday vacation, in the hope of catching this amazing natural wonder of the world. To make it easier, we collected for you the 6 Best Places To See The Northern Lights around the world.

So what is it exactly? Basically they are (usually) green lights that can be seen from places in the far north such as Iceland, Scandinavia, Alaska and northern parts of Canada. Because of their nature it looks like the lights are moving around the sky, dancing if you will, and it’s a pretty spectacular sight.

How it works? The Aurora Borealis form when charged particles emitted from the sun (solar wind) get caught up in the earth’s magnetic field and collide with atoms and molecules in our atmosphere. These collisions release little photons of light 80-480 km (50-300 miles) high in our ionosphere. The rays that you see are our magnetic field getting illuminated by the incoming energy. It’s like throwing dye in the sky.

You can stay in one of the 11 Best Hotels In Reykjavik, Iceland and hope for the best (a really intense aurora), or venture outside and increase your odds. A 30-minute drive from Reykjavík is usually far enough. The most popular watching area is the “Golden Circle”, a 306 km (190 mile) long route that allows you to visit some of Iceland’s most stunning sights, encompassing the Thingvellir National Park and the Haukadalur geothermic valley. Another great spot is the Snaefellsnes Peninsula, home to the famous Snaefellsjokull glacier. If you really want to go wild, the ultimate spot for viewing the lights is Drangsnes, a tiny fishing village in the western part of Iceland with less than 70 inhabitants. You can lay in the seaside hot tubs waiting for the auroras to show up.

The best and most accessible destination in Greenland to view the northern lights, is Kangerlussuaq, a settlement on its west coast. Kangerlussuaq has fascinating wildlife with chances of seeing musk ox, reindeers, arctic foxes, falcons, eagles and ravens, but most importantly it can boast of having more than 300 clear nights a year with some of the most powerful northern lights during the winter.

As the Northern territories of Canada extending up to the Arctic Circle the Canadians are also lucky to enjoy the breathtaking colors of Northern Lights. Head to the town of Whitehorse within the Yukon Territory. Whitehorse is a place seemingly on the brink of civilization and is a great base for venturing in to the night to marvel at the swirling light displays.

While you can potentially see them all over Alaska, the Interior and Far North regions are considered the best for northern lights viewing. But the most reliable spot is Fairbanks. Fairbanks is situated within a ring-shaped region around the North Pole called the auroral oval, this location provides a terrific balance of occurrence, frequency and activity. Fairbanks has long winter nights with light snow that make the perfect conditions. You can even take excursions several hours north from there with different operators.

Abisko is a national park in Swedish Lapland famous for its natural beauty and Nordic wildlife and regarded as one of the best locations in the world to observe the aurora borealis. The scientifically proven ‘blue hole’ – a patch of sky over the Torneträsk lake that usually remains clear despite overcast weather in surrounding areas – gives Abisko its own microclimate. This natural occurrence in the behavior of the prevailing winds in the area means that cloud rarely forms, creating ideal conditions for auroral appearances.

The Lofoten islands, Alta, Svalbard and Finnmark all have high rates of Lights sightings in Norway, but Tromsø remains the most popular destination. Located in the middle of the northern lights belt, Tromsø can offer some of the highest levels of northern lights activity on earth. Tromsø is situated among islands, breathtaking fjord landscapes and dramatic mountain peaks and it even hosts an annual Northern Lights Festival, a 9 day celebration that includes music, food, and entertainment.