13 Highest Bridges In The World 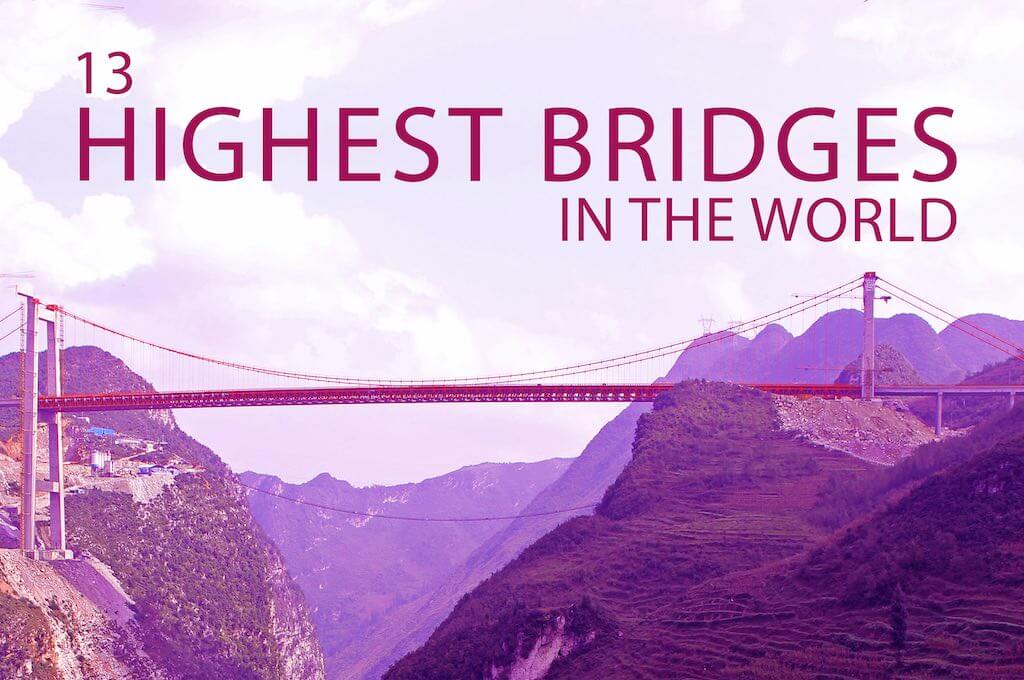 Since centuries ago, humans have built bridges for important purposes. Sometimes, bridge construction’s required to span a river or obstacle from one end to the other. In some circumstances, the bridge crosses over deep gorges. Naturally, some of them qualify as the highest bridges in the world.

Besides serving its purpose, these magnificent structures prove a treat to the eye. If you like visiting famous landmarks while traveling, do visit some of these bridges. The best way to explore them is to rent a car. That way, you can cruise across the bridge at your own pace. And, you can also stop before or after, to take amazing photos!

So, what are you waiting for? Let’s get to know these thirteen highest bridges in the world for inclusion in your next amazing itinerary.

Holding the records for the longest bridges, China also leads the highest-bridge race. Lishui River Bridge is one of them. It stands 330 meters (around 1,080 feet) from the ground. This height is the distance between the bridge and the surface of the river gorge.

Lishui River Bridge connects Yongshun County and Yongding District in Hunan, China. It’s also known as Lishuihe Bridge. The suspension bridge was first opened in 2013. There’s a rest stop and viewing area at the eastern end. So, make sure you take a quick stop for Instagram-worthy photos.

Another suspension bridge, it’s also found in China. Again, it’s yet another one in Hunan. Aizhai Bridge looks similar to the Lishui Bridge. But, this one’s slightly higher. It crosses the Dehang Grand Canyon, at a height of 336 meters (1,102 feet). Aizhai carried the Baotou-Maoming Expressway since 2012, the year it opened.

Unlike Lishui Bridge, you cannot just drive across this bridge. However, you can get on the expressway. Plus, you can easily view the bridge from some areas in Jishou. At night, over one thousand lights beautify this bridge. Even though they are meant to increase visibility, the lights make it an attractive sight.

As you can tell from its name, this bridge stands over the Liuchong River gorge. This gorge is located in Guizhou, China. And, the bridge connects Zhijin and Qianxi. If you visit one of these two regions, be sure to take a look at this bridge.

Opened in 2013, Licuhong River Bridge is a cable-stayed bridge. It stands 340 meters above the gorge (1,180 feet). To experience this bridge, you need to get on the Xiamen-Chengdu Expressway. And, as you’re getting close, make sure you have your camera ready!

Staying on the mainland of China ket look at the Dimuhe River Bridge. Located in Guizhou province, the bridge carries the Hangzhou-Ruili Expressway. It connects Liupanshui and Bijie.

Even though it is called the Dimuhe River Bridge, it actually crosses a reservoir leading to the Wu River. Technically, this suspension bridge stands at 360 meters But because it crosses the shallow part, the height recorded is only 340 meters (1,120 feet).

The Major Bridge Reconnaissance Design Institute designed this suspension bridge. In 2003, the year it opened, the Beipan River Bridge was the highest bridge in the world. It stands 366 meters high (1,201 feet). And, it sits beautifully above the gorge of Beipan River.

This bridge carries a highway from Xingyi to Guiyang. This means you can drive across the bridge to enjoy the view.

In Guizhou, China, the Baling River Bridge carries the Shanghai-Kunming Expressway. That means you have to get on a train to go over it. It stands 370 meters (1,210 feet) above the river valley.

In fact, the bridge was used for an international parachuting competition back in 2012. Take a look at some of the bravest base jumpers who competed. And keep an eye on the upcoming events!

At this point, we know that Guizhou, in China brings a lot of tours to visitors. The province is home to many of the highest bridges in the world. And, Liuguanghe Xiqian Bridge is one of them. It stands 375 meters high (1,230 feet). This height is measured from the river’s original level.

Since the construction of the Wujiangdu Dam, the water level rose. And this reduced the height to 300 meters only. But this fact does not make this bridge becomes less worthy of a visit! Get on the Xiqian Expressway to traverse it.

Now, we leave China for a while. This time, we visit Mexico. Crossing over the Baluarte River, this bridge first opened in 2013. Connection two municipalities in Sinaloa and Durango, the cable-stayed bridge stands 390 meters (1,280 feet) above the gorge. This is the third-highest bridge if it’s kind.

Before this bridge was built, it took around six hours to get to the Pacific coast from the Atlantic coast. Now, it only takes 2.5 hours. Plus, you get to enjoy the beautiful sights of its surrounding nature while driving over it.

Another bridge worthy of including on your China tours in Guizhou, the Yachi River Bridge connects Bijie and Guiyang. It carried the Guiyang-Qianxi Expressway since 2016. It crosses over the Yachi River. at 434 meters high (1,424 feet). But, technically, as it sits above the Dongfeng Dam, the reservoir water level is higher than the river. So, if you measure the bridge from the exact water level beneath it, it is only 306 meters high. Regardless, it is still one of the highest bridges in the world.

We’re still in China, but in a different province; Quijing. Puli Bridge stands 485 meters above the ground (1,591 feet). It connects Liupanshui and Xuanwei and carries the Hangzhou-Ruili Expressway. Before the bridge was opened in 2015, it took more than four hours to commute between the two areas. Travel time was reduced to just one hour.

Beneath the bridge, you can see a beautiful gorge on the Gexiang River and a small stream beside it. This alone should be a good enough reason to get on the expressway!

Over the Sidu River Valley, you won’t miss the yellow-painted bridge. It spans more than one kilometer long. And, it stands 496 meters (1,627 feet) above the valley. The beautiful design is the creation of CCHCC Second Highway Consultants Company. It took around 100 million USD to build.

The Sidu River Bridge carries the Shanghai-Chongqing Expressway. It crosses a beautiful belt in the mountains. And, its most distinctive design is the H-shaped towers.

Give a round of applause to China for the highest bridge in the world. Duge Bridge is also a part of the Hangzhou-Ruili Expressway. It stands 565 meters (1,854 feet) above the Beipan River. The bridge connects Guizhou to Yunnan and was completed in 2016. Thanks to Duge Bridge, it only takes one hour to get to Xuanwei from Shuicheng. Before, it could take up to five hours.

You can see the bridge’s towers soar on both ends. These towers are more than 800 feet high. And that puts them as some of the world’s tallest. They are definitely worth every picture for your Instagram posts.

Duge Bridge stands among many of its picture-worthy sisters in Guizhou, China. It is safe to say that this province is your main destination in China to see the highest bridges in the world. There, they have more very high bridges than the USA or anywhere in Europe.