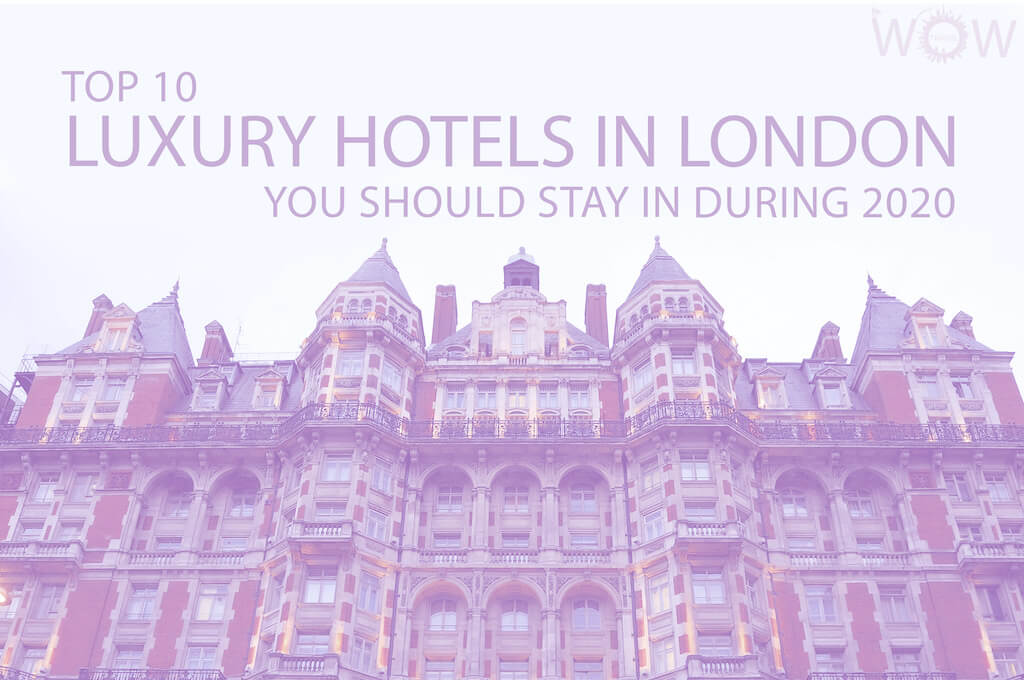 The English writer Samuel Johnson once said: “When a man is tired of London, he is tired of life; for there is in London all that life can afford.” And certainly, with its storied history and cultural diversity, it isn’t hard to love London. The British capital is home to some of the world’s best-known landmarks, from Big Ben and Buckingham Palace to the Tower of London and Royal Albert Hall. Finding the perfect home away from home plays a key part in having an unforgettable stay in this beautiful city. Choose a 5 stars hotel London has dozens of, and revel in the luxury of it all. So, let’s take a look at some of the most expensive hotels In London you should stay In 2020.

If the walls of The Savoy could talk, they could probably reveal wondrous stories about Claude Monet, Frank Sinatra, the Beatles, Oscar Wilde, Marilyn Monroe, and many other celebrity guests who have stayed here since it opened in 1889. Located in the heart of the West End district, this luxury hotel is just a few steps away from theaters, museums, and markets. The rooms feature Art Deco or English Edwardian designs yet come with all the modern amenities for a fantastic stay. Extraordinary cuisine by world-renowned chef Gordon Ramsay awaits at the Savoy Grill, as well as innovative cocktails at the award-winning American Bar. It’s a 5 stars hotel London has long been proud of.

A huge fire that damaged the roof of the Mandarin Oriental Hyde Park in 2018 didn’t harm its reputation as one of the top luxury hotels in London. In fact, from the moment you enter the grandiose marble lobby, you’ll witness for yourself the opulence that this 5-star hotel is known for. This venerable Edwardian building dates from the late 19th century and was a favorite haunt of Sir Winston Churchill. Today, you can choose from spacious suites with large bathrooms (where the toilets are heated much like those in hotels in Japan) and private terraces overlooking Hyde Park. And don’t forget to pamper yourself in the luxurious spa and delight in the offerings at the Michelin-starred Dinner restaurant. These experiences are what makes this a 5 stars hotel London is rightly boastful of.

As a catchy tune goes, The Ritz is where you should go to if you’re blue. The song also gets it right when it says this 5-star hotel is where fashion sits. From its opening in 1906, it has seen luminaries including royalty and Hollywood stars pass through its doors. Guests, too, can feel like royalty in lavishly decorated rooms and suites designed in the Louis XVI style. You can see if Lady Luck favors you at the Ritz Club casino or get an invigorating massage in the sophisticated spa. When evening falls, dress to the nines for a memorable dinner at the hotel’s Michelin-starred restaurant. Or have a cocktail at the elegant Rivoli Bar before heading out to paint the town red.

A bastion of London’s upper class, The Goring is about as luxurious as it gets. Did you know that Kate Middleton stayed the night here before she and Prince William got married? Guests can sleep here like kings and queens too, in sumptuous rooms tastefully decorated with fabric wallpaper and antique furniture. High-tech amenities like flat-screen TVs with films on-demand are standard as well. Expect the best of mouthwatering British cuisine in the Michelin-starred Dining Room restaurant. And at the cozy lounge bar, you can sip on a cocktail and bask in the warmth of an open fire. Located in the sophisticated Belgravia neighborhood, The Goring is within easy reach of the Victoria Palace Theatre, Buckingham Palace, Westminster Cathedral, and many other London landmarks.

Established in 1812 as Mivart’s Hotel, Claridge’s ranks in the top tier when it comes to the most expensive hotels in London. It’s long been associated with everything glamorous: from Art Deco architecture and decor to world-famous celebrity guests to spacious and lavishly appointed rooms and suites. Health buffs can work out in the state-of-the-art gym with the Mayfair skyline before them. It’s a great base for an exclusive walking-sightseeing tour of famous sites such as Westminster Abbey and Buckingham Palace. Afterward, get a pampering massage or a luxurious beauty treatment at the serene spa on the top floor. And when it comes to drinking and dining, Claridge’s award-winning restaurants and bars provide gustatory pleasure. It’s definitely among the best 5 stars hotel London has to offer.

Old-world elegance and impeccable service are the hallmarks of the Milestone Hotel Kensington. This boutique 5-star hotel is housed in Victorian townhouses and has been impressing visitors from near and far since the 1920s. Each of its rooms and suites combines period-inspired decor and modern features such as mini-bars, air-conditioning, and LED TVs. Guests can keep fit in the Health Club’s state-of-the-art gym and resistance pool, and enjoy fine international cuisine in the elegant Cheneston’s restaurant. Children and pets are treated to 5-star service too. The young ones are presented with a welcome gift upon checking in, while furry friends can enjoy pet beds and treats. Attractions such as Kensington Palace, the Royal Albert Hall, and the Royal College of Art are all less than a kilometer from the hotel.

Its low-key location in a residential area in Chelsea makes 11 Cadogan Gardens the luxury hotel of choice among those who value discreetness. The facade may exude understated elegance, but make no mistake, the interior reeks of opulence. Individually decorated rooms, some flamboyantly so, make for interesting quarters. Yet all are well-equipped with plush beds, and the bathrooms boast marble walls and floors. The elegant restaurant and bar provide the perfect setting for intimate meals, while the excellent concierge service will see to your every need. For shopaholics, 11 Cadogan Gardens is among London’s top 10 luxury hotels of 2020 because of its proximity to Ellis Street, home to some of the most expensive hotels in London.

A bright palette of colors in the rooms and public spaces of the Haymarket Hotel is no doubt responsible for its ever-cheery ambiance. Everything from the walls to the decor is a riot of vivid hues, thanks to designer Kit Kemp, who’s also the co-founder of the Firmdale Group, the hotel’s owner. Even the indoor pool looks mesmerizing, bathed as it is in mood lighting. Some of the suites boast their own kitchen and balcony, yet even the standard rooms are luxurious with marble bathrooms featuring tubs and double sinks. Of course, no upscale hotel would be complete without a fabulous restaurant. The Brumus Bar & Restaurant serves up modern European cuisine to please even the fussiest of diners. The Haymarket Hotel is a hit with a theater crowd, unsurprising since it’s just next door to the Haymarket Theatre Royal.

With its gorgeous red-brick facade and magnificent blue spires, St. Pancras Renaissance Hotel stands out as one of the most iconic luxury hotels of London. This palatial structure, a stellar example of the Gothic Revival style, adjoins St. Pancras International railway station. The accommodations are either in the Chambers section—which dates back to the Victorian period—or the modern Barlow extension. Lofty ceilings, large bathrooms, and warm, inviting lighting are characteristics of the hotel’s suites and rooms. Victorian design and architecture are also present in the Atrium lounge and the Booking Office Bar and Restaurant. If you’re craving a bit of pampering, the 24-hour St. Pancras Spa with its relaxation pool and traditional saunas just might be what you need.

The ineffably grand Kimpton Fitzroy deserves to be among London’s top 10 luxury hotels of 2020. Architect Charles Fitzroy Dell, finding inspiration in the 16th-century Chateau de Madrid in Paris, opened the Kimpton Fitzroy in 1900. Originally named the Russell Hotel, it was later called the Principal London. The suites here are huge, some with a four-poster bed and a bathtub by the window bay. The dining options are impressive, from the cozy coffeehouse to the atmospheric full-service restaurant to the posh bar. There’s a small fitness center on-site, and the hospitable staff goes the extra mile to make your stay as pleasant and comfortable as possible. These amenities and more make it a top 5 stars hotel London can boast about. Leafy green spaces such as Russell Square and Gordon Square sit close by, as well as other must-see spots such as the British Museum.