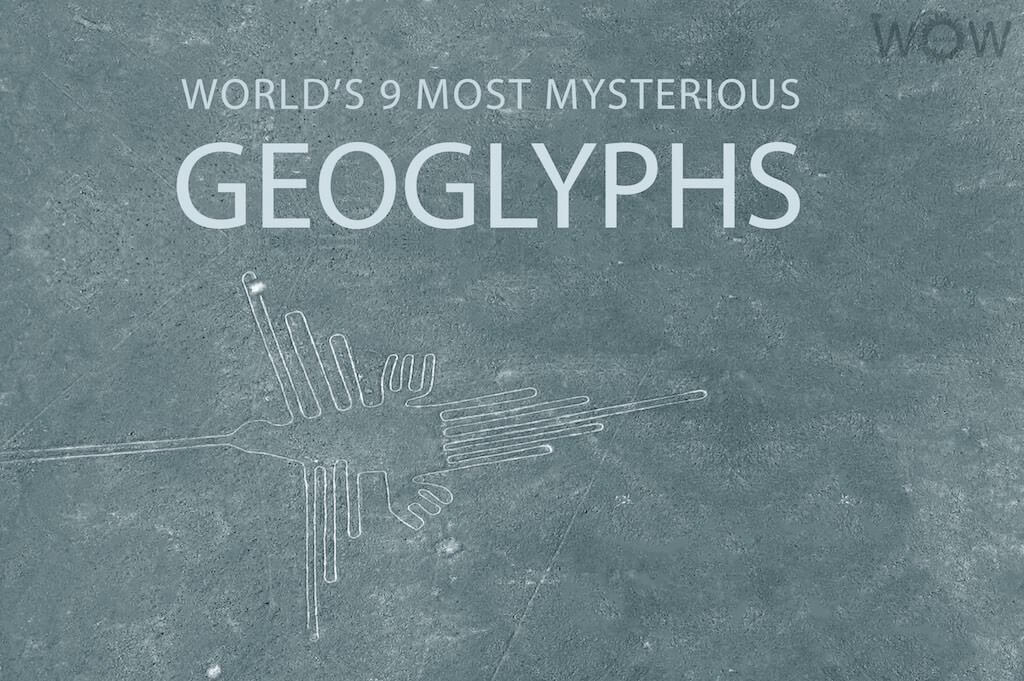 Geoglyphs are large artworks constructed by ancient civilizations on grounds which often can only be viewed from the air. Despite our best efforts, their actual purpose and the identity of their creators remain mysteries to this day. Listed below the World’s 9 Most Mysterious Geoglyphs.

In a remote part of the Oruro department, in the shadow of Bolivia’s highest peak, lies what may be the world’s largest work of art. The little known Sajama Lines are a network of thousands of near perfectly straight lines carved into the Earth as early as 3000 years ago by the indigenous population. The lines cover an area of 22,525 sq km (8,697 sq miles), fifteen times larger than the Nazca Lines, and total an astonishing 16,000 km (9.942 miles) in length. The web of lines are thought to have been used as footpaths in pilgrimages and between the shrines, burial towers and villages constructed at their intersections. The motivation for their construction is not understood, however. Source: bolivianlife

Archaeologists are calling them the Nazca Lines of Kazakhstan – more than 50 geoglyphs with various shapes and sizes, have been discovered across northern Kazakhstan in Central Asia in 2014. Some of the geoglyphs including a massive swastika, an ancient symbol that has been in use for at least 12,000 years, so the geoglyphs were built by ancient people. By whom and for what purpose, remains a mystery.

The Atacama Giant (Spanish: Gigante de Atacama) is a large anthropomorphic geoglyph in the Atacama Desert, Chile. Located at “Cerro Unitas”, this is the largest prehistoric anthropomorphic figure in the world with a height of 86 meters and represents a deity for the local inhabitants from 1000 to 1400 AD. Source: thelivingmoon

Cerne Abbas Giant is and ancient geoglyph cut into the hillside above the village of Cerne Abbas near Dorchester in Dorset. The figure is over 55 meters (180 ft) high and his ‘virility’ is very obvious! During Roman times he was identified as Hercules and associated with a fertility cult, or Priapus Worship, revived by Emperor Commodus in the late 2nd century AD. Source: historic-uk

The glyph measures 181 meters (595 ft) tall and is etched on a large hill overlooking the Pacific Ocean. The Paracas Peninsula on which the glyph lies is completely desert (it lies at the very top end of the Atacama Desert within the Paracas National Reserve. The glyph is carved not into rock but rather hardened sand, which was dug out in trenches about 61 cm (2 ft) deep. Carbon dating of artefacts found near the glyph date the candelabra to around 200 BC. What the glyph symbolizes is not known for certain; local guides suggest it could be a depiction of a cactus or the Southern Cross constellation; others postulate it to be a landmark made by early sailors representing the lightning rod of the Andean creator god Viracocha. Source: basementgeographer

The White Horse of Uffington, with its elegant lines of white chalk bedrock, is thought to be the oldest hill figure in Britain. The image is a stylized representation of a horse (some would say dragon) some 114 meters (374 ft) in length, and is thought to date back as far as 1000 BC in the late Bronze Age. Similar images have been found depicted on coins from that period, and it is thought that the figure represents a horse goddess connected with the local Belgae tribe. The goddess is generally believed to be one form of Epona, worshiped throughout the Celtic world. Source: mysteriousbritain

Stretching from Syria to Saudi Arabia, thousands of ancient geoglyphs built from stone stretch across the desert plains. Known as the “works of old men”, some display a kite-like structure while others have wheel-like designs. Similar to the Nazca Lines of Peru, they come in a wide variety of shapes and sizes, with much diversity between structures. The geoglyphs are virtually invisible to those on the ground, but can be easily discerned by those flying overhead. The local Bedouins refer to them as the “works of old men” but have been unable to provide further insights into their creators. Source: ancient-origins.net

Charter pilot Trec Smith was flying over South Australia toward the opal mining town of Coober Pedy in June 1998 when he saw it: a 4.2 km (2.6 miles) tall naked indigenous man, his left arm raised and ready to launch a hunting stick toward unseen prey. The Marree Man is located roughly 16 km (10 miles) south of Lake Eyre South in the South Australian Outback. Unfortunately the carving has faded recently and not a single witness can attest to the creation of the world’s largest geoglyph.

The Nazca Lines, mysterious geoglyphs that span a vast swath of the rugged Peruvian desert, (some 400 km / 250 miles south of Lima) remain an engima. No one has proof as to who built them and what their function was. Since their discovery, the they have inspired fantastic explanations from ancient gods, a landing strip for returning aliens, a celestial calendar created by the ancient Nazca civilization — putting the creation of the lines between 200 BC and 600 AD, used for rituals probably related to astronomy, to confirm the ayllus or clans who made up the population and to determine through ritual their economic functions held up by reciprocity and redistribution, or a map of underground water supplies. Source: crystalinks