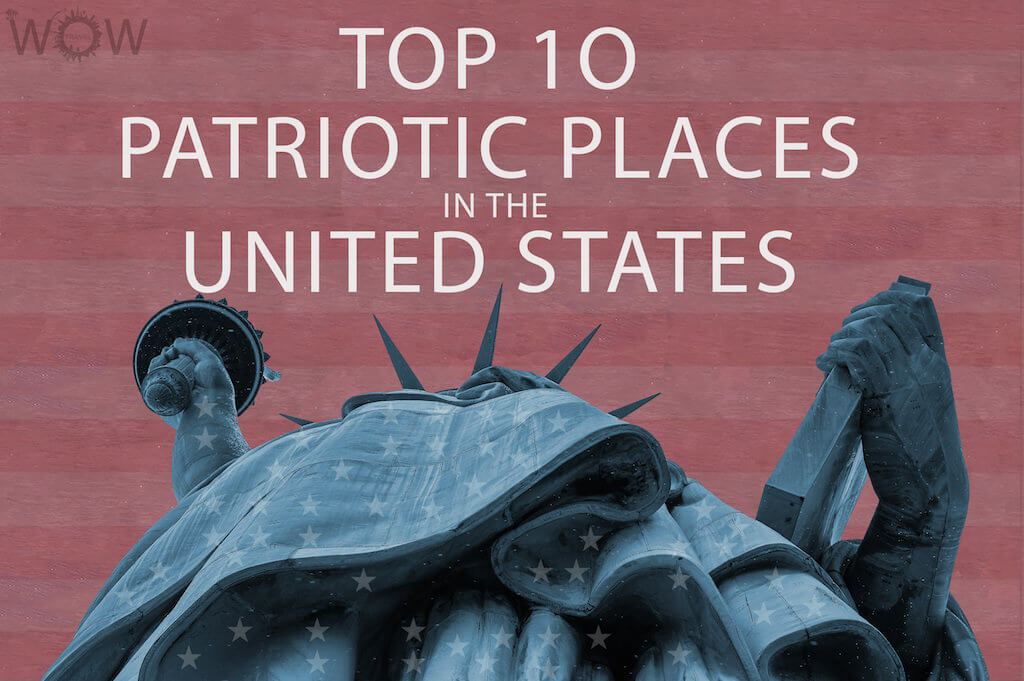 Any American will tell you that the United States is a patriotic country, and visiting the US while they celebrate the American Independence Day on Fourth of July is an outstanding experience where fireworks, barbecues and parades are everywhere. If you are in the mood for a patriotic vacation, we put together this list of the Top 10 Patriotic Places In The United States.

The White House is the official residence and principal workplace of the President of the United States, located at 1600 Pennsylvania Avenue NW in Washington, D.C.. For two hundred years, the White House has stood as a symbol of the Presidency, the United States government, and the American people. At various times in history, the White House has been known as the “President’s Palace,” the “President’s House,” and the “Executive Mansion.” President Theodore Roosevelt officially gave the White House its current name in 1901. There are 132 rooms, 32 bathrooms, and 6 levels to accommodate all the people who live in, work in, and visit the White House. There are also 412 doors, 147 windows, 28 fireplaces, 7 staircases, and 3 elevators. Planning to visit DC? Stay at one of the 11 Best Hotels in Washington DC!

Williamsburg was the thriving capital of Virginia when the dream of American freedom and independence was taking shape and the colony was a rich and powerful land stretching west to the Mississippi River and north to the Great Lakes. For 81 formative years, from 1699 to 1780, Williamsburg was the political, cultural, and educational center of what was then the largest, most populous, and most influential of the American colonies. It was here that the fundamental concepts of USA: responsible leadership, a sense of public service, self-government, and individual liberty were nurtured under the leadership of patriots such as George Washington, Thomas Jefferson, George Mason, and Peyton Randolph. The Independence Day Celebration here is one of the area’s biggest yearly events. Enjoy dramatic reading of the Declaration of Independence and concert by Virginia Symphony Orchestra as the sun sets. Source: history.org

Sits atop Capitol Hill, at the eastern end of the National Mall. The United States Capitol is among the most symbolically important and architecturally impressive buildings in the nation. It has housed the meeting chambers of the House of Representatives and the Senate for two centuries. The dome of the Capitol building was not added until the 1850’s. It took a total of 11 years to put the dome on top of the building. The U.S. Capitol has its own subway since 1909 and carries politicians from House and Senate office buildings to the Capitol. This base of the legislative branch includes 100 Senators (two from each state) and 435 members of the House of Representatives (based on the population in each state). The Senate meets in the north wing of the Capitol, and the House of Representatives meets in the south wing.

The fields that surround the small town of Gettysburg are vast in their landscape and stories. But it is the huge Civil War military park, dedicated to the soldiers who fought here, that so many come to visit. The Battle of Gettysburg was a turning point in the Civil War, the Union victory that ended General Robert E. Lee’s second and most ambitious invasion of the North. Often referred to as the “High Water Mark of the Rebellion”, Gettysburg was the Civil War’s bloodiest battle and was also the inspiration for President Abraham Lincoln’s immortal “Gettysburg Address”.

The Freedom Trail is a 4.5 km (3 mile) red-painted and bricked path connects 16 principal historic monuments and sites. starts at Boston Common and winds though the streets of Boston. along the way you will see a unique collection of museums, churches, meeting houses, burying grounds, parks, a ship, and historic markers that tell the story of the American Revolution and beyond. Be sure to pit stop for a “beah” at America’s oldest bar, the Bell in Hand Tavern.

Mount Rushmore National Memorial is a large-scale mountain sculpture by artist Gutzon Borglum. The figures of America’s most prominent U.S. presidents: George Washington, Thomas Jefferson, Abraham Lincoln and Theodore Roosevelt are carved from a granite mountainside high above the treetops of the Black Hills. Carving took 14 years to complete and cost $1 million, yet this Shrine to Democracy is priceless to Americans.

Also known as Lady Liberty, this colossal sculpture historically is located in New York Harbor. It was a gift from France to the United States in 1886, and it is probably one of the best-­known statues in the world. The Statue of Liberty stands as a reminder of its role as the first face to greet immigrants coming to America to seek a better life.