Top 10 Things To Do In Baltimore 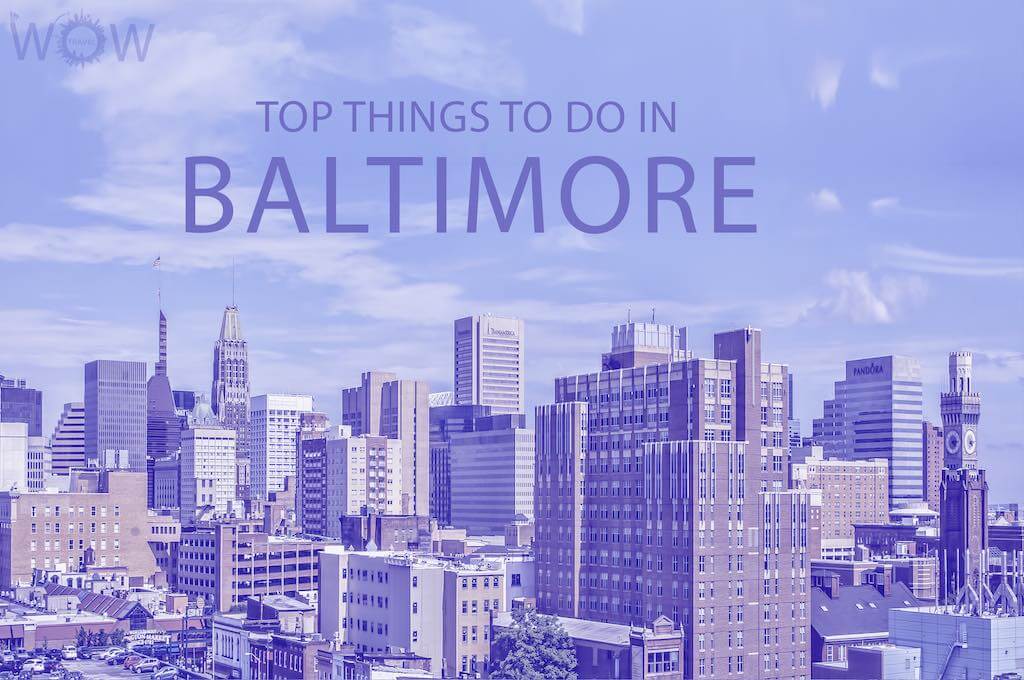 The largest city in the state of Maryland. Baltimore is one of the most popular cities in the U.S. A hugely popular destination with a huge number of things to do. Highlights include museums, historic landmarks, shopping, and dining. A lot of the tourism centers around the Inner Harbor. Despite this, Baltimore is much more than that. It offers unique neighborhoods such as Hampden and different incredible attractions such as the National Aquarium. Known for its Inner Harbor and its steamed crabs, it has a lot more to offer. Baltimore is home to trendy restaurants and hotels. Its different festivals have earned Baltimore the reputation as the coolest city on the East Coast. Read this list of the top 10 things to do in Baltimore, and you’ll see why the city has been nicknamed Charm City.
[booking_product_helper shortname=”baltimore”]

The Avenue in Hampden

Hampden is one of the hippest areas in Baltimore. The main road has a range of cafes, restaurants and independent stores. No chains, just local Baltimore businesses. The neighborhood is known for its quirkiness. It has featured in many of John Waters’ films. It is also known for its yearly festivals. The Miracle on 34 St. festival is a popular festival every December. If you’re looking for a great place to eat and drink, Hampden is home to the city’s best bars and restaurants. Some of the places you’ll want to check out include Avenue Kitchen & Bar and Bluebird Cocktail.

There is nothing more American than going to a baseball game. Baseball fans can watch the Baltimore Orioles play Major League games at their stadium. Oriole Park is at Camden Yards. Once a railroad center, it is now home to Baseball. The stadium is only two blocks away from the birthplace of the famous player, George Herman “Babe” Ruth. A state of the art stadium that is also very traditional in its design. Oriole Park is just West of the Inner Harbor. Any visitor to a game will soon see how popular the Baltimore Orioles are.

Fell’s Point is a fantastic and historic waterfront area. It is one of the most interesting parts to visit. Fell’s Point is a unique destination on the top 10 things to do in Baltimore. Populated with 18th and 19th century period homes and storefronts. Visiting Fell’s Point is a little like stepping back in time. Just a short 15-minute walk from the Inner Harbor. Visitors can walk streets with names such as Fleet and Shakespeare. A great place for shopping and eating. It has a huge range of dining choices from upscale fine dining to local bars. For a great meal, you must try the Chesapeake Bay seafood.

The Lexington Market has been running for 236 years. A huge space, it is home to over 100 sellers. You can find every kind of food, from fried chicken to seafood. Baltimore’s most popular food producers are in Lexington Market. There is something for every kind of taste. You can try crab cakes at Faidley’s Seafood, waffles at Connie’s Chicken & Waffles or peanut brittle at Konstant’s Candy.

Sagamore Spirit is a whiskey distillery that offers interactive exhibits and tours. It gives you a great chance to explore the history of Maryland’s whiskey production. This huge waterfront building will take you through the entire process of how whiskey is made. Highlighting the fermenters, bottling process and the enormous 40-foot tall mirrored whiskey still. This complex hosts concerts and other events and is home to a restaurant from famed restaurateur Andrew Carmellini. Once you’ve had your tour of the distillery, you can enjoy some whiskey cocktails on a sunset tour with the Baltimore Water Taxi.

Any art lover needs to make sure they visit the Baltimore Museum of Art. The collection inside covers hundreds of years of artwork. Everything from ancient to modern. The Museum is also home to the world’s largest collection of art by the famed French painter Matisse. The building, with its six columns on the front, is a work of art itself. The sculpture garden, a fantastic little space, sometimes hosts jazz concerts.

The inspiration for the American National Anthem, Fort McHenry is a must-visit spot in Baltimore. The building is in the shape of a five-pointed star and defended the city during the Battle of Baltimore. Soldiers at Fort McHenry defended Baltimore from British attack. It was this moment that gave Francis Scott Key the inspiration to write “Star-Spangled Banner”. Fort McHenry is now a National Monument and is open all year round. If you visit this great place, you can have a guided tour, or take your time walking around the monument. Fort McHenry’s rich history means that it is the site for different events such as The Star-Spangled Banner Weekend.

Mount Vernon Place is the central plaza of Baltimore’s cultural center. It is home to several parks and the Washington Monument. If you climb the 227 marble steps, you have the chance to enjoy the fantastic view of the neighborhood. There are different homes built in different styles, such as Greek and Italian. The square is the perfect starting point to explore Mount Vernon. You can marvel at the buildings on display, such as the Walters Art Museum and George Peabody Library.

We’ve saved the best to last on our list of top 10 things to do in Baltimore. The Inner Harbor, the heart and soul of Baltimore. Thanks to Baltimore’s Inner Harbor, the city was a leader in industries such as canning and steel for over 200 years. Now, the Inner Harbor is a vibrant and bustling tourist destination. Home to the large retail center Harborplace and the National Aquarium. There is something for everyone at Inner Harbor. Visitors can learn more about Baltimore, by visiting one of the historic ships. If you’re after a tour of the sights, there are many sea tours available. To wrap the day up, visit one of the many restaurants based at Inner Harbor. Then, cap your day by relaxing at one of the best hotel pools in Baltimore!