Top 10 Things To Do In Belize 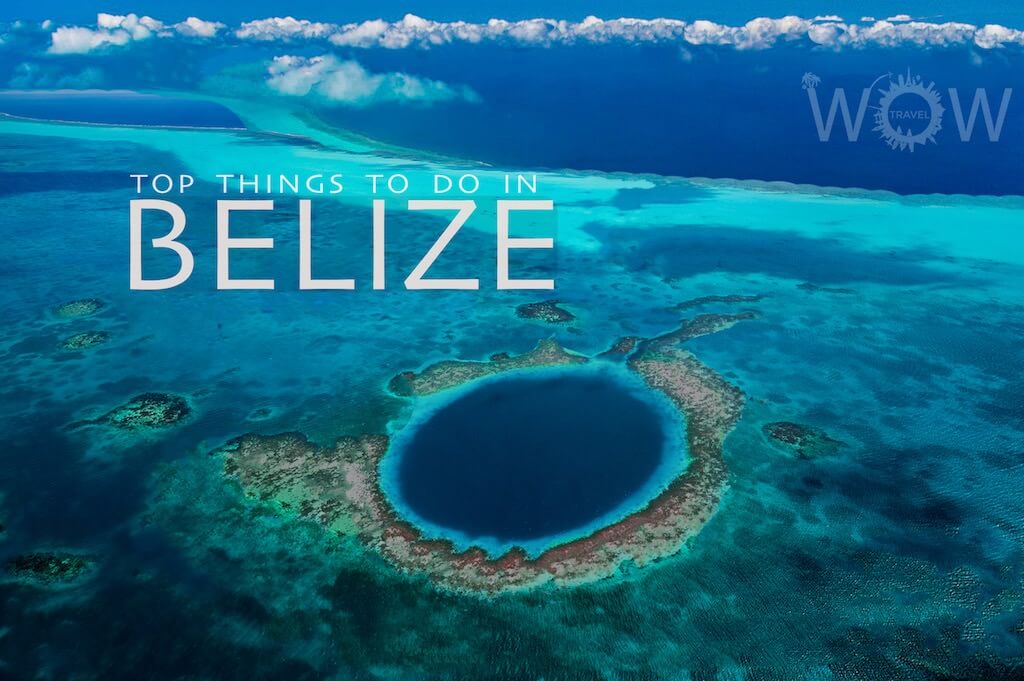 Located in the heart of Central America, Belize truly has it all covered for an unforgettable vacation; tropical beaches with turquoise water, jungles, mountains, coral reefs, cave formations, exotic wildlife and a fascinating mix of culture and people in a laid back Caribbean atmosphere. Come and experience nature at its finest. Dive with whale sharks, explore the ancient Mayan ruins and travel to some of the most extensive cave systems in the world. Enjoy our list of Top 10 Things To Do In Belize.

While there are many Mayan ruins across Belize, one of the most impressive archeological sites is at Xunantunich, located across the river from the village of San Jose Succotz in Western Belize. The core of Xunantunich occupies about 2.6 km² (1 square mile), consisting of a series of six plazas surrounded by more than 26 temples and palaces. One of its structures, the pyramid known as “El Castillo,” the second tallest structure in Belize (after the temple at Caracol), at some 40 meter (130 ft)) tall. This site is less than 1.5 km (1 mile) from some lovely rapids of the Mopan River and provides an impressive view of the entire river valley.

Located in the heart of the Belizean Rain forest, Actun Tunichil Muknal is one of the most breathtaking caving experiences you will have in Belize. It requires hiking through the Belizean Rain forest, swimming, climbing and squeezing through tight spaces. This cave was a sacred place to the Mayan of Belize. Here you will be exposed to the individual remains sacrificed to the gods of the underworld, artifacts just the way they were left by the Mayas hundreds of years ago, and beautiful stalactites, stalagmites, hollow stone curtains and stone cathedrals. There are over 1400 documented artifacts – pottery shards, pots of many different sizes, water vessels, and many tools and weapons used by the Maya people in what is suspected to be a bloodletting center to appease the gods in times of strife.

Cave Tubing is perhaps the most popular attraction in Belize and a favorite of cruise ship passengers. yes, it is exactly what it sounds like. You sit on an inner tube and travel through miles and miles of underwater caves. on the way you will see spectacular cave systems, which the ancient Mayans regarded as a sacred underworld, stalactites, waterfalls, stalagmites formations, fire pits and more.

The Jaguar Preserve has one of the most extensive jungle hiking trails in the country. Plants are identified along the trails and animals are often seen. You could spend a year here and still not see all there is to see inside this awe inspiring global treasure. It was founded in 1990 as the first wilderness sanctuary for the jaguar. Nowadays, roughly 60 of Belize’s 700 jaguars are believed to live in the sanctuary.

Lamanai is one of the largest Mayan sites in Belize, expanding over a huge expanse on the Belize New River, the Lamanai Mayan Center holds over 800 structures deep in the Tropical Forest, but the ancient ruins are not completely uncovered yet and archaeological works are still in place. Lamanai (Submerged Crocodile in Mayan) was occupied as early as 1500bc, the small onsite museum where your Lamanai exploration begins once on the site holds precious artifacts spanning well over 2000 years of Mayan History.

The Great Blue Hole is a diver’s paradise. Located next to Lighthouse Reef, about 70 km (43 miles) off the coast of Belize, the Great Blue Hole is part of the Belize Barrier Reef Reserve System that was declared a UNESCO World Heritage Site in 1996. Originally the Blue Hole was a limestone cave that started to form about 150,000 years ago. Gradually the water level rose as the glacial period ended and the caves were flooded and its roof collapsed, thus forming this unique hole. Looking from above, the dark blue color of the hole signifies that it has great depth, especially compared to the shallow waters nearby. Its deepest point lies at 124 meters. The hole has an almost perfect circular shape and it is 300 meters (984 ft) wide.

Located 1.6 km (1 mile) west of Belize Barrier Reef, Caye Caulker is a 0.8 km (0.5 miles) wide and 8 km (5 miles) long peaceful fishing village, part of a chain of islands forming the Belize Barrier Reef.  Caye Caulker has a relaxing atmosphere with white sand streets, golf carts for transportation, and casual dress with no shoes. There are no roads, no pollution, no loud noises. Just soft winds, light music and the endless sea. You can enjoy sailing, fishing, scuba diving and snorkeling, birding, jungle tours and windsurfing in the clear azure waters of the Caribbean. The northern and southern ends of the Caye are sparsely populated so they’re natural sanctuaries for the 150 species of birds that inhabit the island.

Ambergris Caye is the largest island in Belize, and a main destination for travelers. This narrow strip of paradise surrounded by the azure Caribbean, is approximately 58 km (36 miles) long and was once a part of the Yucatan Peninsula. It is believed that the Mayans occupied the area over 1500 years ago and dug a narrow channel to separate Ambergris Caye from Mexico. The only urbanized area on the island is a town called San Pedro, known as a sun-and-fun destination, attracting scuba divers, fisherman and snowbirds. It has a compact mixture of best hotels in Belize, souvenir shops, restaurants and dive shops.

Placencia is a gorgeous emerald peninsula in southern Belize with 26 km (16 miles) of natural sandy beach, a virgin mangrove-fringed lagoon, a wilderness of coral-studded cayes, nearby jungle rivers, and pristine rainforest. Garifuna Creole and Mayan cultures, and ancient Mayan ruins make Placencia the ideal location for the adventure traveler. But if you are a real adventurer (and a diver or swimmer),  you may want to go and spot the ocean’s largest fish – a whale shark. Between March to June, a few days before and after the full moon, whale sharks come to the Gladden Split (about 45 minutes from land) to feed on snapper eggs. There are a few companies that provIde this tour, all available from Placencia.

Caracol is the largest Maya archaeological site in Belize, Central America. In AD 650, the urban area of Caracol had a radius of approximately 10 km (6.2 miles) around the site’s epicenter. It covered an area much larger than present-day Belize City (the largest metropolitan area in the country of Belize) and supported more than twice the modern city’s population. Urban Caracol maintained a population of over 140,000 people through the creation of an immense agricultural field system and through elaborate city planning. Caracol is noted not only for its size during the Maya Classic era (A.D. 250-950), but also for its prowess in war; this includes an AD 562 defeat of Tikal (Guatemala) and subsequent conquest of Naranjo (Guatemala) in AD 631.