Top 10 Things To Do In Cambridge 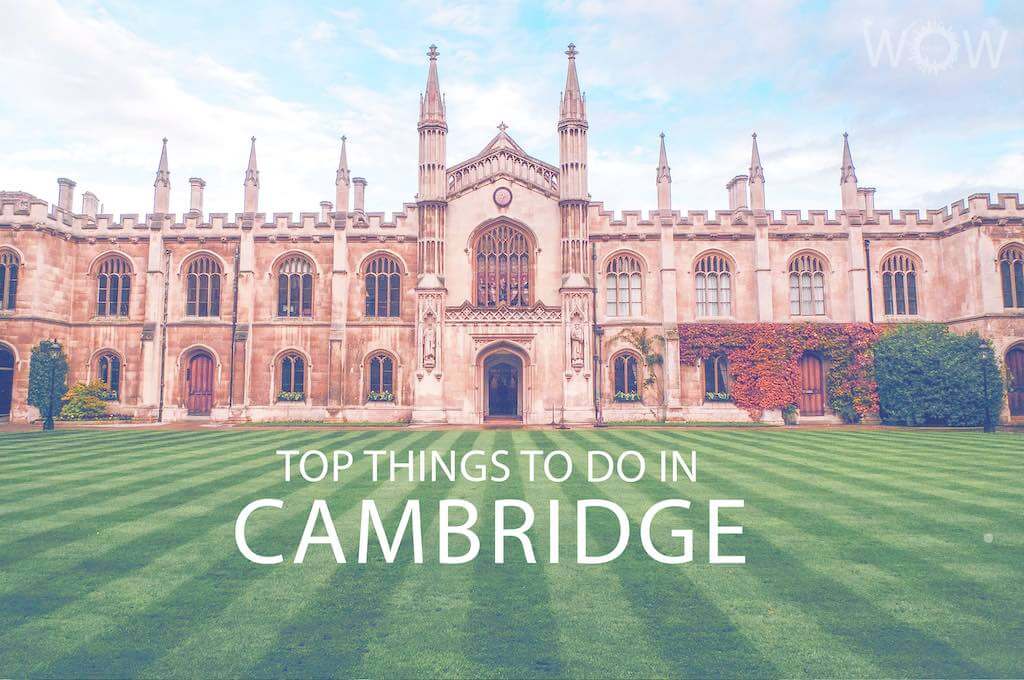 The two big ‘intellectual’ names in England are the university cities of Cambridge and Oxford. Like Oxford,  Cambridge is also an old city that dates back to the 13th century. However, what sets this city apart from its historic rival are the green spaces that surround it. In the midst of all this green is history exuding from the hallowed walls of the ancient colleges that have been the home of some of the greatest minds. Although the main appeal of the city lies in its historic university which you can explore at will, there is much more to the city than the medieval buildings. Read on for some of the top things to do in Cambridge.

The University of Cambridge

For most people, the main lure of Cambridge lies in the pursuit of higher education inside these hallowed halls. Cambridge city is host to over 30 colleges, the majority being famous as leading institutions in the academic world. The medieval-styled buildings housing the Cambridge University are a sight to behold, and a treasure trove of information. Some of the more notable colleges under the university umbrella are Trinity College, Christ’s College, and St. John’s College. The architecture and history of these colleges are quite astounding. An exclusive, private walking tour of Cambridge University will get you started on the right foot in learning about the city’s history and its unique culture.

Kettle’s Yard House is one of the several places to visit in Cambridge that will give you a deeper insight into the city’s history. Cottage rooms at the Yard House feature modern art and the original collection of the owners Jim and Helen Ede, the first owners of Kettle’s House. A former curator of the Tate Gallery in London, Jim combined three houses into one to create a cozy space to display his personal collection. Though currently under the ownership of Cambridge University, the House still offers the warmth you would expect from the original homeowners.

Located at the city center, Market Square has a history that dates back to the trade activities of the Middle Ages. At the market, sellers display and sell their wares in a tidy set-up, ready to offer you the best priced-items from Monday to Sunday. Market Square is open every day of the week and has everything you would want to buy in a market. Items ranging from foodstuffs, farm produce and phones are all available at Market Square. It’s a great place to pick up a souvenir. And if you book a room at the Hilton Cambridge City Centre, you don’t need to travel far to get to and from Market Square. It’s one of the 11 Best Hotels in Cambridge, offering all the comforts of home and then some.

Museum of Archaeology And Anthropology

The Museum of Archaeology and anthropology is best described as a time capsule, dating from the 13th century. It offers a great introduction to the history and development of Cambridge as a University City. Some of the beautiful artifacts stored in the Museum originate from Cambridge, while others are sourced from different parts of the world. During your visit, you will learn about different cultures of the world and how they weave into the Cambridge story. A curator on-site gives you a deeper understanding of the artifacts on display. Exploring the museum is one of the popular things to do in Cambridge.

Heading out in search of the best things to do in Cambridge will present you with the opportunity to explore the Backs. The series of parks and gardens that line the river are collectively referred to as the Backs.  It’s one of the best places to capture the essence that makes Cambridge so special. The riverside pathways offer a front-row view of the graceful buildings and student life. You can also go on a further exploration down the river in a 90-minute self-drive punt hire. Perhaps the most iconic sight from this location is the King’s College, which towers magnificently over the beautifully landscaped gardens. Two other notable attractions in the area are the Bridge of Sighs, which was built in 1831, and the quirky Mathematical Bridge from 1749.

Navigating the River Cam will give you the best views of the iconic Bridge of Sighs. Punts gliding beneath the bridge also have close contact with it and have splendid views of the beautifully designed structure. Since it is a private bridge, visitors can only view it from a distance. However, even from a distance, the bridge is quite spectacular and worth the picture. Taking pictures of the Bridge of Sighs, even from afar, is among the can’t-miss things to do in Cambridge.

The iconic Fitzwilliam Museum is the most famous museum in Cambridge. The grand neoclassical complex is a fitting structure for this fabulous museum. Prepare to be dazzled by some of the ancient treasures that are housed in the lower galleries, such as some splendid Egyptian sarcophagi and a delicate figurine of Bastet, the Egyptian cat goddess. The upper galleries showcase works of the great masters like Rubens, Da Vinci, and Titian. Rather tragically the designer of this masterpiece of architecture, George Basevi did not live long enough to see his completed work. He met with a tragic accident before the museum was completed.

This majestic country house lies 8.8 km northeast of Cambridge. While most of the 98-acre estate is owned by the National Trust, some parts remain with the Fairhaven family. The extensive landscaped gardens are a big attraction for visitors, and so is the old stately house with its numerous tapestries. For history and architecture enthusiasts, it’s one of the best answers to the question of what to do in Cambridge.

One of the most splendid buildings in Cambridge is the King’s College Chapel. This Gothic chapel, with its 12-bay perpendicular style interior, is definitely the show-stopper in a sea of great architecture. The lofty stained glass windows, the beautiful choir, and the stunning bat-wing organ are just a few of the striking features of this grand chapel. Also, this is the home of one of the most famous choirs in the world, the King’s College Choir. Another thing that makes it one of the popular places to visit in Cambridge: it’s associated with the legendary band Pink Floyd. You can learn more about how the city influenced the group’s music through the In the Footsteps of Pink Floyd Cambridge & London Tour.

The foundations of this grand church date back to 1010 but the church burnt to the ground in the 13th century. The church was rebuilt in the mid-14th century and a major expansion in the later centuries resulted in the present structure. The highlights of a visit to St. Mary’s Church are the stained-glass windows, seating galleries, and two organs. Getting a great view of the city from on high is one of the best things to do in Cambridge. And if you climb the church’s tower, you’ll get to do just that.