Top 11 Things To Do In Oxford 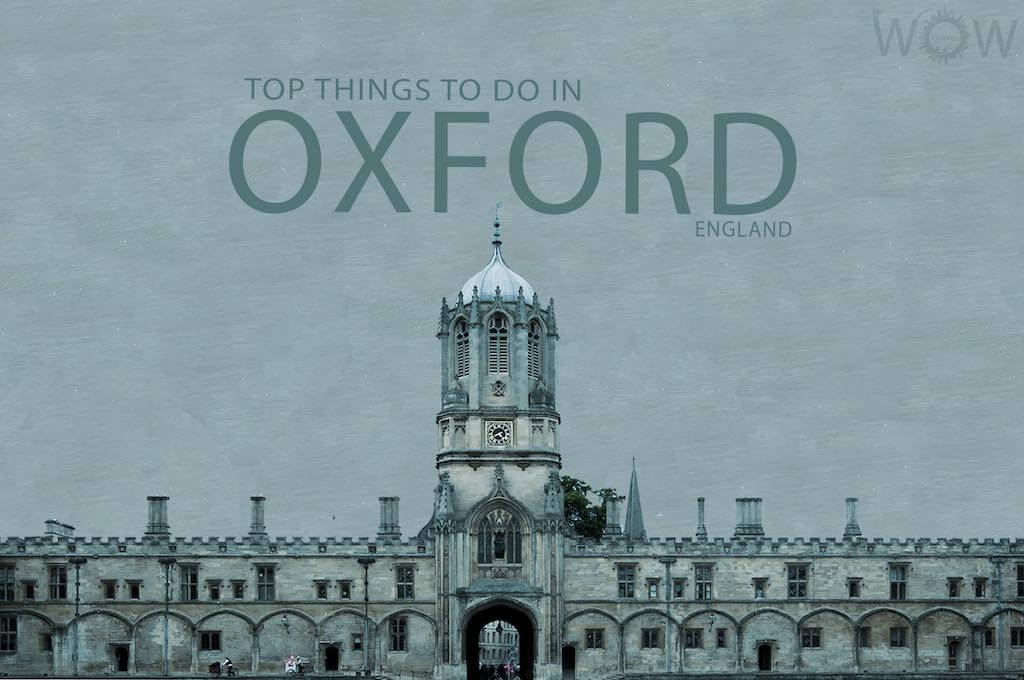 Home to the oldest University in Britain and the second oldest surviving university in the World (after the University of Bologna), the city of Oxford is an architectural marvel, and its many amazing buildings are the reasons why it is so famous. See the inspiration for Harry Potter’s Great Hall at Christ Church, view the city from Carfax Tower, visit the Bodleian Library and admire the Radcliffe Camera. Here are our picks for the Top 11 Things To Do In Oxford.

Founded in 1263 and situated in the heart of the city, Balliol College is one of the oldest colleges of Oxford University,

Climb the 124 steps to the 13th century tower of the University Church of St Mary the Virgin for the best view of the famous Oxford spires.

Once described as the greatest of all war memorials, the College of All Souls of the Faithful Departed was founded in 1437 by Henry Chichele, Archbishop of Canterbury + King Henry VI, and dedicated to those who had fallen in the Hundred Years War. The most prestigious of all the colleges, All Souls College admits only graduates of the highest academic distinction. Occasionally the magnificent Codrington Library is open to view, completed in 1756 on the proceeds of a sugar plantation in Barbados. Source: visitoxfordandoxfordshire

Originally established as ‘The King’s Hall and College of Brasenose’ for the study of sophistry, logic, philosophy and, above all, theology. The founders of Brasenose College were Sir Richard Sutton, a lawyer, and William Smyth, Bishop of Lincoln. The name of the College has always fascinated visitors to Oxford. There have been several interpretations of it, including the suggestion that it is derived from ‘brasen huis’ (brewhouse). The most likely explanation is that it refers to a ‘brazen’ (brass or bronze) door knocker in the shape of a nose.

The cobbled Radcliffe Square is Oxford’s most beautiful corner and the heart of the city, formed by a trio of great architectural gems: the medieval University Church of St Mary the Virgin, the 15th-century Bodleian Library and the Palladian-style Radcliffe Camera. The circular Radcliffe Camera building, built in 1737, was designed by James Gibbs in neo-classical style and is definitely one of Oxford’s most distinctive landmarks.

The Sheldonian Theatre was designed by Sir Christopher Wren and built between 1664 and 1669. It is used for music concerts, lectures and University ceremonies. Step inside and gaze up at the Theatre’s magnificent ceiling painted by Robert Streater during the reign of King Charles II. Finally, climb to the top and enjoy one of the best indoor 360 degree panoramic views of Oxford from the Cupola.

The surviving tower of the 14th century St Michael’s Church, that was demolished in 1900, is another great place to watch the city from above. The climb up the narrow winding staircase is worthwhile on a clear day and its only 99 steps giving you a view of the Oxford spires mounted against rollowing countryside.

Oxford’s 1,000-year-old castle and former prison were recently redeveloped to create one of the city’s busiest and liveliest quarters. Part of the old prison was transformed into the Malmaison Hotel and the remainder, plus the original castle, has reopened as a museum telling the story of the castle from 1071 until 1996, when the prison closed. Tours guided by “characters” from the prison’s history dressed in period costume really bring the story to life. Source: Telegraph

Blenheim Palace, located just Just 13 km (8 miles) north-west of Oxford, is a large country house, home to the 11th Duke of Marlborough and birthplace of Winston Churchill. It was built in the early 18th Century, in the rare English baroque style, to celebrate victory over the French in the War of the Spanish Succession. You will need a complete day to see the house and gardens properly, and explore the old town of Woodsock.

Visit the elegant and historic Covered Market, which runs between the top of the High Street and Market Street. There are shops selling everything from fresh fruit and vegetables, cheeses, meats and speciality foods, to clothes, jewelry, accessories and crafts. There are also several excellent cafes. Source: weeklyhome

Burford, one of England’s prettiest small medieval towns is a busy community of about 1,000 people. The town merchants were granted a charter to hold their own markets over 900 years ago, and the current business people, who have developed this site continue the long tradition of good service and the supply of excellent luxury and essential goods to both residents and visitors. With its long history of hospitality, beautiful Cotswold architecture, exclusive shops and galleries and one of the top twenty churches in the country. Burford is situated 32 km (20 miles) west of Oxford and it makes a perfect day trip. Source: burfordcotswolds