Top 10 Things To Do In Chiang Mai 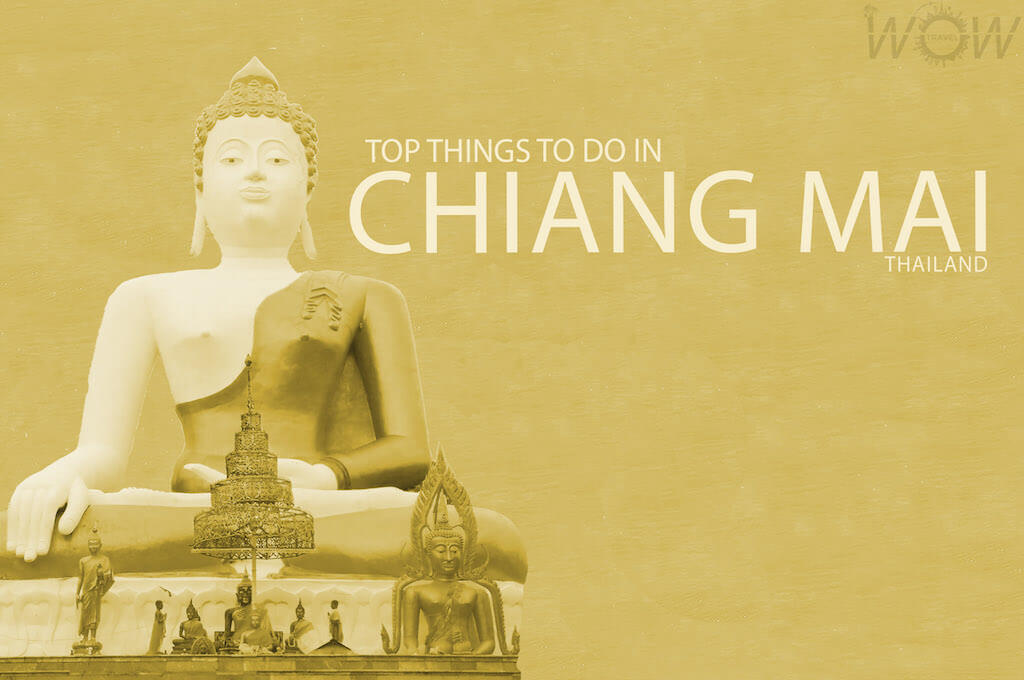 With over 120 magnificent temples, waterfalls and national parks, ancient ruins, fascinating markets, a legacy of 700 years of history and its own distinctive culture; Chiang Mai offers its five million annual tourists tons of awesome attractions. It is definitely one of the most authentic, magical and diverse cities in Southeast Asia and it is easy to feel like you have stepped far back in time. Get started with our list of the Top 10 Things To Do In Chiang Mai.

The Sticky Waterfall is an amazing day trip about an hour drive north of Chiang Mai’s Old City. It was incredibly fun, these waterfalls are not only impressive and gorgeous, but a special feature allows you to climb directly up the rocks into the oncoming cascading water!

Built sometime between 1385 and 1402, during the reign of King Saen Muang Ma, 7th ruler of the Mengrai dynasty, Wat Chedi Luang’s massive chedi (pagoda) is a distinctive feature of the Chiang Mai skyline. At its peak, the chedi measured 60 meters (196 ft) across at the square base and 80 meters (262 ft) tall and was once the home of the Emerald Buddha, Thailand’s most sacred religious relic. It now houses a replica, as the original resides in Bangkok. The temple was rebuilt in 1990 thanks to funds from UNESCO, and the building and grounds are extremely picturesque. Source: chiangmai.bangkok.com

Wat Bupparam is a Buddhist temple located at the heart of Chiang Mai, best recognized its Burmese-style chedi, and the beautiful, Lanna-style ordination hall made of woods with colorful mirror mosaic details built in 1819.

Wat Phra Sing was built in the 14th century by King Pha Yu of the Mengrai dynasty. It may have been the first monastery to house the Emerald Buddha, a cultural treasure that now resides at the royal palace in Bangkok. Wat Phra Sing currently houses Phra Chao Thong Tip, the most venerated Buddha statue in northern Thailand. Cast in 1477, it is made of an alloy of gold and copper.

Visit Chiang Dao Cave and explore Buddhist Shrines and limestone formations that are really spectacular. Chiang Dao Caves are situated approx 70 km (43 miles) north of Chiang Mai. The Chiang Dao Caves complex itself is supposed to consist of over 100 caves which extend for some 10-12 km (6-7 miles) inside the mountain range but there are only five main caves which are currently open to the public.

Spend a day with elephants in the Thai jungle near Chiang Mai. A visit is as educational as exciting as you will spend ample time bonding, doing health checks, feeding, and bathing the elephants. At the top-notch places you will spend your time working one-on-one with an elephant aided by a mahout. A mahout is a guy who basically dedicates their life to just one elephant, spending in upwards of 18 hours a day with them. Expect to get plenty of river time swimming with and washing your elephant pal. Our favorite two places are Patara Elephant Farm and Elephant Nature Park. Source: bigboytravel

Next to the well-known temple of Wat Chedi Luang is a small interesting temple called Wat Pan Tao, which means “to increase 1,000 times.” The temple was built around the same time as Wat Chedi Luang, in the late fourteenth century. It was one of four monastic temples serving the royal temple next door. The temple’s most interesting feature is its wooden wiharn, a chapel for lay people to pray in. The teak building was moved to the temple grounds in 1875 by King Inthawichayanon. It was formerly a royal residence, but the practice in Lanna was for each new king to built a new palace. The old palaces were often ‘recycled’ into other uses, especially in temples.

There are atleast seven markets in Chiang Mai. It’s a shopaholic’s paradise here. But you have to experience Warorot Market and the mile long Walking Street during Sunday afternoon til like midnight from Thapae Gate all the way to Phra Sing temple. Don’t miss the Night Bazaar, on Chang Klan Road, which offers northern handicrafts. You will be overwhelmed by the sheer variety, which is probably greater here than at any other market in Thailand.

the spectacular Buddhist temple that can be seen, from wherever you happen to be in the city, clinging to the mountainside near the summit of Doi Suthep. The temple is a major pilgrimage destinations during the important Buddhist holidays of Makha Buja and Visak.