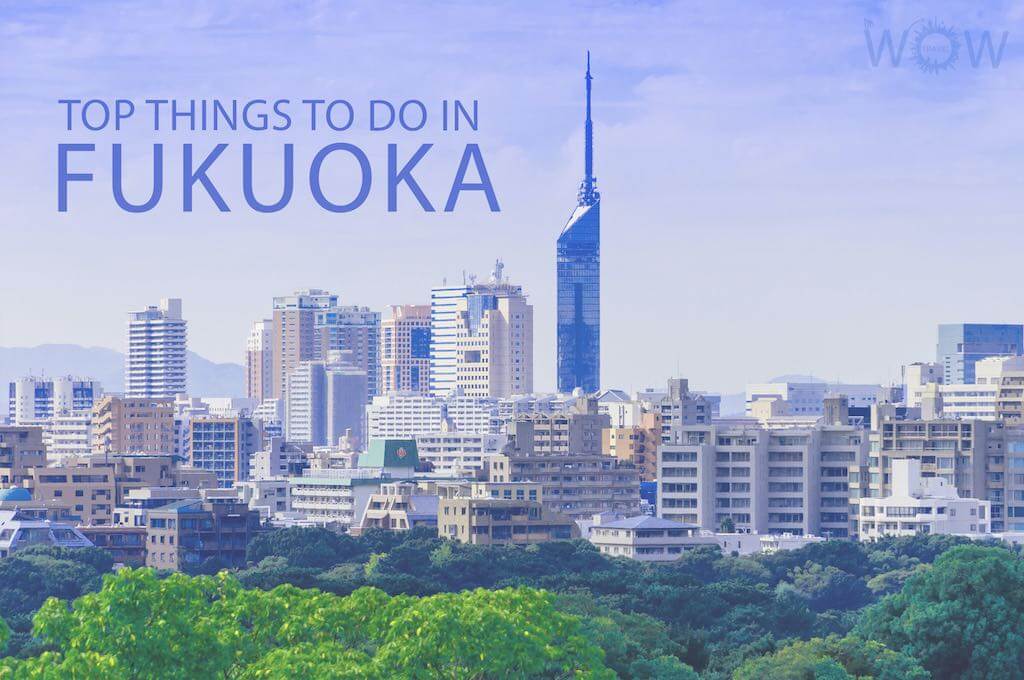 Are you looking for a getaway from the hustle and bustle of the city? Do you enjoy traditional and regional cuisine, events, attractions, and beaches? Then the harbor city of Fukuoka might just be the destination you’re seeking. Here, you’ll get to experience both old-school Japanese charm and the sights and sounds of an ever-growing city. From the iconic 400-year-old traditional ninyo (Hakata dolls) to many a modern and luxury Fukuoka hotel, the city is a seamless blend of the old and the new. Fukuoka is located only about 200 km (124 miles) from Busan, South Korea, and is a popular hotspot for Korean visitors and locals alike. It’s also easily accessible by state-of-the-art bullet trains, a journey made easier to and from elsewhere in Japan with the JR Full Rail System Pass. Now, let’s take a look at some of the best things to do in Fukuoka.

Held during the first half of the warmer July month, the Hakata Gion Yamakasa starts off early during the month and ends with a spectacular timed race throughout seven picturesque Fukuoka neighborhoods. It is, without a doubt, the best way to see all the small corners of the city on foot. Participating runners are treated to the bucolic sights of Fukuoka villages and landscape and accompanied by captivating floats along the 5km-long course. The elaborate floats can sometimes weigh tons, especially the kazariyama floats.

Sitting across the bay on a peninsula from Fukuoka’s main city center is Uminonakamichi Seaside Park, the prefecture’s biggest. With a near-five-star rating on most travel sites, the family-friendly park sizzles with a reel of events and happenings for people of all ages. You name it, they have it: playgrounds, family-friendly rides for the kids, a zoo with a petting area, and an open pool during summer. There are also well-maintained picnic spots, pathways for cyclers, and beautiful ponds surrounded by plants and flowers. It is the perfect Insta-worthy spot.

This spot of green was built during the mid-Edo period in the mid-1700s for the head of the Kuroda clan. It’s a quintessential attraction where you’ll find yourself ticking off your cultural checklist all day long. In fact, you could have lived in Japan for many years and still find yourself still surprised and mesmerized. It was intentionally built without the buzz of a thriving city and away from the crowd. Keep your camera handy and participate in the ice coffee and green tea traditional sweet demos held on the grounds.

This venerated site is one of the three leading shrines dedicated to Hachiman god. It’s also a commemoration to three ancient Japanese emperors and empresses: Emperor Oujin, Empress Jingu, and Tamayorihime-no-mikoto. Hakozaki Shrine is home to a large number of culturally-significant sites and also serves as a venue for various traditional events throughout the year. Take a slow stroll along its main hall, hall of worship, tower gate, and then end the trip with a long walk back to the Icho no Torii. Located a mere 5-minute walk from the Jakozaki Miyamae Station subway station, it is a must for those who are interested in the traditional fortune-telling wooden ball catching festivals. The autumn Hojoya Festival, where captured fishes are released into the fields, is also another crowd magnet.

The 234-meter origami-like triangular tower stands out in Fukuoka’s city center and its mirrored-glass is also quite a sight to behold too at night. Near the top is the observation deck, which offers awesome 360 degrees of unobstructed views rolling out towards the city outskirts. The tower is an epitome of Fukuoka’s modern aspirations and remains the tallest seaside observation tower in Japan. The impressive tower is surrounded by chic cafes, fine diners, quaint traditional restaurants, and sushi and noodle shops. Robosquare, in fact, is just a hop and skip away from the tower. Also nearby are hidden gems in neighborhoods that you can discover in a personalized Fukuoka tour.

Said to be the largest bronze statue in the world (possibly longer than the Statue of Liberty), the Nanzoin Temple and its Reclining Buddha is quite a sight to behold. A tourist magnet, it manages to draw millions of pilgrims and visitors every year and the number continues to grow. Although the 1995-built reclining Buddha takes the spotlight, visitors will get to enjoy a quiet, tranquil walk along a shady hillside trail near Sasaguri, a quaint traditional village after the trip to the temple. Be on the lookout for smaller but just-as-notable Buddha statues along the way because they’re just as Insta-worthy. You can easily spend half a day at this wonderful, serene attraction.

Although what remains of the original 47,000 square meters of grounds that it used to cover, the remains of Fukuoka Castle, a 17th-century hilltop residence, is worth checking out especially if you love history and culture. There’s only a small portion of former Maizuru Castle left today (parts of it has become a part of Maizuru Park) but it is famous for the thousands of cherry blossoms in April during the Fukuoka Castle Sakura Festival. And if you book a unit at the chic and modern Ten Apartment Hotel, you’ll be within walking distance of the castle grounds.

Located at the foot of the iconic Fukuoka Tower, Momochihama Beach is a 1km stretch of artificial beach that features restaurants, quaint retailers, a wedding hall, and a ferry port. Located at the center of Marizon, the sprawling beach also bridges the divide to Uminonakamichi Seaside Park, a popular tourist attraction right across the narrow peninsula of Hakata Bay. Connected to the mainland with a short ferry ride, it’s the place for swimming, sunbathing, and family-orientated sports such as soccer and beach volleyball. You’re actually just a hop and skip away from Uminonakamichi Seaside Park where there is a water park, zoo, wide-open spaces, lawns, and an amusement center.

If you’re trying to get away from the hustle and bustle of the city, the serene, quiet, and historic Atago Shrine will hit the mark. The fact that it is a little hard to find makes it more of a hidden gem! After the hard work of trekking your way up to the terrain, you’re rewarded with an unbeatable view of Fukuoka from the top of the hill. Atago Shrine itself is a very traditional shrine which many locals visit every year. This includes every New Year for its sunrise and cherry blossoms. Located atop Mount Atago, surrounded by beautiful, rolling greens and blessed with the clean water from the Muromi River, the trip to the shrine will be eye-opening, relaxing and when you’re done, sample Atago mochi and matcha at the attraction’s traditional tea house.

With servicing ferry and bus transportation from the Fukuoka itself, getting to the drop-off point at Nokohoshima is a delightful experience in itself. With 2 buses going to and fro per hour to the Hakata Bay location, the small, serene, and peaceful island which serves as home to less than a thousand locals is a convenient getaway destination. Every cent spent on the island goes towards sustaining the residents and the laid-back lifestyle shows you that a simplified life can be just as rewarding. Top activities in Nokohoshima are swimming, hiking, eating, and camping out under the mesmerizing star-filled sky of Japan.