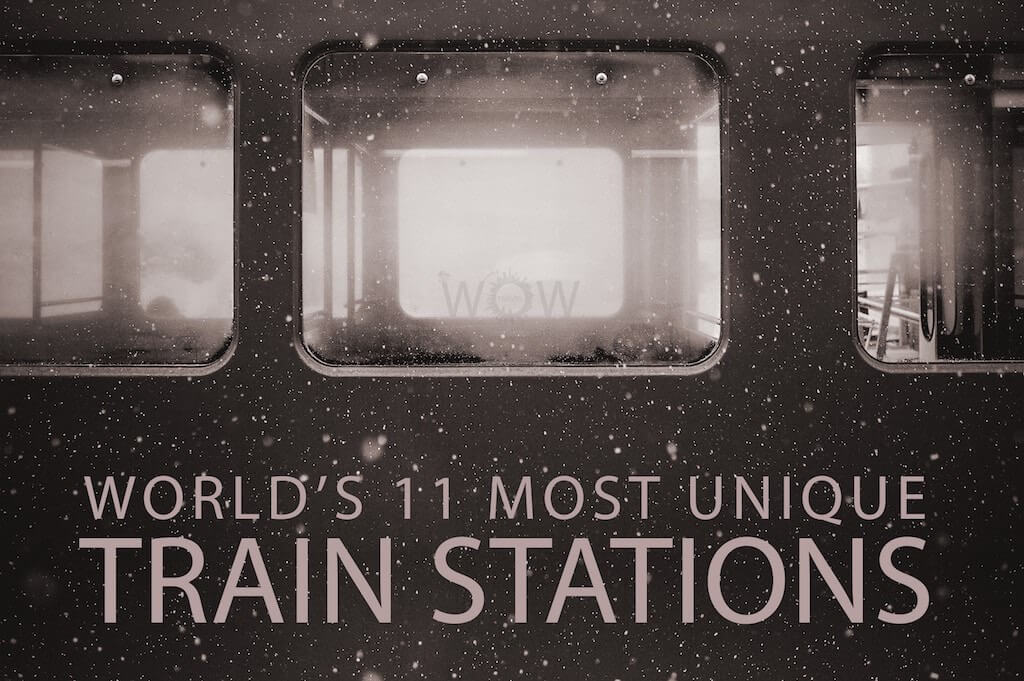 Train travel, which was considered a great innovation once upon a time, is still a very important mode of transport. It offers travelers a chance to sit back and relax as they ride through some of the world’s most incredible scenery. As train commuters, people often walk in and out of the stations at a fast pace without a glimpse of the walls or space around them. But, by doing so, one can miss the opportunity of looking at the beauty of these fine pieces of architecture. Next time you are dashing through a crowded train station to catch a train, take a moment to look up. Here comes the list of the World’s 11 Most Unique Train Stations.

Gare Liège-Guillemins is the main station of the city of Liège, in eastern Belgium. This modern station, with steel and glass vaulted roof, was designed by the famous Catalan architect Santiago Calatrava.

Opened in 1864, this majestic Beaux Arts complex in Paris’s 10th arrondissement is one of the oldest rail stations in the world, still one of the busiest, and perhaps the most magnificent. The building itself was designed by the architect Jacques Hittorf in 1861 in a modern neoclassical style with a majestic facade decorated with 23 statues by famous sculptors, each personifying a destination served by the rail line.

São Bento station was built in 1896 in the city of Porto on the northwest coast of Portugal, but the building (designed with a French Renaissance touch) was only officially inaugurated in 1916 where a convent once stood. Around 20,000 magnificent tiles cover most of the atrium, they are the work of artist Jorge Colaço.

Kanazawa Station is a major railway station in Kanazawa, Japan. There is a glass dome called “Motenashi (Welcome) Dome” which looks like a huge umbrella, at the east entrance of Kanazawa Station. Outside the Kanazawa Station has a wooden gate called “Tsuzumi-mon”, the design of which is based on traditional Japanese hand drums or tsuzumi. In recent years, the area has become a busier shopping quarter with the construction of large-sized shopping buildings.

Southern Cross Railway Station is the most important rail terminal in Victoria state, Australia. The design focus is the dune-like roof that covers an entire city block. The roof’s form plays a crucial role as part of the environmental envelope ensuring that it is symbol of sustainable architecture developed in response to the hot external climate and the internal need for diesel extraction and ambient cooling via natural ventilation.

Located in the heart of Mumbai, the Chhatrapati Shivaji Terminus is a 19th-century railway station that is known for its architectural mix of Victorian Gothic Revival and traditional Indian features. Built in 1888, the station is the grand reminder of the British Raj pre-independence and is still one of the most historical landmarks in Mumbai. We recommend staying at the best hotels in Mumbai near this attraction.

Built in 1913, Grand Central Terminal is one of New York City’s most historical landmarks and the busiest train station in the USA. The building’s facade on 42nd Street has a true Beaux-Arts design, large arches flanked by Corinthian columns are topped by a large sculpture group designed by Jules-Alexis Coutan.

Komsomolskaya metro station is  the most beautiful subway station in Moscow. The design of the station is supposed to fulfill the expectations of the Metro as being the “Palace for the People” – high ceilings, marble pillars with elaborate capitals at the apex, ceramic stucco work, gilded bas-relief compositions.

Atocha railway station, the first train station in Madrid and the largest one. The station is exceptional with its steel and glass construction, but the highlight is the vivid tropical gardens that line its concourse.

The Stockholm subway system is said to be the world’s longest art exhibit – 110 km (68 miles) long. This station opened in 1957 and today it is the only station where all metro lines meets. T-centralen is filled with art, when you really have a look. Besides from the big paintings on the ground bottom, all seats are artworks. If you look at the walls you’ll also see what a craft it is. The blue vines and flower motifs running along the walls were designed by Per Olof Ultvedt in 1975, they tells an exciting story that extends from the artistic pioneers of the 1950s to the art experiments of today.

St Pancras Station was opened in 1868 and is one of the wonders of Victorian engineering. It is a masterpiece of Victorian Gothic Architecture and one of the most elegant stations in the World. Nowadays St Pancras International Station is one of the biggest landmarks in London and serves as a gateway to Europe. It is used by 45 million passengers annually and is home to the Eurostar.