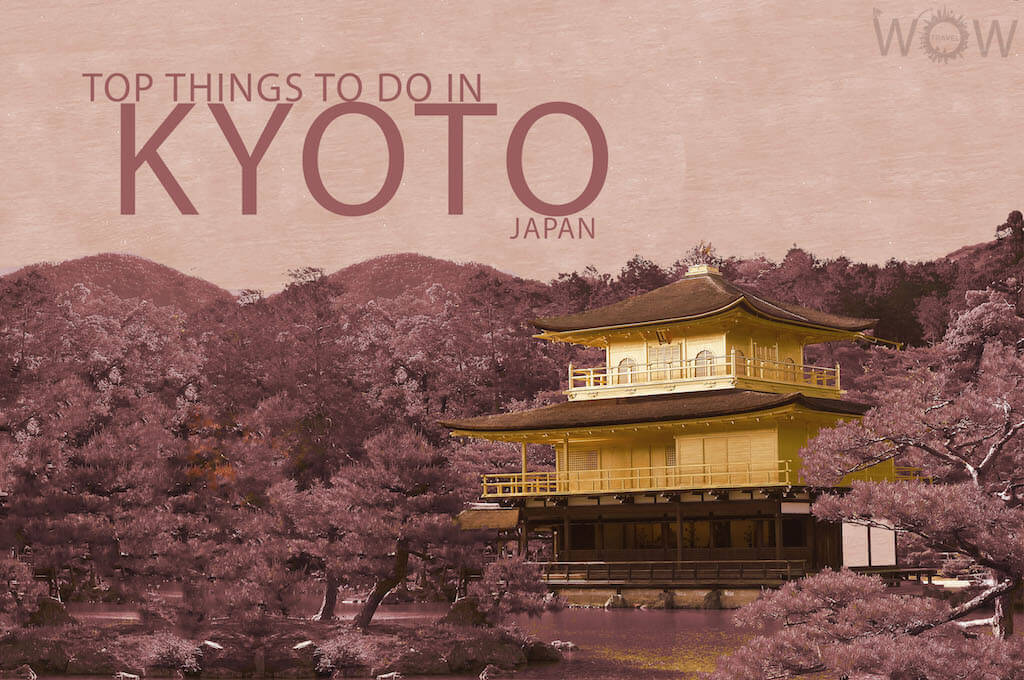 Standing in stately contrast to the neon-lit adrenaline of Tokyo, Kyoto is quieter, quainter and the perfect place to experience authentic Japanese culture with a plethora of cultural sights. From ancient palaces to hidden temples. Japan’s capital from 794 to 1868, Kyoto, is famous for its Geisha district and is an important city in Japan’s history. With thousands of classical Buddhist temples, as well as gardens, imperial palaces, 400 Shinto shrines and traditional wooden houses, it is no wonder why Kyoto carries a reputation as Japan’s most beautiful city. Get started with our list of the Top 10 Things To Do In Kyoto.

Temple of the Golden Pavilion (Kinkaku-ji)

Kinkaku-ji is one of the most well-known temples in Japan. The main pavilion is covered in gold leaf and shimmers in front of a pond – kyoko-chi (Mirror Pond). Kinkakuji is situated at the foot of Kinugasa Hill and in the north-west of Kyoto. The building’s first purpose was to serve the retiring Shogun Ashikaga Yoshimitsu (1358-1409) as a residence. The gold-leaf-adorned building was converted into a Zen temple shortly after his death. In an event that was later fictionalized by the renowned author Yukio Mishima, a 21-year-old monk burned Kinkaku-ji Temple down in 1950. The temple was rebuilt in 1955 and continues to function as a storehouse of sacred relics. Don’t forget to visit Nijo Castle while you are in the area: it was Japan’s imperial palace for a brief span.

Gion, in eastern Kyoto, is a small neighborhood known as the Geisha District. It had developed as a shrine town of Yasaka Shrine, since the 17th century and nowadays it is famous as “the neighborhood of Geisha”. This is the district where geishas were trained, and today tourists can get a geisha makeover and explore the historical streets dressed how its inhabitants would have looked. Although many of Gion’s streets are busy and modernized now it is still possible to find quiet, traditional lanes lined with teahouses – try Hanami-koji and Shirakawa-Minami dori.

To-ji, means Eastern Temple, was founded at the beginning of the Heian Period just after the capital was moved to Kyoto in the late 700s. The large temple, together with its now defunct sister temple Saiji (“West Temple”), flanked the south entrance to the city and served as the capital’s guardian temples. Toji Temple is one of Kyoto’s many UNESCO world heritage sites and it is the tallest wooden structure in Japan.

More affectionately known as the “Kyoto Kitchen”, Nishiki Market is a narrow street packed with food vendors. It is located in downtown Kyoto and has began as a fish market more than 700 years ago. Wander around Nishiki Market to purvey a bewildering array of foodstuffs, to marvel at the world’s most expensive mushrooms (matsutake: around £750 a pound) and sample more affordable takeaway treats, such as tofu doughnuts.

Pontocho Alley, which runs parallel to the west bank of the Kamo-gawa River between Sanjo and Shijo is considered by many Kyoto residents and visitors to be the most beautiful street in the city. It is lined with traditional shops and restaurants, and no cars, modern buildings or gaudy signs are allowed. By day, it’s not much to look at. But in the evening, Pontocho becomes a magical place – the sort of street you might have imagined before arriving in Asia. Many of the restaurants and clubs here are pretty forbidding for foreigners without the right connections, but there are a number of places that welcome foreigners and have English-language menus and English-speaking staff. If you spend some time waiting at the southern end of the lane around dusk on a Friday or Saturday evening, you’ve got a good chance of spotting a maiko (apprentice geisha) or geiko (fully-fledged geisha) scurrying to an appointment at one of Pontocho’s elite clubs. Source: insidekyoto

This intriguing shrine was dedicated to the god of rice and sake by the Hata clan in the 8th century. The magical, seemingly unending path of over 5000 vibrant orange torii gates that wind through the hills behind Fushimi Inari-taisha Shrine makes it one of the most popular shrines in Japan. This shrine also features dozens of statues of foxes. The fox is seen as the messenger of the god of grain foods, Inari, and the stone foxes are often known by the same name. The keys often depicted in the fox mouths are keys to granaries. This shrine is the central location for some 40,000 Inari shrines throughout the entirety of Japan. Source: kyoto.travel

Kyoto Stations, opened in 1997 and designed by the known architect Hara Hiroshi, is a futuristic, ultra-modern homage to the historic city. It boasts of a concourse with an impressive 60-meter (196 ft)long atrium, a 45-meter (148 ft) long raised glass passageway connecting the eastern and western parts of the station, and a large 171 step set of stairs. While you are at the station, cross the road and pay a visit to Kyoto Tower. The 131-meter (430 ft) Kyoto Tower is a significant landmark in the city. Visitors enjoy the panorama view of the city from the top of the tower. There is an ‘onsen’ public bath in the underground.

Heian Shrine is a relatively young shrine in Kyoto that was constructed in 1895. It boasts the largest torii (sacred gate) in Japan and lovely gardens. It Is here that you will find those stepping stones from Sofia Coppola’s critically acclaimed film Lost in Translation.

Kiyomizu-dera refers to several Buddhist temples but most commonly to Otowasan Kiyomizudera. The temple dates back to 798, but the present buildings were constructed in 1633. The main hall of Kiyomizu-dera is notable for its vast veranda, supported by hundreds of pillars, which juts out over the hillside and offers impressive views of the Kyoto city. You should visit in the spring or fall to take in the scenery of the cherry and maple trees below. Source: gojapango

Take a day trip to the attractive riverside resort town of Arashiyama. Photograph the iconic wooden bridge; visit the garden in Tenryu-ji temple, which is a UNESCO World Heritage Site; and most importently, get lost in the remarkable Bamboo forest at the back of the Tenryu-ji Garden. Standing amid these soaring stalks of bamboo is like being in another world.