Top 10 Things To Do In Marrakech 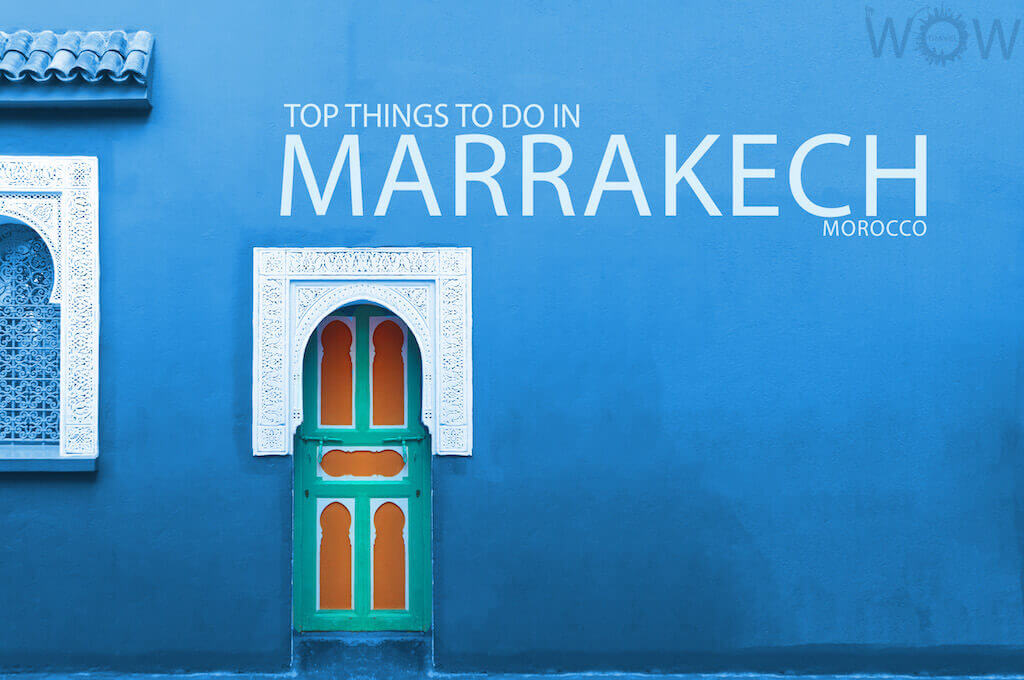 Marrakech is not Morocco’s capital city (that’s Rabat), It’s not the country’s largest metropolis (that’s Casablanca), It’s not even the African nation’s oldest city (that’s Fes). But Marrakech triumphs over other Moroccan cities as the unofficial cultural center. For nearly a thousand years, Marrakech has been a melting pot of civilizations – a vibrant mixture of Sufi, Muslim and French colonial influence – built upon a tribal foundation of the native Berber culture. This former imperial city in western Morocco is nowadays a major economic center and home to mosques, palaces, gardens as well as the famous Medina, known for its winding streets, riads (courtyards), chaotic markets and exotic architecture. Get started with our list of the Top 10 Things To Do In Marrakech.

Djemaa el Fna is the largest square in Africa and one of the symbols of Marrakech since its foundation in the 11th century. During the day, you will find fruit juice stands, henna tattoo artists, and snake charmers. In the evening, the square fills with food vendors, musicians, and fortunetellers. Have a mint tea at one of the rooftop cafés and enjoy the view.

The Koutoubia mosque is approximately 67 meters (221 ft) high, and is the largest mosque in Marrakech. Its minaret, built in a traditional Almohad style and topped with four copper globe, is what dominates your view when you see Marrakesh from a distance for the first time. It is one of the oldest monuments of classical Moroccan architecture and the city’s highest. The mosque is ornamented with curved windows, a band of ceramic inlay, pointed merlons, and decorative arches; it has a large plaza with gardens, and is floodlit at night.

If you like shopping you will love the Souks (markets) in the old town. The twisting medieval passageways of the souks can be intimidating, but the best approach is to just plunge in. Get lost in a maze of market stalls with Moroccan goods from jewelry, teapots, ceramics and lamps to hand made carpets, clothes, leather, spices and so much more. Be prepared for some friendly bargaining!

The garden was designed by French artist Jacques Majorelle, who bought the property in 1931 and then spent 41 years turning into a luxurious oasis. The garden was made in the 1920s with marble pools, raised pathways, banana trees, groves of bamboo, coconut palms, and bougainvilleas. Years later, it was purchased and restored by the fashion designer Yves Saint Laurent and Pierre Bergé. They lived there, drawing inspiration from the garden retreat and adding new species of flowers and plants. When Yves Saint Laurent passed away in 2008, his ashes were scattered at the Jardin Majorelle and a memorial was built there.

No trip to Marrakech is complete without having tried the typical Moroccan hammam. Hammam means “spreader of warmth.” It is a bathing retreat that has its origins over a thousand years ago in Rome and is still found today in Morocco as well as Turkey and Spain. After soaking in the steam, you will be lathered up with ghassoul (black soap made from natural mineral clay) and then scrubbed down thoroughly with a kessa (a sort of rough glove). It also fairly cheap, around 40$ for a sauna, scrub and one hour massage.

El Badi Palace was a palace that took 25 years to build in the late 16th century by Saadian sultan Ahmad al-Mansur, the Midas of Marrakech. This palace was once a luxurious complex consisting of buildings with over 350 rooms, courtyards, gardens and a large pool, which were decorated in gold, ivory, onyx, Italian marble, woodwork and semi-precious stones. Sadly the El Badi Palace has not survived over the years and its ruins are a reminder of the destruction of wars.

The Ben Youssef Medersa, an Islamic school attached to the Ben Youssef Mosque, is home to some of the most beautiful art and architecture in Marrakesh. Not many tourists visit this Koran School and secondly, it is literally hidden in between the old, medieval city center of Marrakech, Morocco. The school was founded in the 14th century and students here memorized the Koran by rote. Closed down in 1960, the building was refurbished and reopened to the public as an historical site in 1982.

The Saadian Tombs are the resting place for around sixty members of the Saadi Dynasty that ruled the region in the 16th and 17th centuries. For a long time, the tombs were abandoned until they were rediscovered by the French by accident in 1917 and then re-opened to visitors. Inside you will find a number of perfectly preserved and richly decorated sarcophagi, at times rivaling the treasures of the Alhambra in Granada. The earliest tomb is thought to date from 1557 and all are well preserved having been sealed off by Alaouite Sultan Moulay Ismail.

The 19th-century palace was a set of houses that were collected and converted into a palace by a man called Si Moussa who had risen from being a slave to the grand vizier of the Sultan of Morocco. It is a beautiful example of Islamic and Moroccan architecture with its elaborate ceilings, archways, stained glass lamps and exquisite tile work.

Take a day trip to the nearby Atlas Mountains. The High Atlas, the greatest mountain range of North Africa, is perhaps the most beautiful and intriguing part of Morocco. It has retained a remoteness which until recent decades was virtually complete and contains villages where the way of life has changed little for centuries. Popular destinations include Berber villages, kasbahs (fortresses) and the Ouzoud waterfalls. Go visit the picturesque villages of Asni and Imlil, both are Berber villages that lies on the edge of the Toubkal National Park. Asni is known for its weekly souk which is held every Saturday. On the way back you should make a stop at Sir Richard Branson’s Kasbah Tamadot, a great place for lunch or coffee.