Top 10 Things To Do In Mumbai 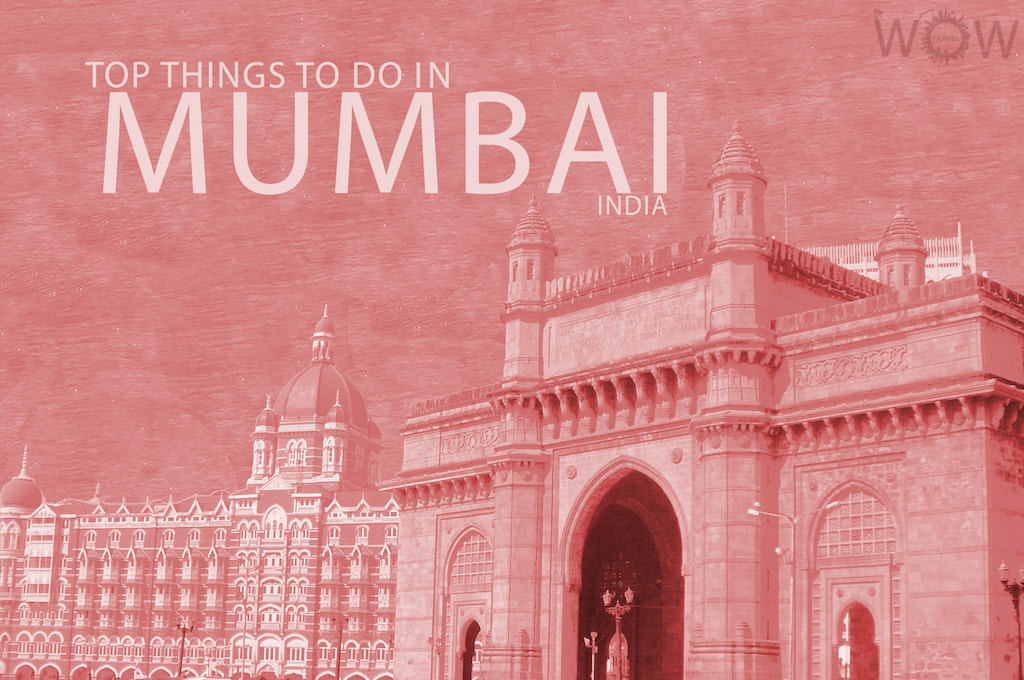 Rich, vibrant, colorful, spicy, exotic, expressive, warm, friendly, busy, spiritual, millenary are just some of the adjectives used to describe Mumbai. Whether you go on a luxury trip to India or backpacking this city has it all for every single kind of traveler. Just like any other harbor city Mumbai is a bustling metropolis with more than 14 million inhabitants and it is home to the world’s largest movie industry also know as Bollywood. Life is so active in the city that sometimes walking is sometimes faster than driving through the busy streets of Mumbai. Coming here is also a unique and “hot” culinary experience with no comparison. Let’s just board a plane now and embark on a journey you will cherish forever. Check out WOW Travel’s Top 10 Things To Do In Mumbai, namaste!.

This colossal piece of architecture is a monument built during the British Raj in the south of Mumbai and overlooks the Arabian Sea also known by locals as the Taj Mahal of Mumbai and it is the city’s number 1 tourist attraction. This monument was built to commemorate the landing of their Majesties King George V and Queen Mary when they visited India in 1911.

This Hindu temple is dedicated to Lord Shri Ganesh and was built in 1801. The shrine for Siddhi Vinayak “Ganesha who grants your wish” brings followers and tourists alike looking to have their dreams or wishes come true. It has wooden doors that are carved with images the eight manifestations of Ganesha. The inner roof is plated with gold, and the central statue is of Ganesha. This temple became extremely famous due to the amount of politicians and Bollywood film stars who continuously visit to seek the blessings of Lord Ganesha.

This is one of the most famous temples of Mumbai located in the area called Mahalaxmiarea. A very rich merchant named Dhakji Dadaji had it built in 1831 and dedicated it to the deity of Devi Mahatmyam. This sanctuary contains images of the goddesses Mahalakshmi, Mahakali and Mahasaraswati. People travel long distances from every corner of India to this temple during the vstivity of Navaratri, holding flowers, coconuts and sweets which they offer to the goddess to show they love and faith.

The Global Pagoda is tangible proof of the re-birth of the Buddha’s teachings in India and the Vipassana Pagoda is a central symbol of this spiritual tradition. This pagoda is a replica of the Shwedagon Pagoda of Yangon in Myanmar as a show of respect and gratitude. Tourists and locals come to see the genuine relics of the Buddha which are enshrined here and because it is one of the largest stone monuments in Asia. Architecture lovers spend hours appreciating and imagining how such a monumental structure was built. It contains the biggest pillar-less stone dome on earth, approximately 2.5 million tons of stone was used in the construction. It took 11 years to build it however it is expected to exist as a beacon of Peace and Harmony for the next 1000 years.

It all started when Jesuit fathers were sent to take care of the ministry in Bandra and brought a wooden statue of Our Lady Mother of God from Portugal and placed on the main altar of a small church on a hill in Bandra, this immediately began to attract a large number of devotees. Nowadays, the Basilica of Our Lady of the Mount is a symbol of faith for all Roman Catholics in the region. A week-long celebration known locally as the Bandra Fair takes place here every year and it starts on the first Sunday after 8 September in order to celebrate Virgin Mary’s birthday. In 1954 the Church was given the status of a Minor Basilica by Pope Pius XII. Services are available daily in both English and Darshan.

This popular tourist attraction is located the western outskirts of Mumbai and it is a group of rock-cut monuments near the forests of the Sanjay Gandhi National Park. Upon arrival, visitors have a 6 km walk from the gates to the entrance of the caves. We remember counting almost 51 inscriptions and 26 epigraphs on the walls in different languages like Brahmi and Devanagari as well as images of Buddah. make sure to be there early before it gets too hot, they open the doors at 07:30am. It is an interesting attraction as it combines both culture and nature. Families spend the morning learning about history and religion and the afternoon wandering around the beautiful forest that surrounds the site.

This is one of many islands near Mumbai but it is by far the most popular tourist destination due to the many caves and temples carved in the rock which gave the island the name of the City of Caves. It is very easy to access by ferry or small boats which depart from the Gateway of India between 9am and 2pm, it is a 1hr ride and tickets can be purchased in the spot. It is a nice 1 day trip for solo travelers or families, there are stalls selling all kinds of souvenirs as well as food and drinks stalls.

Haji Ali Dargah is both a mosque and dargah or tomb situated on an islet off the coast of Worli in the Southern part of Mumbai. It is one of the most famous landmarks of the city due to its exquisite Indo-Islamic Architecture with beautiful blue and green glass in the windows and incredible writings in arabic calligraphy on the white marble walls. It is only a few 500 meters (1640 ft) from the coast and visiting it depends on the low or high tide of the day but this makes it more interesting and exciting, it is definitely one of the highlights of the visit to this mosque.

Formerly known as Prince of Wales Museum of Western India is nowadays the the main museum in Mumbai. It was built thanks to the generosity of generous aristocrats and wealthy citizens of Bombay in the early 20th century. It is well located in the center of the city near the Gateway of India. It is definitely a must on everyone’s list as it helps us understand the country’s vast history and traditions, it contains more then 50,000 artifacts of ancient Indian history divided in three sections: Art, Archaeology and Natural History.

Is a picture stop for every tourist that comes to Mumbai. This famous 85m. clock tower is in the southern part of the city within the  campus of the University of Mumbai. It was designed by an English architect and it is always compared with the Big Ben. The tower was built in a fusion of Venetian and Gothic styles. It is built out of the locally available buff coloured Kurla stone. The tower has one of the best stained glass windows in the city. It used to be the tallest building in Mumbai in the late 1800’s and early 1900’s.