Top 10 Things To Do In Stuttgart 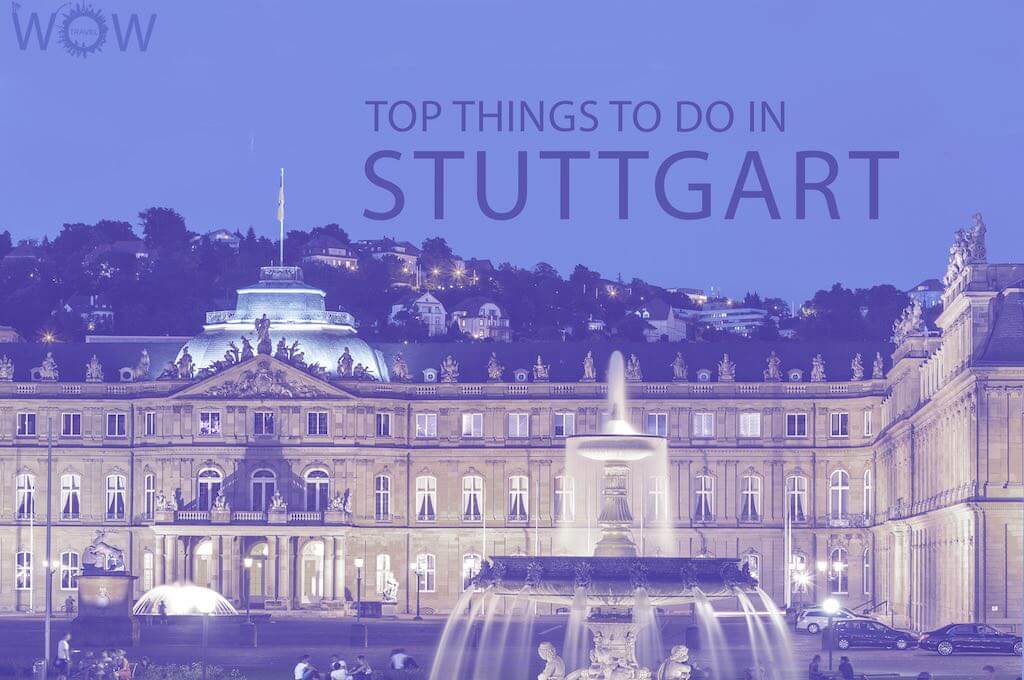 Situated in the verdant Neckar Valley and home to world-famous companies, Stuttgart combines the best of nature and human ingenuity. The city sits on Bernhartshöhe hill, about 126 km southeast of Heidelberg and an hour from the famed Black Forest. Greenery is all around here, from the vineyards perched on the hillsides to leafy woodlands by the water. Stuttgart is also among the most prosperous cities in Germany, boasting a robust presence in science and industry. A rich culture that encompasses the arts, cuisine, winemaking, and much more is likewise part and parcel of this city’s allure. Whatever your interest, you’ll find no shortage of things to do in Stuttgart. And don’t forget to use a StuttCard. With it, you can take advantage of free entry to all museums and discounts on hop-on hop-off bus fares.

Spanning 32 hectares, this magnificent Baroque structure is Germany’s largest palatial estate. The Duke of Württemberg (Charles Eugene) lived here. Duke Frederick II—later King Frederick I—also used the palace as his summer residence. There are more than 452 rooms spread across 18 buildings in the palace complex. Located 20 minutes from the city center, it’s a must-see on any list of things to do in Stuttgart. A day seems hardly enough time to explore the palace’s myriad attractions. These include splendid churches, a unique palace theater, and several museums. There’s even an interactive museum designed specifically for children.

Duke Charles Eugene had this stately Rococo palace built in the 1760s as a hunting lodge and refuge. He meant for it to be a place for reflection and solitude. Once, it was connected to the Ludwigsburg Residential Palace by the 13-km-long Solitude Allee Avenue. Today, some parts of the path still exist. Inside the palace, the rooms reflect late Rococo and early Neoclassical design styles. Look up and see intricate paintings of heavenly creatures on the walls and the ceiling. And if you climb to the viewing platform on the main building’s cupola, you’ll be treated to amazing views of the palace complex.

For lovers of cars and architecture, visiting the Porsche Museum is among the top 10 things to do in Stuttgart. Designed by Delugan Meissl Associated Architects of Vienna, this ultra-modern building is a stunner from every angle. The museum first opened its doors in January 2009, providing an appealing, approachable and friendly place for visitors to learn about the prestigious Porsche brand. The 911 and many other iconic Porsche automobiles feature prominently in the permanent exhibitions. Also popular is the Porsche Touchwall, an interactive attraction that shows highlights of the company’s history. And if driving your dream Porsche is on your bucket list, you can sign up for the museum’s thrilling Porsche Drive program. Seeing the museum from above is also quite an experience, one you can do with a private sightseeing flight. Soar over Stuttgart’s car manufacturing hub and other city landmarks and enjoy the panoramic sight.

Flanked by venerable buildings in Stuttgart’s old city center, Schillerplatz (Schiller Square) has long been a gathering place for the townspeople. Before that, the area functioned as a ceremonial venue for dukes. The square is named after Friedrich Schiller, a German dramatist, poet, historian, and philosopher who spent part of his youth in Stuttgart. Nowadays, a flower market adds color to the square on the mornings of Tuesday, Thursday, and Saturday. If you come in August, you’ll be in time for the Stuttgart Wine Village event here. Meanwhile, those who visit Stuttgart in December can enjoy the annual Christmas Market held in Schillerplatz.

More than 1.5 million people visit the Wilhelma zoo and botanical garden every year, making it one of Stuttgart’s top attractions. The zoo shelters some 1,200 animal species including penguins and other birds, marsupials, and big cats. The botanical gardens are just as diverse plant-wise, with more than 8,000 types of trees, shrubs, and flowers. One of the popular things to do here is to participate in a guided tour organized by the Wilhelmaschule, the zoo’s education department. Not only will you learn more about zoology and botany, but you’ll glean some knowledge about architecture as well. The gorgeous buildings here, built in the Moorish style for King Wilhelm I, are just as fascinating as the zoo’s plants and animals. Thinking of spending the holidays in Stuttgart? Then you’re in for a winter wonderland treat at the Christmas Garden at the Wilhelma Zoo. Dazzling lights in the snow-covered trees, colorful decorations, and festive holiday music make a visit to the zoo a Christmas to remember.

Called the Johanneskirche in German, this 19th-century Protestant church is a fine example of the Gothic Revival style of architecture. It’s one of the creations of architect Christian Friedrich von Leins, who also designed the summer home of King Charles I of Württemberg. The main church building saw almost complete destruction in World War II. Modern vaults replaced the original Gothic ones during this lakeside church’s reconstruction after the war. However, the tower remains incomplete—a conscious reminder of the ravages of war. The church is among Stuttgart’s many architectural gems. By day, it’s beautiful in a haunting sort of way. By night, it looks like something out of a fairy tale: a magical building reflected in Fire Lake’s calm waters.

A monolithic structure standing 40 meters tall, Stuttgart’s Municipal Library towers over the lively Mailänder Platz (Milan Square) in the European Quarter, just steps from the chic Jaz in the City Stuttgart hotel. Designed by architect Eun Young Yi of South Korea, the exterior features thousands of glass blocks that give the building a modern, streamlined look. But when night falls, the library transforms into a luminous blue cube. Certainly, the facade’s clean, simplistic look carries to the library interior. White staircases in pleasing symmetry connect the library’s levels and colorful books numbering in the thousands break the stark whiteness of the stairs, walls, and floors. Nowadays, the library serves as one of the city’s cultural and intellectual hotspots. It’s no wonder then that spending an hour or two here is among the top 10 things to do in Stuttgart.

The Altes Schloss (Old Castle) was originally a water castle built in the 10th century. Consequently, the dukes and counts of Württemberg called it home. By the end of the 18th century, the castle had fallen out of favor with the royals. Instead, it became the residence of court officials and their families. Fires and war took their toll, and in the 20th century, the castle underwent extensive restoration. Today, it houses the Württemberg State Museum where the exhibits include Stone Age and Roman relics. Also within the castle premises are the Junges Schloss children’s museum and the tombs of King Charles I and his wife Olga.

Like several other grand residences in Stuttgart, the Neues Schloss (New Palace) was Duke Charles Eugene’s project. When he was still in his teens, he commissioned it to replace the Old Castle in the 18th century. The palace served as the royal residence of kings such as Frederick I, William I, and Charles I. However, William II—the final king of Württemberg—decreed that dukes would no longer live in the palace. Consequently, it opened its doors to the public for the first time in the 20th century. Like many of Stuttgart’s historic buildings, the New Palace underwent major restoration after World War II. Today, it houses the offices of the State Ministries of Finance and Education. If you sign up for an exclusive city walk, you’ll get to know more about Stuttgart’s history and culture than you would from a DIY tour.

For nature lovers, spending a day at Bärensee Lake is one of the top 10 things to do in Stuttgart. it’s just a 15-minute drive west from the city center, but it’s a different world altogether. Although swimming isn’t allowed here, it’s still a wonderful place to bask in nature’s beauty. You can stroll or jog along the scenic hiking trails or have a picnic under a gigantic tree. In fall, the lake area is particularly beautiful, when the foliage turns russet and gold. Explore further and you’ll find the Bärenschlössle (Bear Palace), the Duke of Württemberg’s 18th-century pleasure palace. It’s been torn down and rebuilt several times since then. Today, it’s home to a deer park and a popular restaurant.