Top 10 Things To Do In Villach 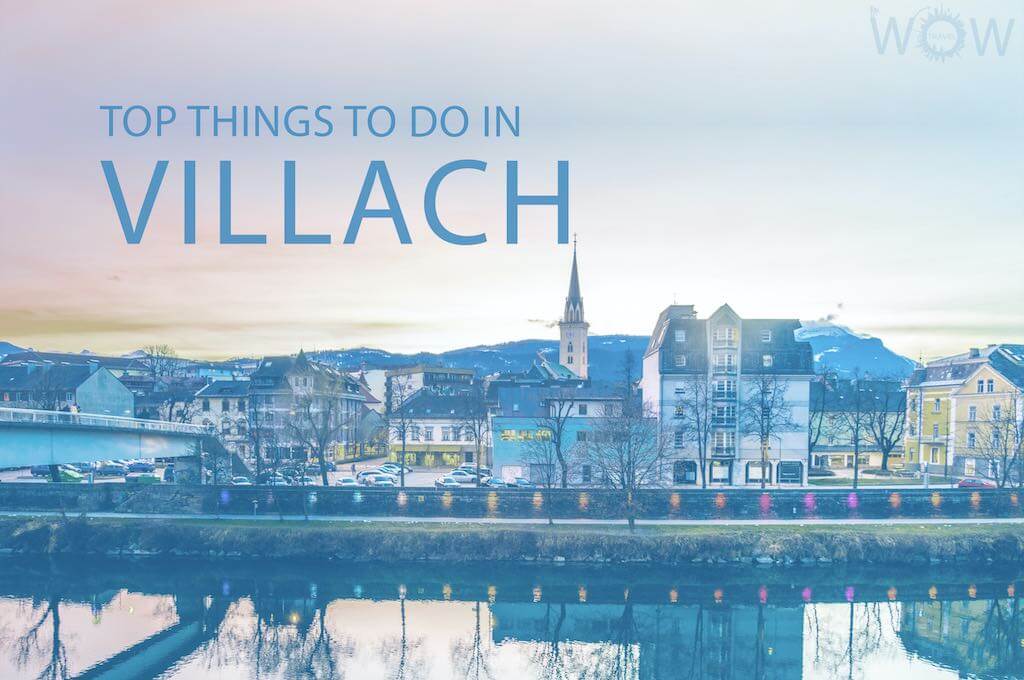 Is Villach worth visiting? If you love nature, history, and culture, it certainly is! There are plenty of things to do in Villach no matter what time of the year you decide to visit. In the spring, you can sit under the tulip trees beside the River Drau while in the summer, the lakes offer tempting ways to cool down. Hike the colorful trails in the fall, and ski down the powdery Alpine slopes in the winter. Nestled among mountains in the Carinthia lake district, it’s a great base for day trips to nearby Italy and Slovenia. And there’s certainly no shortage of Villach, Austria hotels to choose from for an extraordinary vacation. Whether you’re staying a day or a week, be inspired by our list of places to visit in Villach, Austria.

Various dukes, emperors, and noble Austrian families have called this hill castle home since the 14th century to the 17th century. A fire caused by lightning destroyed the castle in 1812 and it was left to ruin. Today, it’s one of Villach’s top attractions and many people make the scenic ascent to marvel at the medieval fortress walls. Landskron Castle is also home to the Adler Arena, where eagles and other birds of prey are featured in breathtaking shows from April through October.

Want a chance to get up close and personal with Japanese macaque monkeys? Then head to Affenberg, one of the more unusual places to visit in Villach, Austria. Just a stone’s throw from Landskron Castle, it’s a popular destination for families. The monkeys, which live in large enclosures surrounded by trees, aren’t shy about mingling with visitors. And if you visit in summer, they might even show off their swimming and diving skills. Monkey Mountain welcomes guests from April through November. There are guided tours every day, and in high season (June–September) these tours happen every 30 minutes.

With its pink and white exterior, octagonal dome, and magnificent double towers, this Catholic church is certainly one of the many photogenic places to visit in Villach, Austria. Perched on the River Drau’s southern bank, it’s a fine example of late Baroque religious architecture. The building dates from the 18th century, but there was a church that preceded it whose beginnings could go back to as far as the 8th century. Beautiful artwork adorns the church’s interior, including statues and paintings of biblical figures. Also noteworthy is the restored organ, which was built in the 1860s by Josef Grafenauer.

One look at this stunning lake is enough to answer the question “Is Villach worth visiting?” Also called Ossiacher See, it’s one of Carinthia’s largest lakes. Wooded hillsides and towering mountains act as a beautiful backdrop for the aquamarine water. Lake Ossiach attracts those with a penchant for aquatic sports. Windsurfers, waterskiers, rowers, and swimmers are common sights here when the weather is warm. But if you’d prefer to stay dry, that’s no problem. There are plenty of picturesque and well-marked biking and hiking trails for you to explore around the lake.

Situated in Villach’s southern district, the colorful and tree-shaded Schiller Park (or Schillerpark) is certainly worth a visit. It’s perhaps best known for the “Relief von Kärnten,” a magnificent scale model of the state of Carinthia. Constructed in 1913, the model measures almost 2,000 square feet (180 square meters) and lays out Carinthia’s mountainous features in scales of 1:5,000 and 1:10,000. You’ll also find several statues in the park. One notable example is a cast-iron sculpture depicting Ceres, the Roman goddess of agriculture. Created by Frank Melnitzky in 1867, it’s been a park fixture since 1908.

The clock tower of this ancient Catholic church stands tall above the heart of the city. Soaring to a height of more than 300 feet (94 meters), the steeple is the highest of its kind in Carinthia. Climbing more than 200 steps to the tower keeper’s flat is worth the effort; you’ll be rewarded with awesome views of Villach, the Julian Alps, and the Hohen Tauern mountain range. The interior is a sight to behold, with its red pillars and cobweb-like ceiling. The magnificent Baroque altar, Gothic font, and 16th-century stone pulpit are also among the church’s notable features.

Carinthia’s oldest nature reserve, this park ranks among the top places to visit in Villach, Austria. As you make your way along the Villach Alpenstrasse road to reach the park, the breathtaking views will give you a taste of what’s to come. The pristine landscape, the wild variety of plants and animals, all these and more showcase the best that nature has to offer. When you reach the peak—about 7,000 feet (more than 2,000 meters) above sea level—you’ll be treated to a vista of puffy clouds, lush forests, and the winding river far below. Up here, you’ll also find the Sendeturm Dobratsch radio tower. And don’t forget to visit Kirche Dobratsch (Maria am Stein) and Windische Kirche, the two highest pilgrimage churches in the Eastern Alps.

It’s arguably one of Carinthia’s smallest lakes, but that doesn’t mean Lake Faak (Faaker See) isn’t big when it comes to activities on offer. Visit Villach, Austria, in summer and you can take your pick from fun things to do in the crystal-clear water turquoise. From stand-up paddleboarding and sailing to fishing and canoeing, there’s something for everyone here. You won’t find any motorboats on Lake Faak, so you and your little ones (if any) can swim, kayak, and windsurf freely. Out of the water, you can choose to hike, ride a bicycle, or go horseback riding. Or do them all, if time and weather permit.

Stretching across the River Drau is the ever-popular Main Square. It’s in the heart of Villach’s old town district, so it’s no surprise that some of the city’s historic sites can be found here. For instance, the square’s centerpiece, the Trinity Column, dates back to 1739. Several homes that belonged to merchants are also located here; the 16th-century Paracelsus Hof is one example. The square’s cafes and restaurants are great places to relax after shopping in the area’s shops and galleries. And don’t worry about places to stay: there’s a good selection of Villach, Austria hotels within easy reach. Also, if you’re planning a December vacation in Villach, you’ll be in time for the Magic Christmas Tour. Prepare for a truly enchanting holiday where you can experience Austrian Christmas traditions and see the bright and festive Christmas and Advent markets.

Winter, spring, summer, or fall, this mountain paradise is a star for all seasons. It certainly deserves its place among the best places to visit in Villach, Austria. In the summer, you can take advantage of the pleasant weather to explore the beautiful Nordic hiking trails or soar like a bird on a paragliding adventure. Kids and adults can take a spin in go-karts and enjoy the climbs and hanging bridges of Adventurepark Gerlitzen. In winter, the mountain transforms into a fantastic ski resort. Powderhounds can ski and snowboard down nearly 28 miles (45 km) of epic white slopes. There’s also a ski and snowboard school, so kids and adults alike can level up their snowsports skills. And if you book a room at the Thermenhotel Karawankenhof—one of the esteemed Villach, Austria hotels, you can warm up later in the heated pool, saunas, steam baths, and hot tubs free of charge at the adjoining Kärnten Therme thermal spa.