Top 11 Things To Do In Winnipeg 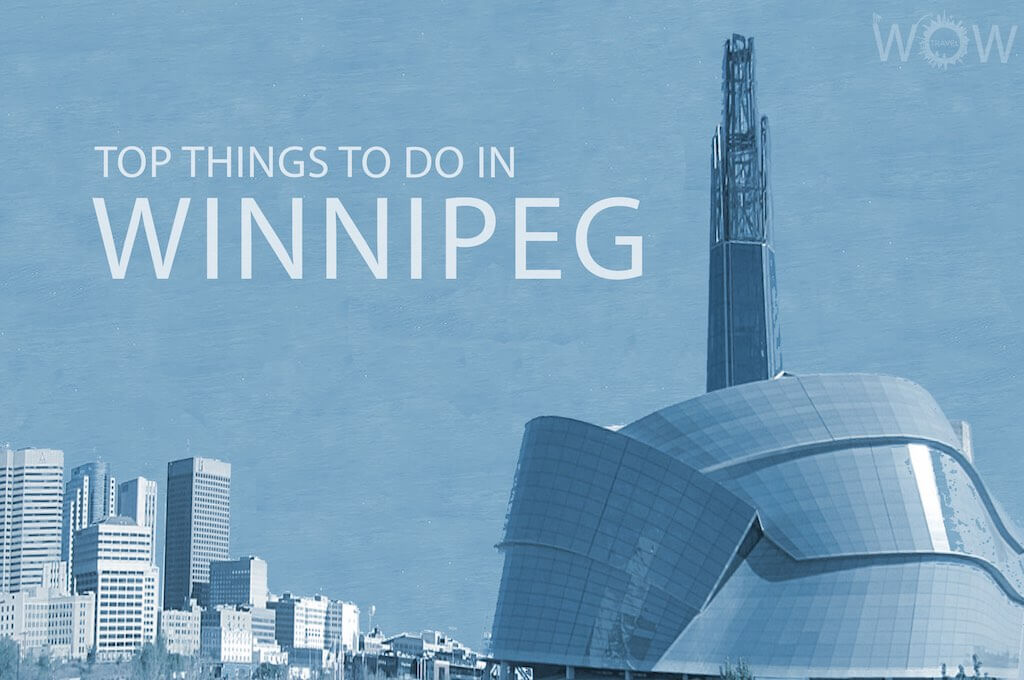 Winnipeg’s strategic location at the confluence of the Assiniboine and Red Rivers, and at the eastern edge of the Canadian Prairies, has earned it the sobriquet ‘Gateway to the West.’ The largest city of Canada’s Manitoba province is a surprisingly sophisticated melting pot of culture. There is much to see and experience in this city that rises above the prairie; from its interesting historic district and world-class museums to its diverse dining options. Winnipeg is an epicure’s delight with its fantastic food and beverage options and an ever-expanding craft beer breweries.
[booking_product_helper shortname=”winnipeg”]

One of Winnipeg’s most distinctive landmarks is the neoclassical beaux-arts Legislative Building built in 1920. The extensive grounds with well-manicured lawns and gardens feature immortalized gods and heroes. Various hieroglyphic symbols and patterns will leave a Dan Brown fan quite mesmerized. A four-meter high bronze statue weighing five tons known as the Golden Boy stands grandly at the top of the copper dome. This gold plated statue with a sheaf of wheat in his left arm and torch in his right hand is symbolic of Manitoba’s agricultural prosperity and eternal youth.

This state-of-the-art building is a recent addition to Winnipeg’s cultural scene. Designed by architects from Albuquerque, New Mexico who won an international architectural competition for the design, the museum has the distinction of being Canada’s first new national museum since 1967. The Canadian Museum of Human Rights was set up with the aim of raising awareness about human rights, relevant to Canada and the world at large, and opened its doors to the public in 2014. The museum has had its fair share of controversies but it is undoubtedly a great place to get a better understanding of these serious issues affecting so many countries.

Standing as a poignant reminder of a grand past is the white stone façade of the St. Boniface Cathedral, founded in 1818. The building, which was gutted by fire, was once one of the best examples of Romanesque architecture. The current cathedral behind the old facade dates back to 1972. Not far off is another important piece of Manitoba’s history, the oldest building in Winnipeg, the former Grey Nuns convent that now houses the St. Boniface Museum. The museum which also served as a girls’ school and orphanage showcase the history of Manitoba’s French minority and also the establishment of St. Boniface.

A great place for animal lovers and kids is the Assiniboine Zoo located within the massive Assiniboine Park. Although the zoo is home to a wide variety of animals from around the world notably the Siberian tiger, animals from the northern latitudes are more predominant. The International Polar Bear Conservation Center is a big hit with visitors. Apart from the zoo, the park also has other notable attractions like the famous Leo Mol Sculpture Garden and a steam train. The park with its various facilities is a great place to unwind.

Largely devoted to the natural and human history of the province, the Manitoba Museum is a great place to get an insight into the history of the region. Besides showcasing the intriguing past of the region, the museum also has an interactive Science Gallery and Planetarium. Other notable attractions at the museum are the replica of a 17th-century ketch sailing ship, Nonsuch, a 95 million-year-old Pilosaur fossil and a recreation of the Northern Lights

Located at the confluence of the Red River and Assiniboine River is the iconic Forks Market. Once a space for stables where the horses of competing rail companies were housed, the Forks Market was created by joining the two-horse stalls by bridges and a courtyard. It’s a great place to enjoy some local produce and also to pick up artworks from local artisans. There are plenty of food options at the newly renovated food hall called The Common. The market also has a six-storey tower with a viewing platform which can be accessed via the elevator or stairs.

A great place to see some migratory birds is at the Oak Hammock Marsh. The marshland is the temporary home of hundreds of thousands of birds with up to 400,000 geese cackling their way here during autumn. There are a number of short trails that can be explored and a floating boardwalk to get up close to these winged creatures.

Near the riverside at the confluence of the two rivers is the nine-acre Forks National Historic Site, a historic theme park that focuses on preserving the long history of human presence in the area. Interactive exhibits, sculptures, and walking trails make up this beautiful space. An amphitheater for performances and events is also part of the National Historic Site.

Small trendy shops, restaurants with outdoor patios and some great street art make up this area of Winnipeg, once known as ‘Little Italy.’ Corydon Avenue is a popular venue for locals to unwind and meet up. During July and August, Fridays and Saturday nights become livelier with live concerts by a varied group of musicians.

About an hour’s drive from Winnipeg is the Mennonite Heritage Village, a 40-acre site that features a Russian Mennonite street village. This reconstruction of a 19th-century village replete with people in traditional attire is a step back in time. Regular demonstrations about bygone trades like the blacksmiths, plowing and an operational windmill are some of the highlights for visitors. The restaurant that is part of the property is also renowned for its good food.