Top 12 Things To Do In Genoa 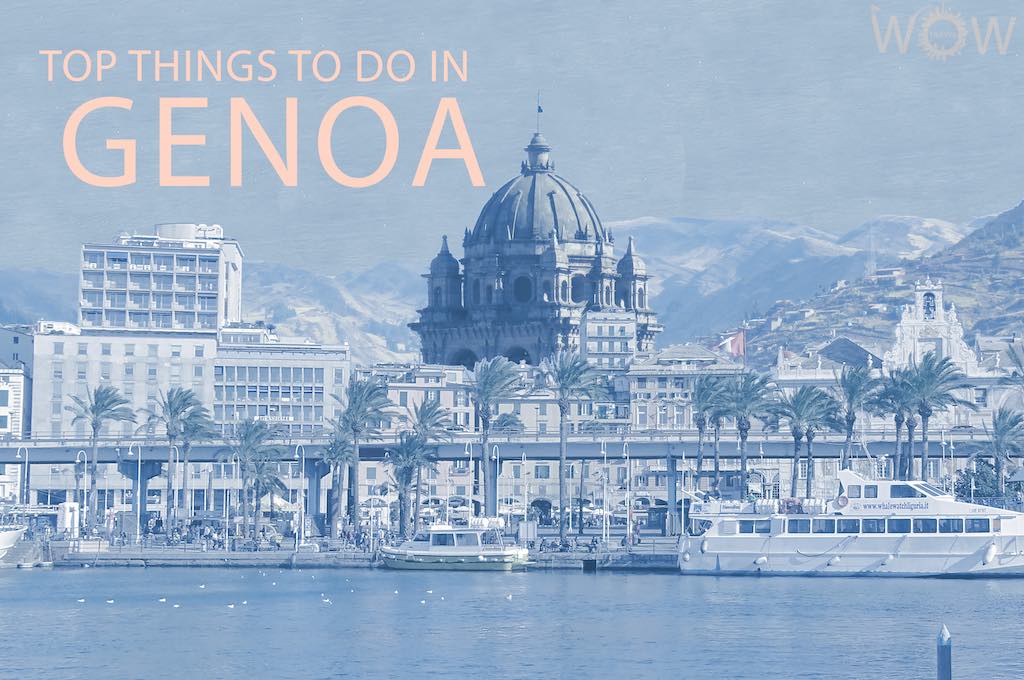 Italy’s leading port is a land of contradictions; its past grandeur sometimes shadowed by its dark side. Once a city of great wealth, the decayed glory of Genoa’s past is sometimes quite astonishing. Grand palaces are tucked away inside small and sometimes scruffy alleyways, surprising the unsuspecting visitor with their grandeur. Genoa was an autonomous region from the early 11th century until 1797 when it came under French rule. The establishment of trade routes along the Mediterranean brought much wealth and power to the city which is clearly visible in the number of palaces that the city has. However, the Genoese trading station of Caffa also wears the ‘dark’ hat of having brought the ‘Black Death’ to Europe through rats on its ships. Genoa today is a revitalized land with many of its beautiful historical landmarks restored, a crop of new fashionable shops and restaurants, and also a restored port with Italy’s biggest aquarium; reminding visitors why it once wore the sobriquet ‘La Superba,’ with such aplomb.

The Musei Di Strada Nueva consists of three former palaces, Palazzo Rosso, Palazzo Bianco and Palazzo Tursi. On a single ticket visitors can explore the interiors of these former palaces to marvel at the fine collection that they showcase; the city’s finest collection of the old masters. The three palaces are situated in one of the most renowned streets of Genoa – Via Garibaldi (formerly Strada Nuova). Planned by Galeazzo Alessi in the 16th century, this little street is flanked by palaces of Genoa’s wealthiest citizens. Even if museums don’t interest you, this street, a UNESCO World Heritage Site, is definitely worth a visit for the sheer magnificence of its structures.

The dramatic San Lorenzo Cathedral is hard to miss with its zebra-striped Gothic-Romanesque exterior. The Cathedral which was built between the 12th and 14th century was consecrated in 1118 by Pope Gelasius. Two bell towers and the dome were added in the 16th century. The Cathedral had a lucky escape in 1941 when a shell fired from the British battleship HMS Malaya landed in the southeastern corner of the nave but failed to detonate. The shell has been preserved to remind people of the Cathedral’s narrow escape. San Lorenzo is also home to some interesting relics of Christianity, which include the medieval Sacro Catino, supposed to be the Holy Grail and the quartz platter on which John the Baptist’s head was presented to Salome.

The bustling hub of Genoa is the Piazza De Ferrari, the main square of the city. Its restored iconic fountain is surrounded by some grand historic buildings. Numerous office buildings, private companies, and banks are housed in various complexes around the square, making this the financial district of Genoa. Genoa’s main shopping street Via XX Settembre can be easily accessed from here.

Although this might sound a bit macabre, one of the more outstanding places in Genoa is the Monumental Cemetery of Staglieno. The cemetery is one of Europe‘s largest cemeteries which spans an area of more than a square kilometer. Located on a hillside in the Staglieno district of Genoa, the cemetery was opened in 1851, seven years after work on its construction began. When the cemetery was built, Genoa was a major center of learning and attracted affluent citizens and many reformists. Wishing their works to be immortalized, a tradition of realistic funereal sculpture emerged around tombs in the cemetery.

Located outside Genoa’s 14th-century walls, the Christopher Columbus House is an 18th-century reconstruction of Columbus’ original home. Historical documents show that Christopher Columbus who was born in Genoa lived in this house between 1455 and 1470. The original house was probably destroyed in the French Bombardment of Genoa in 1684 and rebuilt on the basis of the original ruins. It currently houses a museum. Near the house, the two well-preserved towers Porta Soprana, that were built in 1155 can also be seen. These towers were part of a gate in the city walls.

Once a former fishing village, Boccadasse is now a major tourist attraction in Genoa. The popular Corso Italia promenade about 3km east of the city center leads to Boccadasse.  The tiny pebble beach is a favored destination especially in the evenings for its small bars. There are many restaurants in the vicinity where you can soak in the surroundings but they’re quite crowded on the weekends.

La Lanterna, Genoa’s main lighthouse has been standing tall at 76 meters since 1543 to guide maritime traffic. It is the second tallest ‘traditional’ lighthouse in the world and was once the tallest in the world until the ‘Ille Verge’ was constructed in France in 1902. The lighthouse is also the third oldest in the world after the Tower of Hercules in Spain and the Kopu Lighthouse in Estonia. La Lanterna has been struck by lightning several times and was also shelled in 1684 during the bombardment of Genoa by the French but continues to stand tall. Adjacent to the lighthouse is the Lanterna Museum which gives visitors a deeper insight into the history of the city and the port.

One of the most spectacular of all the palaces in Genoa is the Palazzo Reale located at Via Balbi. The palace was constructed for the Balbi family in the early 17th-century and later sold to the Durazzo family. In the early 19th century the palace was bought by the Royal House of Savoy. Grand staircases, exquisite furnishings, terraced gardens and a gilded Hall of Mirrors are just some of the attractions that make up this beautiful palace.

The old port of Genoa is a great place for an evening stroll. The once-powerful port has undergone a makeover of sorts to make way for some leisure activities that include a small public swimming pool and a pirate ship. Besides the popular aquarium, there is a futuristic lookout point too. There are plenty of restaurants and cafes that overlook the water where you can relax and ‘drool’ over the yachts and superyachts that are parked here.

The beautiful mural-covered Palace of St. George situated in Piazza Caricamento on Genoa’s waterfront was built in 1260 by the first Doge of Genoa. Materials from the demolished Venetian embassy in Constantinople (modern Turkey) were used for the construction. The palace was intended as a clear demarcation between the powerful clergy and the government. Six of Genoa’s most famous citizens, including Christopher Columbus, are depicted below St. George. Palazzo San Giorgio has played many different roles since its inception, from being the seat of power of Genoa to the headquarters of the world’s first bank and even a prison in which Marco Polo was held.

Overlooking the Castello district from its prominent position on a hilltop and flanked by the large Embriaci Tower is the beautiful Romanesque Basilica of Santa Maria di Castello. The church was erected before 900 AD and has numerous artworks that were commissioned by the noble families of Genoa. Works by famous artists such as Francesco Maria Schiaffino, Lorenzo Fasolo, Giuseppe Palmieri and others adorn the walls of the church. Some of its most notable frescoes date back to the 16th and 17th century.

Genoa’s vaunted aquarium in the old harbor area is the largest in Italy and ranked among the largest in Europe. The 3,100 square meter aquarium with more than 600 species of sea creatures, was built to commemorate the 500 year anniversary of Columbus’ discovery of the new world.  It’s a great place to visit with kids but it’s advisable to book tickets online to steer clear of the long queues. Not too far from the aquarium is the Biosphere, a giant glass ball that houses a mini tropical ecosystem with birds, butterflies, and tropical plants.