Top 12 Things To Do In Corsica 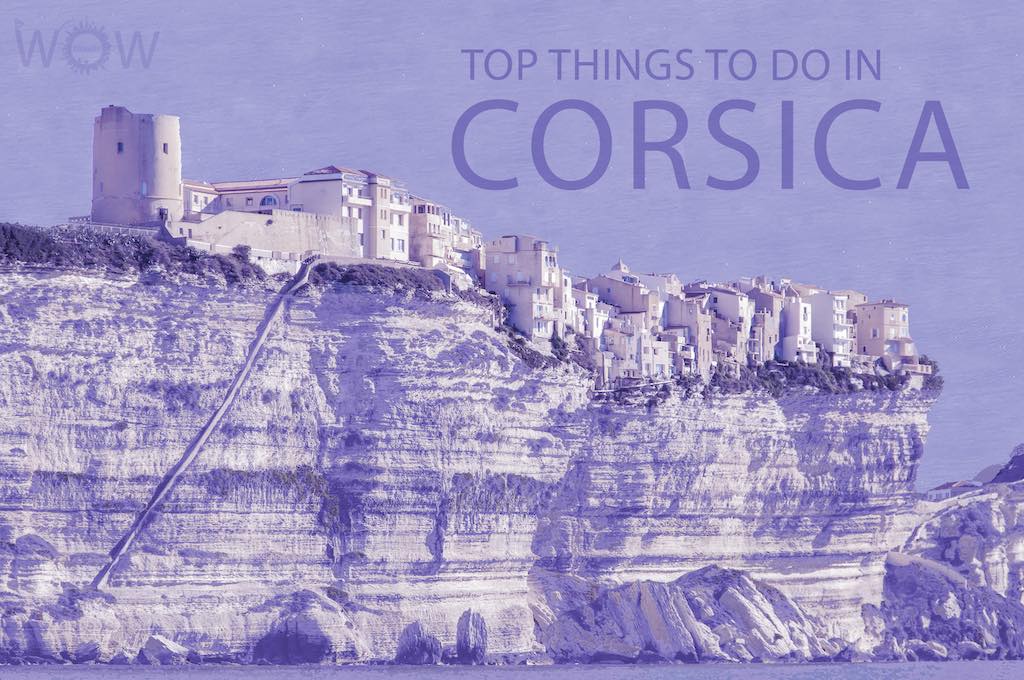 The island of Corsica lies like a mini-continent in the Mediterranean Sea. It is one of the 18 regions of France, located southeast of the French mainland. The topography of the region is so diverse and spectacular that the island has been aptly called the Island of Beauty (Ile de Beaute). From the rugged mountain ridges that rise so prominently from the sea to lush valleys, spectacular beaches, and picturesque villages, the stunning beauty of Corsica is quite incomparable. There is much to see and do in the region, like hiking the spectacular trails to scuba diving in the turquoise blue waters or exploring a historical town or city. The culture of the island is also quite unique to mainland France and one has to experience it first hand to understand why the island is so special.

The fortified commune of Bonifacio sits atop a steep limestone cliff within Corsica’s largest nature reserve the Reserve Naturelle des Bouches de Bonifacio. The city is divided into two sections the old town and the Upper city on the site of the citadel. Exploring the 9th-century citadel is an adventure in itself as you make your way through the haphazard medieval lanes towards the Romanesque 12th-13th-century Eglise Sainte-Marie-Majeure church located at the heart of town. Another notable church in the area is the Eglise Saint-Dominique de Bonifacio, the largest church on the island located within the walls of an old Dominican convent. Bonifacio is surrounded by some breathtaking locales and beautiful beaches which attract many during the summer.

Staircase of the King of Aragon, Bonifacio

The impressive Staircase of King of Aragon which cuts down the southern cliff face of Bonifacio is only accessible from the top. Legend has it that the 187 steps were carved overnight by Aragonese troops during the siege of 1420. Although it is an interesting story to believe, the actual fact is that the steps were probably carved into the side by Franciscan monks who needed to access the source of drinking water located in a cave below.

The Archipelago of Lavezzi, Bonifacio

The Archipelago of Lavezzi (Îles Lavezzi) is a protected group of a hundred or so uninhabited islets and reefs 10 km southeast of Bonifacio. It is a spectacular area to visit as the tranquil lapis-lazuli waters are not only great for swimming but a stunning area for photographs. The island of Lavezzi is the largest of the 7 main islands. Two cemeteries with remains of the victims of the shipwrecked French frigate Semillante are found on the island of Lavezzi.

Southeast of the town of Porto-Vecchio you’ll find the idyllic Palombaggia beach with an ever-changing sea. The sparkling tranquil waters are transformed from turquoise to blue and amethyst during the course of the day, making this the most visited beach in Corsica. The wide sandy shore stretching over 1.5 km, framed by pine trees offers some fantastic views of the Cerbicale islands, a nature reserve.

This prehistoric site which was discovered in 1946 by the owner of the land is located 20km north of Propriano. A track through an ancient olive plantation will take you to the excavated site of Filitosa which is surrounded by forested hills. The magnificent array of prehistoric granite menhirs and statues which were created around 6000 years are definitely worth the visit. Some of these were recarved to show detailed faces and weaponry about 2500 years later, during the Bronze Age.

The lively seaside town of Bastia is one of the most important ports on Corsica. You can get a real feel of what Corsica is all about when you visit Bastia. Three areas of the town – the old town (Terra Vecchia), the Citadel dating back to 1378, and the old harbor are of particular interest to visitors. There are several important churches within Terra Vecchia, the most prominent being the 17th century Eglise Saint Jean Baptiste, the largest church in Corsica overlooking the harbor.

The UNESCO-listed nature reserve is located within the Gulf of Porto to the southwest of Calvi. The remote mountainous peninsula that makes up the Reserve Naturelle de Scandola extends above and below the water and is only accessible by boat. The hidden coves and majestic red cliffs are surrounded by crystal clear turquoise waters.  You can have one of the best snorkeling or scuba diving experiences in Corsica at the reserve. Shuttle boats depart frequently from Calvi and a few from Porto. There are also organized tours that you can avail of to guide you through the area.

Calvi is a picture of perfection with the backdrop of snowcapped mountains juxtaposed with the beautiful sea. The sun-drenched marina and the long expanse of beautiful beaches are a huge draw for visitors to the region. Another attraction of Calvi is the ancient citadel with its narrow cobblestone streets, historic buildings, and pedestrian staircases. The huge citadel which was fortified by the Genoese rulers from the 12th century onwards was extremely successful in keeping invaders away. You can avail of some stunning views from its five bastions. The 13th-century Cathedral St-Jean Baptiste within the citadel is also a ‘must visit’ if you are in the area.

The birthplace of Napoleon Bonaparte and bustling capital of Corsica, lies on the west coast and offers some spectacular views of the sea. The citadel which dominates the headline of the old town is off-limits to visitors as it is still in use by the military. The old town is filled with picturesque pastel-painted houses along a maze of winding narrow streets. Place de Gaulle is at the center of Ajaccio. This grand square has an equestrian statue of Napoleon which was created in 1865. The birthplace of Napoleon, the Cathedral and the palace are some noteworthy places to visit in Ajaccio.

Cathedral of Our Lady of Assumption, Ajaccio

The Cathedral of Ajaccio is significant because it is supposedly the place where Napoleon was baptized in 1771. On his deathbed in Saint Helena, his last wish was to be buried with his ancestors in the Ajaccio Cathedral. The cathedral which is dedicated to the Virgin Mary is the ecclesiastical seat of the Bishop of Ajaccio. It was built between 1577 and 1593 in the style of the Counter-Reformation. The altar is a gift from Napoleon’s sister, Elisa Bonaparte. There are seven side chapels in the cathedral of which three are most prominent.

Cap Corse peninsula situated in the northeastern corner of Corsica is another beautiful part of the island that draws visitors. This 40km long and 10km wide promontory has a few medieval villages like the perched villages of Pino and Nonza and other pretty fishing villages around the coast. The Farinole beach is one of the main attractions on the Cap Corse popular with surfers as the undercurrent makes it unsafe for swimmers.

The distinctive landscape of this UNESCO-listed nature site located to the west of Corsica will leave you mesmerized, especially at sunset when they acquire a red hue. The weather carved rose-colored granite rocks are huge and rather strangely shaped, often plunging into the turquoise sea below. Some of the dramatic formations are as high as 300 meters above the sea. There are several hiking trails through the area with viewpoints.