Top 12 Things To Do In Girona 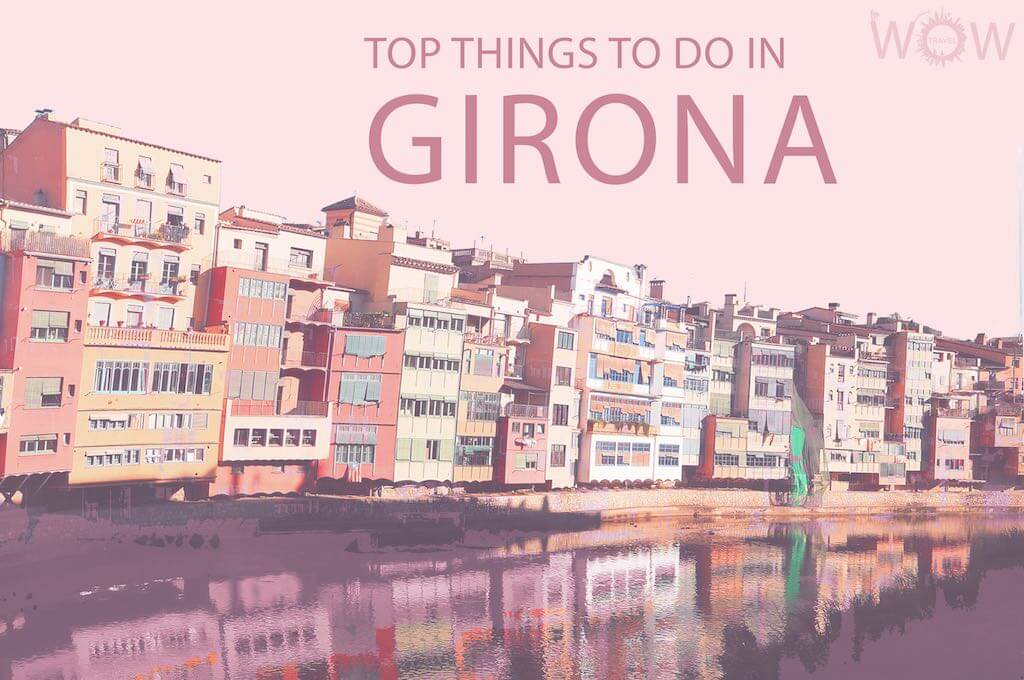 Less than a hundred kilometers from the northeast of Barcelona is the Catalan city of Girona. It is an ancient city, having originated during the time of the Iberians and later known as the Roman city of Gerunda. In the 12th century, the city had a flourishing Jewish community and had one of the most important Kabbalistic schools in Europe. Girona has been the target of numerous sieges throughout its history, having been occupied by the Moors and the French at different periods. In fact, Girona was captured seven times and besieged twenty-five times. During the 19th century, the French demolished the western walls of the city but the walls on the eastern side were untouched. Girona’s rich history is visible in the old town which is situated on the east of the River Onyar. The galleries, museums and cobbled lanes of the city are definitely worth exploring.
[booking_product_helper shortname=”girona”]

Girona’s imposing cathedral dedicated to Saint Mary towers over a flight of 86 steps. It is built over an ancient cathedral which was once used as a mosque by the Moors. The cathedral’s Catalan Gothic architecture is one of the most important monuments of the Majorcan architect Jaume Fabre. Since the cathedral was built over five centuries it has a mix of styles Romanesque, Gothic and Baroque. The tower, the cloister and the sacristy are remnants of the Romanesque style. The interior has the world’s second widest Gothic nave, after St. Peter’s in the Vatican. The sculptural wealth of the cloister with richly carved fantastical beasts and biblical scenes in the southern gallery, and the 14th-century silver altarpiece depicting scenes of Christ’s life studded with gemstones are just some of the attractions of this beautiful cathedral. The French carried off a gold and silver altar-frontal in the early 19th century.

Although this may not be as expansive as the other attractions in Girona (It hardly takes 15 minutes to explore), the well preserved Banys Arabs are definitely worth a visit. The 12th-century Romanesque baths which are modeled on a mix of Roman and Arab baths has four rooms – the changing room with a small octagonal pool in the center, the sauna and the hot and cold rooms. The building was used as a public bath until the 14th century and also temporarily used as a mikveh by the city’s Jewish community. In the 17th century, the building was bought by a community of Capuchin nuns and was subsequently converted into part of their convent. The baths became a subject of great interest to travelers in the 18th century, whose drawings of the structure, exposed the baths to the world. The baths were finally bought by the Girona Provincial Council in 1929 and restored. They were reopened to the public in 1932.

The old fortifications of Girona are a great place for a leisurely stroll to gain some great views of the city and its surroundings. The medieval walls have played a vital role in the defense of Girona from invaders. Having withstood several attacks, the western part of the wall was finally demolished by the French to expand the city. Visitors can access the walls from different points in the old town but the most popular access is opposite Banys Arabs. The Torre de Sant Domenec is a great lookout point.

The Monastery of San Daniel was founded in the early 11th century by the decree of countess Ermesinde of Carcassonne who wanted a nunnery to be built in the area. The imposing monastery with its 13th-century Romanesque lower floor and Gothic 15th-century-second floor are worth exploring. The sepulchre of St. Daniel which dates back to 1345, was brought here from Arles in France.   The Benedictine community of seven nuns who reside at the monastery follow an open code monastic life and have thus opened their doors to guests. The recently renovated residence quarters with single and twin bedrooms provide beautiful views of the surrounding valley and the monastery gardens.

The main hub of Girona is the Independence Square, located just a few steps to the west of the Onyar river. The square which is named after the War of Spanish Independence against Napolean Bonaparte is a great place to soak in the local vibe. One of the busiest places in Girona, with its numerous cafes and restaurants, has an impressive 19th-century style despite being surrounded by austere neoclassical buildings. The monument at the center of the square is dedicated to the defenders of the city during the sieges of 1808 to 1809.

This Gothic-style landmark was founded in 1253 by Bishop Berenguer of Castellbisbal and was one of the first buildings of this style in Catalonia. The Convent of Sant Domenec is a significant model of the mendicant order in Catalonia. In 1822, the convent was converted into military barracks and was used until 1945. Since the year 2000, the convent is now the base for the Arts Faculty of the University of Girona.

The old Jewish Quarter located within the great Roman fortress, Forca Vella is a site frozen in time with its maze of cobbled streets, archways, stairs, and patios. It is one of the best-preserved Jewish Quarters in the world and a great place to learn about Girona’s Jewish heritage. The Museum of Jewish History which is housed in an old synagogue gives visitors an insight into the culture of the Jews in Girona before their expulsion in 1492. Narrow streets with steep stone steps and big stone windows are characteristic of the El Call and feel like a step back in time. Streets in the area worth exploring are Carrer de Sant Llorenc and Carrer Manuel Cundaro.

Girona’s second most iconic landmark with its truncated bell tower is the Church of St. Felix (Sant Feliu) located downhill from the Cathedral. Prior to the construction of the present cathedral, Basilica de Sant Feliu served as Girona’s first cathedral. The church which was built over a long period of time also has a mix of styles, relevant to the time of its construction. The slender bell tower with its castle-like appearance was constructed between the 14th-16th centuries and the Gothic nave, baroque facade and Romanesque chevet were completed between the 13th-18th centuries. Some remarkable works of art can be found inside the church as well as early Christian sarcophagi dating back to the 4th century.

The main lung of the city is a space dedicated to recreation where hundreds of trees can be found. Some of the trees are over a century old, most of which were planted in 1850. The expansive Le Devesa Park covering over 40 hectares of land is a great place to visit if you’re a nature lover. However, the park is not solely for naturalists. Located within the park are shooting ranges, a football pitch, the Girona Auditorium, and the Congress center. The park is a great place to spend some quiet time. A Tuesday and Saturday Street Market selling fresh produce is also held in the park.

One of the most important Romanesque monuments in Girona is the Benedictine monastery of Sant Pere de Galligants. The 12th-century monastery was built within the city, which is rather unusual as most monasteries were built in isolated places. Architectural buffs will appreciate the uniqueness of the complicated asymmetrical form of the chancel as well as the perfectly symmetrical eight-sided bell tower. However, Sant Pere de Galligants stands out for the sculpture that is found on the capitals of the main nave and the chancel. The monastery was converted into a museum of archaeology and fine arts in 1857, which makes it one of the oldest museums in Catalonia.

The Museum of Cinema which opened in 1998, was the first of its kind in Spain. Created from the exceptional collection of Tomas Mallol, the interactive museum is a wonderful way to discover the origin and world of films. 10 different sections will take you through this journey of discovery, including an audiovisual which serves as a prologue to the permanent exhibition. Several optical illusions, magic lanterns, cameras, and other gadgets used in cinema provide visitors with a deeper insight into the fascinating world of films.

One of the most famous houses and important works of architecture on the Onyar River which is open to the public, is the birthplace of the great Catalan architect, Rafael Maso i Valenti. The house was built after merging four separate dwellings between the mid 19th century and early 20th century. Maso then carried out some renovations between 1911 and 1919 to give the house its present facade. The glassed-in galleries of the house provide a special view of the River Onyar and its bridges. The house is decorated in the Noucentisme style with furniture of the era.