Top 12 Things To Do In Kampala 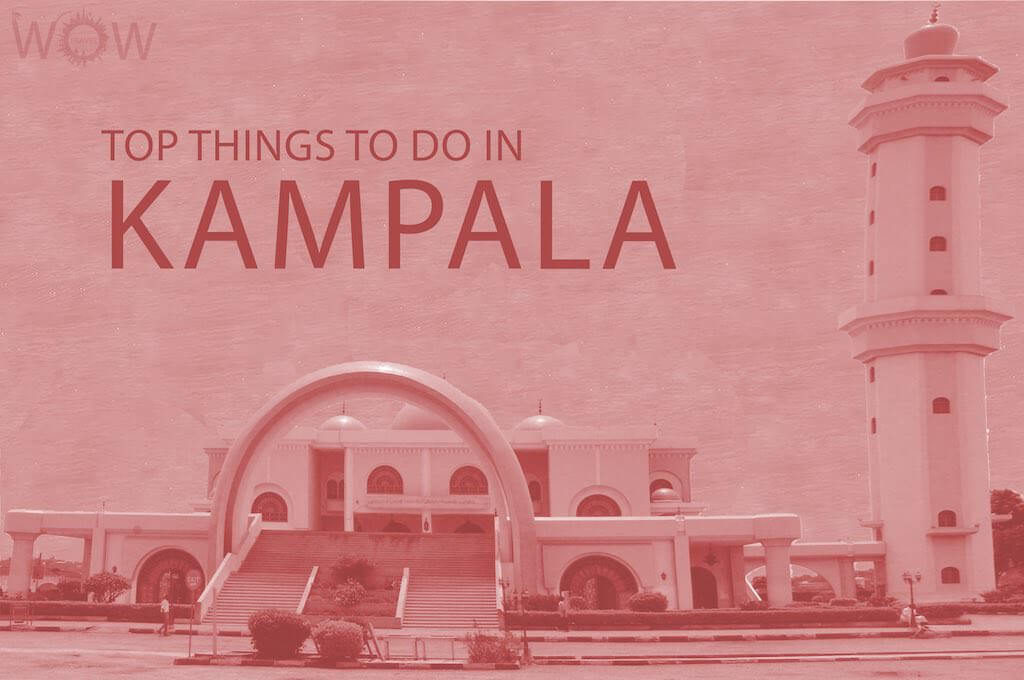 One of the fastest-growing cities in the world, Kampala presents a serene landscape. It is the capital of Uganda, located in eastern Africa on the banks of the Largest Lake of Africa, Lake Victoria. The urban Kampala is embroidered with hills, red-tiled villas, and greenery in the backdrop. At the heart of this landscape rise the modern skyscrapers with pride. Acknowledged as the best city to live in eastern Africa, Kampala has loads to offer to its visitors. From beaches to serene lakes, wildlife safaris to heritage sites, historical buildings to modern markets-Kampala have all in store for a worthy vacation!
[booking_product_helper shortname=”kampala”]

It is a statutory body established under the government parliament act. The mandate is to patronize, radiate and encourage cultural as well as art activities in Uganda. Located at the heart of the city of Kampala, the center has two main bodies viz. the National Theatre and the Nommo Gallery. The National Theatre is responsible for organizing and hosting various stage events besides a cinema hall. The Nommo Gallery, on the other hand, houses art and craft exhibitions and is a center of eclectic art. The center also has a snack bar with cheap and tasty dishes. A craft village showcasing traditional handicrafts also forms an eminent part of the center.

These are the most unique tomb structure in the world made of purely vegetal materials and thick thatched roofs that will certainly attract tourists. Located on the Kasubi Hills, these are the tombs of the four Kabakas (Kings) of the Baganda Royal family. The tombs are the place for the spiritual and political interests of the indigenous people. UNESCO declared it as a World Heritage site due to its immense structural and social significance.

It is certainly a tourist hotspot owing to the variety of attractive authentic African crafts and accessories. From Kitengi dress, Kikuyu bag, African sandals, tribal bangles, earrings, and other unique African jewelry to cow horn saucers, wooden mortars, wooden African masks and so on, the market is an all in one authentic African shopper stop. Located at the heart of the Kampala city, this place has some souvenirs or the other in store for a visitor of all economic strata.

Unlike most National museums, Uganda National museum has different antique and unkempt attire. Although a bit dusty and unorganized, this place will certainly take you to a time travel to the colonial era with its eclectic admixture of art, geology, anthropology and interesting dioramas. Reconstructed on a thatched house structure, the museum is unique in its kind. A visitor might check his musical acumen by playing on the big traditional drums. There is a big xylophone as well. One can also buy souvenirs from the gift shops.

It is a strikingly beautiful lake located 5 km downtown to Kampala city center. It is the largest man-made lake in Uganda. It was built under the reign of Kabaka Mwanga 11 of the Baganda clan. Although the objective was to build a channel, wide enough for the king to sail to Lake Victoria for water sports and other activities besides visiting his second palace near the Lake Victoria, the digging was halted to religious war. The lake is rain-fed and the level of water is maintained all the year-round, with beautiful islands in the middle. The picturesque will certainly call for a tourist halt.

The Wandegeya is an all-inclusive market place adjacent to the Kambala city. One will get farm-fresh veggies and fruits here. Besides raw food items, the market place includes exclusive showrooms of international brands. Small and budget eateries are available which will quench a visitor’s inquisitiveness on local fast food. The Wandegeya mosque is nearby, which draws more visitors here.

The unicameral Parliament of Uganda is the seat of the country’s legislative policymakers. Established in 1972, the current 10th parliamentary governance looks good in terms of the social, political and inclusive developmental ventures. The parliament is located in the heart of the city. Although most parts are not accessible to visitors, the place still got tourist significance due to its supreme stature in the socio-economic framework of the country.

It is organized by the Prime Uganda Safaris and tours to give an explicit glimpse of the pearl city of Uganda. The tour comprises of a visit to Kampala’s heritage sites, historical monuments, administrative buildings, archaeological sites, markets, and economic centers, religious places, academic centers and hence gives an abstract to the life, culture, and heritage to the colonial and modern Kampala city.

It is also known as Sir Edward Mutesa Monument. The monument is dedicated to the man behind the independence of Uganda against the British colonial rule. He was the 35th Kabaka (king) and the first president of independent Uganda. It marks the Independence of the state and hence is highly significant as a tourist destination. It is located at the Nile avenue junction and next to the famous Independence monument.

It is the parliamentary house of the Buganda Kingdom. Kabaka of the kingdom has his office and the royal court at this place. It is located on the Namirembe Hills, adjacent to Kampala. Originally a thatched house, the building was reconstructed into a brick structure by an Indian architect under the order of the contemporary Kabaka. It was further reconstructed in Scottish architecture by the conception of Kabaka Muteesa II during the late twentieth century. The building is a tourist halt owing to its architecture and historical significance.

It is a hallmark monument that marks the independence of Uganda from British Colonial oppressors. Constructed in the 1960s, the monument is iconic in terms of its unique structure with symbolic attributes. It’s a woman lifting a newborn with a raised hand like the triumphant of jubilation. The woman here signifies independent Uganda. The monument is located in the heart of Kampala alongside Sheraton hotel. The importance of this monument is acknowledged from its image in the official currency notes of Uganda.

It’s a serene place to pray that welcomes people from all religions. Baha’I Faith descends from Abrahamic religions like Christianity, Islam and Judaism. The place will impress a visitor with its pristine look, silence, peace and tranquility and the fusion of all religious beliefs. The design of the temple is inspired by the Arabian-Persian forms. If a tourist is inclined towards religions, the temple is a must-visit!