Top 12 Things To Do In Lubeck 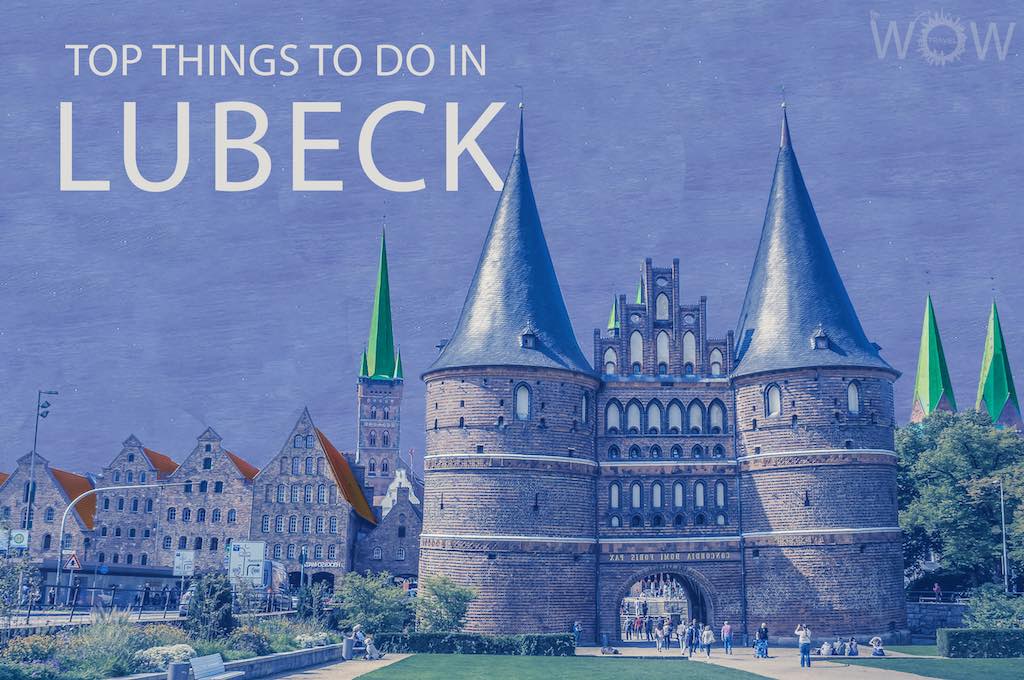 Lubeck, a historical city known for its rich heritage, is located in Northern Germany. It gives an insight into Old World Germany and is positioned near the Baltic Coast. Due to its status, its nickname during the 14th century was “The Queen of the Hanseatic League.” There are several cultural spots that offer tourists a fine sightseeing experience. Let’s have a look at what interesting things you can do in this vibrant city of Germany.
[booking_product_helper shortname="lubeck"]

A typical Gothic-style city gate structure, it is one of the prime landmarks of Lubeck. During the 14th century, this city had four gates and now only two survive and the Holsten Gate is one of them. It played a major role in protecting Lubeck from invaders. On the western side of this gate, you will see an inscription in Latin ‘Concordia domi foris pax,’ which means ‘harmony at home and peace abroad.’ There is also a nice little museum, about local history, situated inside the gate.

Lubeck City Hall is called Rathaus, which is famous for its dark brick façade. Its rich exterior decoration will leave you astonished. Built in the 13th century, it is still one of the most beautiful town halls in Northern Germany. Placed near the old market, it is flanked by Gothic style arcades. Its interior is worth seeing. Do not miss the Audience Hall. You will be left amazed by its décor and its architectural transition between the late Baroque and the Rococo style.

In English, it means the hospital of the Holy Spirit. Erected in the 12th century, it is one of the best maintained medieval buildings. If seen from above, you will see that the building has been constructed in the shape of the letter ‘T’. A large section of this social institution had small living compartments that were used by infirm and elderly. It was operational until 1960.

Translated as salt storehouses, these are six sturdy historic buildings located on the Trave River. Made of brick, each building has its own unique essence. They give an insight into the fluctuating trends in the renaissance gabled architecture. In medieval times, salt coming from Luneburg was stored in these houses before being shipped off to different locations. Currently, the building is used as a textile depot.

The city of Lubeck is blessed with several gorgeous churches. St. Mary’s Church is one of them. Completed in the 13th century, it is the third-largest church of Germany. It certainly gives an idea about the power of citizens at that time. A twin-towered building, it still stands tall and gives a solid impression of Brick Gothic church. Its interior is also amazing. The arched interior has multiple side chapels, intricate carvings, and stained windows. Truly mesmerizing experience!

How can you miss this tiny, but interesting place while touring Lubeck. Willy Brandt was the chancellor of West Germany and he was awarded a Nobel Prize in 1971, for his untiring efforts for reaching a consensus to merge West Germany with East Germany. He was a favorite and most famous resident of West Germany. His house is now converted into a museum that gives an account of the events of the Cold War era and the political career of Willy Brandt.

Dom (Lubeck Cathedral) is the oldest building of Lubeck city. It was built in the 11th century. Originally a Romanesque church, it was renovated and converted into a gothic style church during the 14th century. This ancient building suffered heavy damage during World War 2. It took nearly 40 years to renovate the cathedral. There is a valuable sculpture called ‘Holy Mary Mother of God’ and another one ‘Beautiful Madonna’ placed inside the cathedral. Apart from these sculptures you also need to see the imposing clock, the giant resplendent organ, and the hypnotic ‘Triumphal Cross’ entirely made from an oak tree.

For all the literature buffs out there, it is a must-visit the place. This appealing white Rocco house from the 17th century has a recessed doorway and a gabled roof. Heinrich and Thomas Mann were two very famous writers, who used the building during the eighteenth century. Thomas wrote his popular novel ‘Buddenbrooks’ in this building. Currently converted into a museum, it has been designed specially to provide an insight into this novel.

Read as ‘the house of the seamen’s guild’, it is one of the most striking guild houses right from the Hanseatic era. Constructed during the fifteenth century, in renaissance style, it has high gothic windows and stepped gables. The interior is made of paneled wood, brass fittings, and rough wooden furniture. It has now been converted into a fine restaurant.

Built in the 11th century, St. Peters Church is another medieval church. It was renovated during the 19th century after standing in a state of ruin for a long time. From the observations platform, built on a height of 50 meters, you can have a nice panorama of Lubeck. If you are lucky enough and there are no clouds, you can even see the Baltic area.

Looking forward to spending a good day? Then you need to explore the courtyards and passages of the Old town area. There are a few streets that you should not miss like Engelsgrube, Engelswisch, Fuchtingshof, and Glandorpshof. In medieval times they were living quarters of artisans and tradesmen. These courtyards are tiny idyllic pearls having low timbered houses decorated with vibrant flower arrangements. You can take some breathtaking photographs in these passages.

Opened recently, it has emerged as one of the most visited places of Lubeck by tourists. This museum is especially dedicated to Hanseatic League, as the developers have done an amazing job. Objects belonging to that era have been displayed in a high tech manner. It makes it easier for the visitors to learn about this amazing ancient group of travelers, who later developed an influential mercantile alliance.