15 Small Towns In Germany Worth Visiting 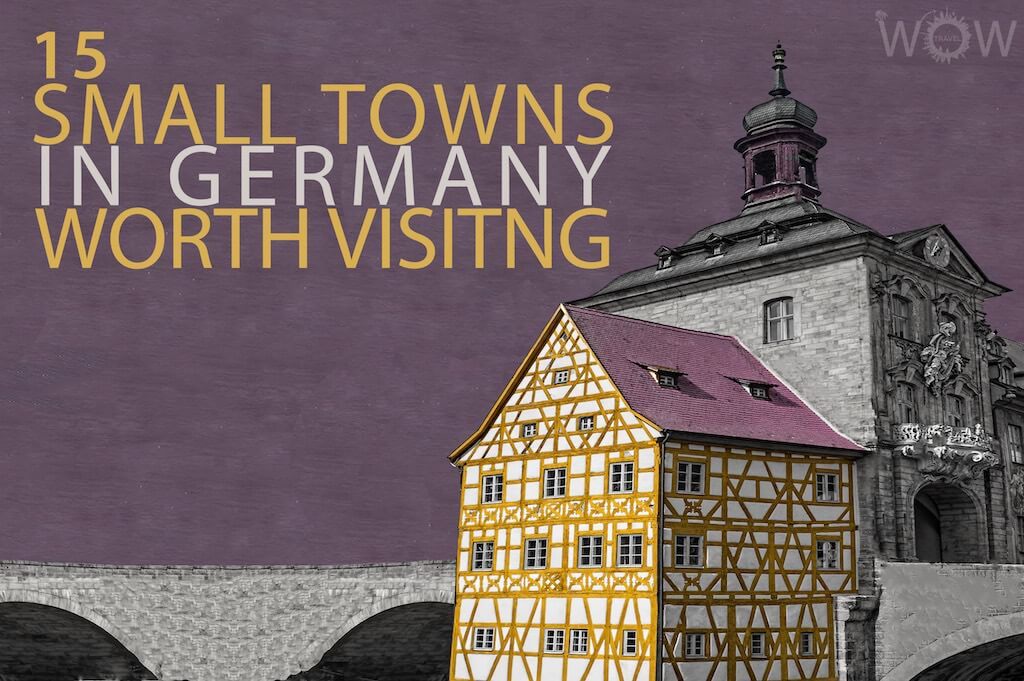 Germany’s largest cities like Berlin, Munich, Hamburg, Cologne, and Frankfurt are different in unexpected ways, each with their own ‘personality’ shining through. But this time we decided to dive deeper into the German hinterland to find some of its undiscovered gems. Between the dense forests, the fertile valleys and the stunning splendor of the Alps, Germany boasts some of the most colorful, charming and singular medieval small towns in Europe. Here is our pick of the 15 Small Towns In Germany Worth Visiting.

Founded in 922, Goslar is a historic town located in the north-western foothills of the Harz in Lower Saxony. It looks back onto a long history as it was an imperial city for nearly 250 years during the mid ages and was one of the most important seats of power in the Holy Roman Empire. Mining plays a significant role in the development of the town, the Rammelsberg mine was the major source of copper for Europe during the Middle Ages and zinc, lead, gold and silver were mined. Nowadays the town has many interesting sites to visit such as the Imperial Palace, the Town Hall and a well-preserved historic center with beautifully-carved, half-timbered houses (Goslar has the largest number of old houses in Germany, 1800 of them).

Garmisch and Partenkirchen were once two separate market towns and both offer charming historical centers, a wealth of culture and plenty of good old-fashioned Bavarian hospitality amid scenic surroundings with sky-high mountains, deep gorges and wildflower field. Garmisch-Partenkirchen is both a world-class ski resort and a summer vacation playground. During the summer it becomes a top destination for hikers, mountain climbers, cyclists, spa aficionados, folklore enthusiasts, and high-altitude sunseekers.

Wernigerode is not only famous for its peculiar architecture – the town hall of Wernigerode is one of Germany’s most important landmarks – but also for its dark history of witches. Back in the day, Wernigerode used to be a center for many followers of the black arts. Things have calmed down over the last few centuries, obviously, so there’s no need to worry. The gorgeous medieval castle of Wernigerode offers an amazing view over the idyllic-looking town. Source: therussianabroad

Bad Wimpfen is an exquisite Middle Age town along the river Neckar, across from the mouth of the river Jagst, in the German countryside. it was left mainly intact during the first and the second world wars and thus, still full of lovely medieval-looking wooden houses called Fachwerkhäuser, which is one of the most easily recognizable architectural styles.

Left unscathed after World War II, Monschau is a small resort town in the Eifel mountain range. Amidst the medieval town layout, with the stream Rur snaking through it, slate-clad houses dominate, and timber-framed buildings with cafés, restaurants, souvenir shops, and hotels. What makes its charm are its narrow streets lined with half-timbered houses. Don’t miss the watermill near the Markt Market Square.

Bamberg is a picturesque town and a UNESCO World Heritage town in northern Bavaria, on the Regnitz river and the Main-Danube channel. It was built on seven hills, each hill is crowned with a church or a castle. Some buildings in Bamberg date back to the very beginning of the 12th century, like the castle Altenburg. Make sure to visit the Old Town Hall, perhaps the most remarkable building in town.

Freudenberg is a small medieval town situated in the German province of North Rhine-Westphalia. The old part of the town called “Alter Flecken” consists entirely of 86 half-timbered houses and It was built on the instructions of the then local ruler, Prince John Maurice of Nassau in the 17th century after a town fire and is almost unchanged since then. Alter Flecken district is recognized as a “Building monument of international importance”.

Situated on the Elbe River, Meissen is a picturesque town, northwest of Dresden. It was shaped by its ancient cityscape including the impressive castle on the mountaintop, noble china production, and the vineyard landscape of the Elbe valley. Meissen castle (1471) is one of the finest secular buildings in the Flamboyant Gothic style. Between 1710 and 1865 it housed the National Porcelain Factory.

Dinkelsbühl is one of the only remaining walled medieval towns in Germany. The city’s Old Town is compact with elegant timbered buildings, but it offers its visitors a strong picture of how the towns appeared in the Middle Ages with its Immaculately well-preserved, walled village, surrounded by gardens and water and sixteen towers.

Dating from the 9th century, the historic town of Lindau is actually an island full of medieval and half-timbered buildings. Located on the eastern side of Lake Constance, a freshwater lake, it is connected to the mainland by two bridges. This former free imperial town of the Holy Roman Empire is like a fantasy of what a charming Bavarian lakeside village should look like. Lindau was the site of a Roman camp, Tiberii, and of a Benedictine abbey founded in 810. Fortified in the 12th century, it became a free imperial city in 1275 and was a prosperous merchant town along the trade route from Italy.

Rüdesheim is a historic little town, nestled in the Rhein Gorge. It is known for being a winemaking town. The UNESCO World Heritage town, dating from the Middle Ages, and parts of the city’s fortifications like the Adlerturm (eagle tower) are well preserved. Here you will find cozy traditional wine taverns in historic half-timbered houses and a stroll through the vineyards to the Germania monument or to the Ehrenfels castle ruins will provide you with fantastic views of the Rhine Valley.

Mittenwald is a market town nestled on the border with Austria, this town is shadowed by the beautiful Alps and is a great jumping-off point for skiing or hiking. The Austrian ski resort of Seefeld is just 15 minutes drive away.

Cochem is a small traditional town with half-timbered houses and an exceptionally scenic location on the Mosel river in Rhineland-Palatinate. The town of Cochem is especially lively during the wine festivals in June and late August, but the most compelling attraction is the romantic Cochem Castle (1051), perched on a steep elevation dominating the town. It was used mainly as a defensive structure, and at one time, it housed as many as 40,000 knights. Over the history the castle would be the center of succession disputes, occupation, and wars.

The best-preserved medieval town in Germany, Rothenburg ob der Tauber fits the word romantic perfectly. Artists have long taken inspiration from the unique location of this medieval town whose skyline with its 42 gates and towers is quite unmistakable. Nestling amidst beautiful, unspoiled countryside and still with a largely intact walkable town wall with medieval fortifications surrounding the historic center, Rothenburg with its winding alleyways and artistic treasures is the ideal place to relax.

Situated just north of the Harz mountains, Quedlinburg is one of the most well-preserved medieval and renaissance towns in the whole world. It has a maze of cobblestone streets with more than 1300 half-timbered houses peering over them, and a church perched high on a hill. It features a rare combination of ancient and modern historical treasures and in 1992 it was placed on the UNESCO World Heritage list. The more than a thousand-year-old Collegiate Church of St. Servatius is the burial site of the first German king, Henry the Fowler, and home to one of Germany’s foremost collections of ecclesiastical treasure.