Top 10 Things To Do In Frankfurt 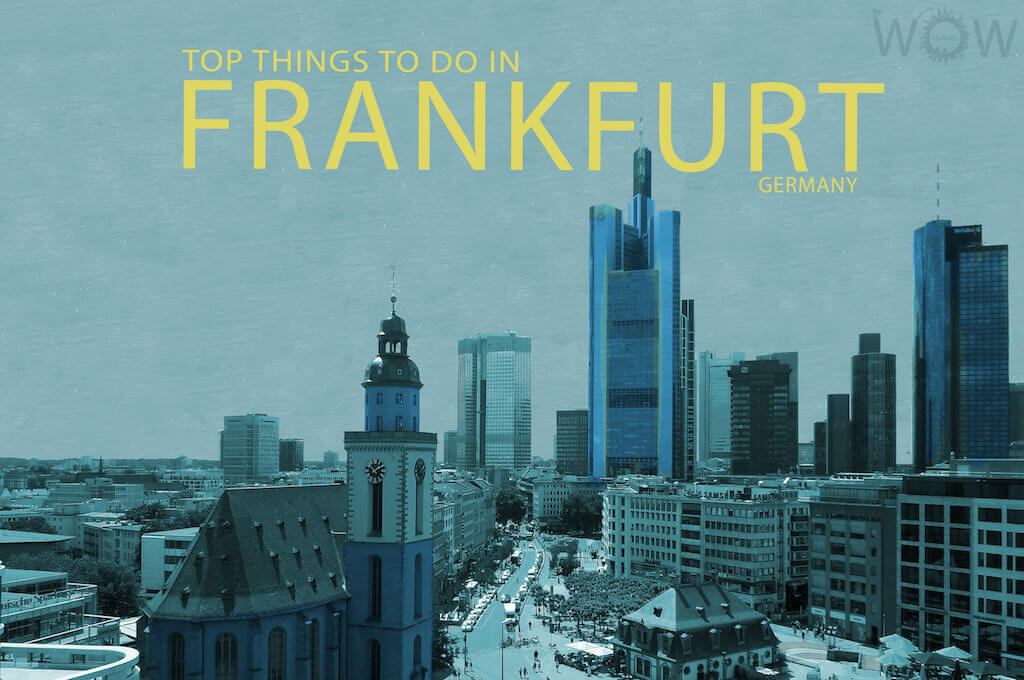 Frankfurt, the 5th largest city in Germany (after Berlin, Hamburg, Munich and Cologne) is one of Germany’s oldest cities. It is both enticingly modern yet vibrant with history and culture. Frankfurt may be best known as the business and finance capital of Germany filled with towering skyscrapers, but it is also one of the most desirable cities to live in and visit. Check out our Top 10 Things To Do In Frankfurt and discover historic buildings, a rich collection of museums and much more.

St. Paul’s Church opened as a Protestant church in 1789 and was consecrated in 1833 as the main Evangelical Lutheran Church. It is a symbol of the German democratic movement. The building was once home to Germany’s first National Assembly, the first freely elected parliament of Germany. Visitors can explore the history of German democracy at the church’s permanent exhibit.

Goethe House is where the known poet Goethe was born in 1749. In this house wrote his first publicly recognized novel The Sorrows of Young Werther.

This resplendent 12th century square in Frankfurt’s Old Town has been the place of celebrations and executions, festivals and fairs the High Middle Ages. Here you will find the Römer, Frankfurt’s city hall since 1405. Despite being over 600 years old, the city government still uses it on a regular basis. Don’t miss the Frankfurt Christmas market at the Römerberg that taking place every December.

Höchst is one of the most interesting and oldest of Frankfurt’s’ neighborhoods. Once a small town with a palace and defensive walls, it was annexed onto Frankfurt in 1928. First mentioned in 790, it received town privileges from Emperor Charles the IV in 1355 as well as permission to hold a market every Tuesday. Today, the market still takes place but on Tuesday, Friday and Saturday mornings. Near the market area is the St. Justinus Church, one of Germanys’ oldest churches. Another beautiful church to visit in Höchst, is St. Josephs. Built-in 1909, it is a stunning example of Art Nouveau design and decoration. Höchst has 2 palaces and a well-preserved Old Town section as well, filled with half-timbered (fachwerk) houses built in the 1500’s. Source: frankfurt-on-foot-cityguide.blogspot

Frankfurt Cathedral was built during the 14th and 15th century on the ruins of a small chapel. Guests will enjoy the magnificent work of the gothic altars, gravestones, as well as the artwork, displayed. The tower was the highest building in Frankfurt for more than 500 years. Visitors can climb the 325 stairs to the top and enjoy the views.

Book tickets for a performance at the Old Opera, nowadays a concert hall and former opera house. In March 1944 the authentic opera house was heavily damaged during World War II and reopened in 1981 after being rebuilt and renovated.

Frankfurt has many neighborhoods that used to be little towns of their own. The Sachsenhausen neighborhood on the south side of the Main River is one of them. The old part of Sachsenhausen is particularly charming and is full of great restaurants, bars, and cafes. It is a quaint entertainment district in Frankfurt and the best place to sample its specialty, apple wine.

Ranked as the 4th tallest building in Frankfurt, this 56-story, 200 meters (656-ft) tall skyscraper is the only high-rise with a public viewing observatory in the city.

Palmengarten is the largest botanical garden in Germany overflowing with a diverse collection of more than 13,000 different flora species. It features many greenhouses that also contain numerous tropical and subtropical plants.

The Frankfurt Stock Exchange ranks among the most important stock markets in the world. Due to the importance of Frankfurt for its range of financial services and banking in Germany, the exchange in Frankfurt is most often looked upon as a barometer of how well the German economy is going, measured by the all-important DAX. Free tours in English are available to let visitors discover how trade has evolved since the 9th century. Two bronze statues of a bull and a bear stand outside, symbolizing the ups and downs of the stock market.