Top 6 Things To Do In Goslar 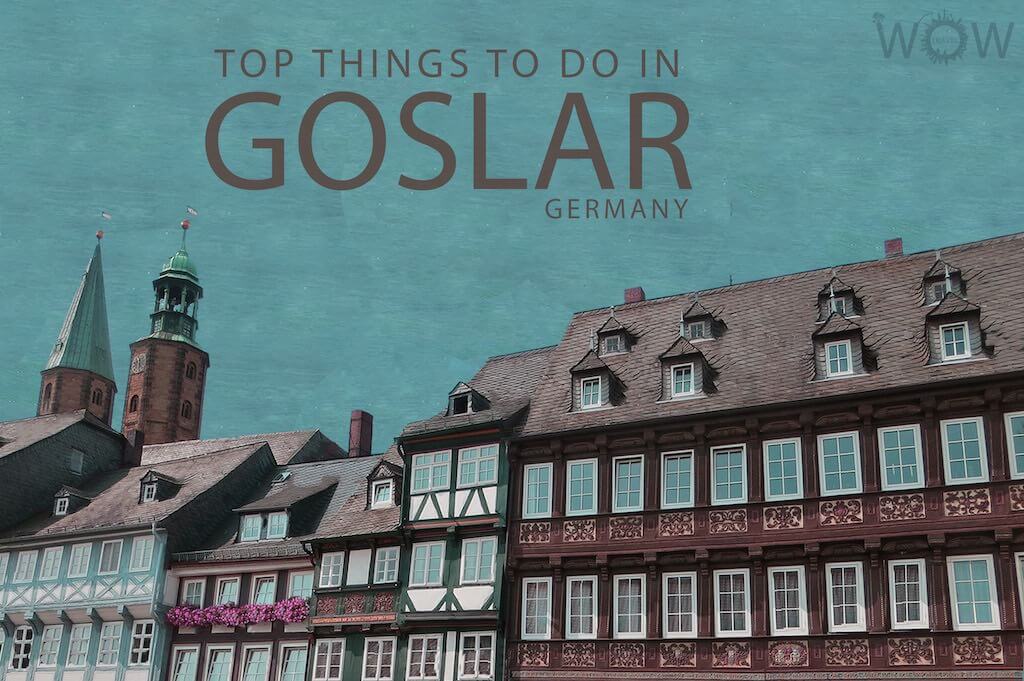 Founded in 922, Goslar is a historic town located in the north-western foothills of the Harz in Lower Saxony, Germany. It looks back onto a long history as it was an imperial city for nearly 250 years during the mid ages and was one of the most important seats of power in the Holy Roman Empire. Mining plays a significant role in the development of the town, the Rammelsberg mine was the major source of copper for Europe during the Middle Ages and zinc, lead, gold and silver were mined. Nowadays the town has many interesting sites to visit such as the Imperial Palace, the Town Hall and a well-preserved historic center with beautifully-carved, half-timbered houses (Goslar has the largest number of old houses in Germany, 1800 of them). Check out our list of the Top 6 Things To Do In Goslar.

Built between 1040 and 1050 during the reign of Heinrich III, the Imperial Palace is a unique secular architecture monument and a Romanesque masterpiece. It is the symbol of Goslar and has one of the largest halls from the Middle Ages. For more than 200 years German and European history was made here at numerous empire convocations and court gatherings. The Imperial Palace, a unique monument to secular architecture, is a must for every visitor of Goslar.

The old town of Goslar, which is still largely surrounded by former defensives and green spaces, is one of the most important closed-preserved historical cities in the world. The medieval old town of Goslar and its imperial palace were inscribed in the UNESCO World Heritage List in 1992.

Ore Mine of Rammelsberg

The ore mines of the Rammelsberg are the only mines in the world which were in uninterrupted operation for over 1000 years. The UNESCO World Heritage Rammelsberg, with its numerous minerals, offers matchless discoveries above and underground. Its uniqueness lies in its long history of mining and metal production. A variety of metals were discovered here over time, including copper, zinc, lead, silver and gold. The various mining facilities can be visited either on foot or using the mine’s railway.

A first impression of the unique medieval architecture in Goslar will be found on the market square. The market fountain, crowned by the symbol of Goslar, the eagle, forms the center of the square, surrounded by imposing buildings, such as the Kaiserworth and the Town Hall. The Chamber of Homage in the Town Hall is presented as a multi-media experience of the former late Gothic council chamber with unique ceiling and wall paintings.

Many interesting events are held in Goslar every year. The Imperial Market in October takes you on a time trip back to the middle ages. Particularly popular is also the Artisans’ Market in August where around 150 artisans display their creative work. The Old Town Festival in September offers live music on numerous stages in the old city center. In winter visitors can enjoy the Christmas Market with the Christmas Forest. Romantically framed by the background of the market square 80 lovingly decorated wooden huts invite you to stroll around and give yourself a delicious treat. In the fairy-tale Christmas Forest right in the historic city center, in an ensemble of 50 tall, illuminated pine trees on pleasantly fragrant forestly ground.

In the Middle Ages, Goslar was a centre of faith with 47 churches, monasteries and chapels. Five large churches still remain and you should visit some of them. The Marktkirche (Market Church), first mentioned in 1151, was built as a smaller version of the Imperial Church–which no longer exists. Its beginnings go back to the middle of the 11th century, but an earlier church must have existed at this location. Beside the Market church, the main church of the town, are located four further churches in the town center: Jakobi church, the Romanesque Neuwerk church, Frankenberg church in the miners’ district and the Baroque Stephani church. At a height of 60 metres, the northern tower of the Market church offers great opportunities for taking photos.

Special thanks to Helena A. Galanakis and Marina Vetter who helped us with great information and material to make this article possible. For more information about Goslar visit Goslar.de.