Top 12 Things To Do In Male 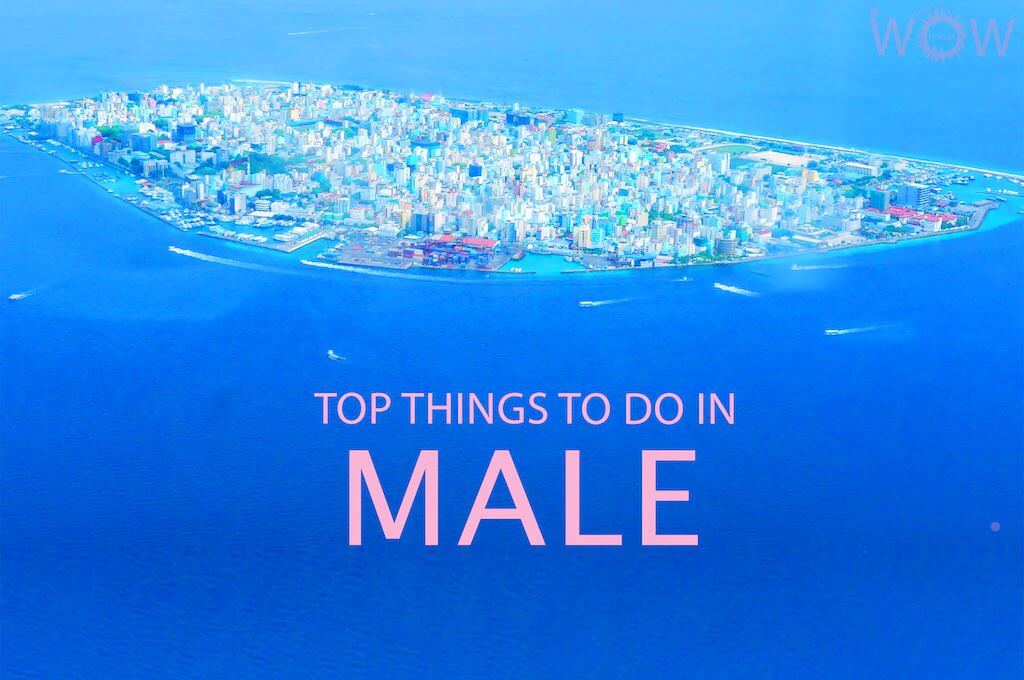 Male the capital of the Maldives is throbbing with energy with the number of visitors that constantly descend on the island. Visitors either come to explore the attractions of the island or transit from Male to the other resort islands. With its ever-growing population, Male has the distinction of being the fifth most densely populated city in the world. The royal dynasties once ruled the Maldives from the island of Male which was considered the King’s Island. Fortifications and gates which were once a part of the city were razed to the ground under President Ibrahim Nasir’s rule, wiping out the visual history of the island. The Friday Mosque is possibly one of the only remnants of this bygone era. However, to get a true feel of what the Maldives really is, Male is the place to visit.
[booking_product_helper shortname=”male”]

The 2.1km long bridge is the first interisland bridge in the Maldives connecting the islands of Male, Huluhule, and Hulumale. The bridge which was opened on 30 August 2018 was originally called the China–Maldives Friendship Bridge due to funding received from the Chinese government. What is really impressive about this bridge is that it goes over the open sea, which means that its supports have been planted in the seabed.

The Old Friday Mosque which was built in 1658 is the oldest mosque in the country. Constructed from coral stone, the beautiful structure has some intricate designs onto which the Quranic script has been chiseled. The interior of the mosque has some elaborate woodcarvings and fine lacquer work. The introduction of Islam to the Maldives is commemorated on a long panel from the 13th century. A squat blue and white minaret outside the mosque dates back to 1675. The mosque also has a cemetery with graves of the former sultans, distinguishable by the gold plated lettering. Tombstones with rounded tops are those where females are buried and those with pointy tops are the male burial sites. Non-Muslims who are appropriately dressed can walk around the graveyard without permission but to enter the mosque, special permission is required.

Male thrives on fish and one of the best places to experience the camaraderie of the locals is at the fish market. Although this may not be your idea of a tourist attraction, it’s a lot of fun watching the day’s catch being brought in and sorted out. Maldivian women are not usually seen in these areas but female outsiders can walk around freely without any problems.

This beach is definitely not one of the best beaches in the Maldives but this crescent sand beach is very popular with the locals. Crafted from the breakwater tetrapods, the beach attracts many locals looking to enjoy a day at the beach. Western swimwear is prohibited and only modest swimwear is allowed here since the locals frequent the area. The cafes nearby are generally full on the weekend or a holiday.

The official residence of the President of the Maldives is located in the historic center of Male close to the Friday Mosque. Muleeáage which means ‘new house of Muli’ was completed in 1919 after it was commissioned by Sultan Muhammad Shamsuddeen III for his son. Prince Hassan Izzuddin occupied the house between 1920 and 1934 but it was abandoned after his arrest. In 1953 Muleeáge became the official Presidential Palace.

The closest island to Male is Hulhule which is the site of the Velana International Airport. The island is the main hub for travelers to the nearby islands. It was once home to the indigenous Giraavu people who had been uprooted from their ancestral home on Giraavuru island and forced to live here. When the airport was built they were once again shifted to newly reclaimed areas in Maafanu district. There is only one hotel on the island which is mainly used by passengers transiting from Male.

Villingili island lies two kilometers west of Male in the North Male Atoll. The island which was once a resort is easily accessible by the local ferry service which operates 24 hours. It is a popular destination for local residents and as such there are a lot of options for staying over. The island is home to Liquid Water Sports and is one of the few hydro sports hubs in the Maldives.

To the southeast of Male, this poignant memorial is dedicated to the people who lost their lives in the devastating ‘Boxing Day’ tsunami which was the result of an earthquake in Indonesia in 2004. The names of the 74 people are engraved on the vertical rods that make up the structure and 20 steel balls around the structure are symbolic of the country’s atolls. The artificial lagoon located near the monument is a good place for swimming.

The reclaimed island of Hulhumale located in the south of the North Male Atoll is the fourth largest island in the Maldives. Phase I of the reclamation project was completed in June 2002. For the first time, the island was connected to Male and Hulhule by road in 2018 when the Sinamale Bridge was opened. There is a small beach for Westerners on the island but if you’re looking for the true Maldives experience of pristine beaches, you won’t find it here. Hulhumale is a good place to explore while transiting.

One of the most prominent landmarks in Male is the golden dome of the Grand Friday Mosque which is located within the Islamic Center. The mosque which was opened in 1984 is the biggest mosque in the country. Tourists are allowed to visit the mosque when prayers are not on. However, you must be properly dressed to be able to enter the mosque. The three-storeyed Islamic center which houses the Ministry of Islamic Affairs and a library is also a major tourist attraction.

To get a true taste of the local culture and its produce take a turn in the local market where people from different parts of the country gather to sell homegrown and imported vegetables. Coconuts and bananas are in plenty as is betel leaf. Don’t expect too much from the local market but its the best place to get cheap fruits and vegetables and to get a feel of the local vibe.

Mohammed Thakurufaanu is hailed as the national hero of the Maldives for liberating the country from Portuguese rule. His victory over Portugal is celebrated as ‘Qaumee Dhuvas’ or National Day throughout the country. He was then proclaimed as Sultan by the Maldivian from 1573 to 1585.  Boduthakurufaanu, a road in Male is also named after him. Rather surprisingly, his tomb is located in the grounds of a small mosque in the backstreets in the middle of town.