Top 12 Things To Do In Reims 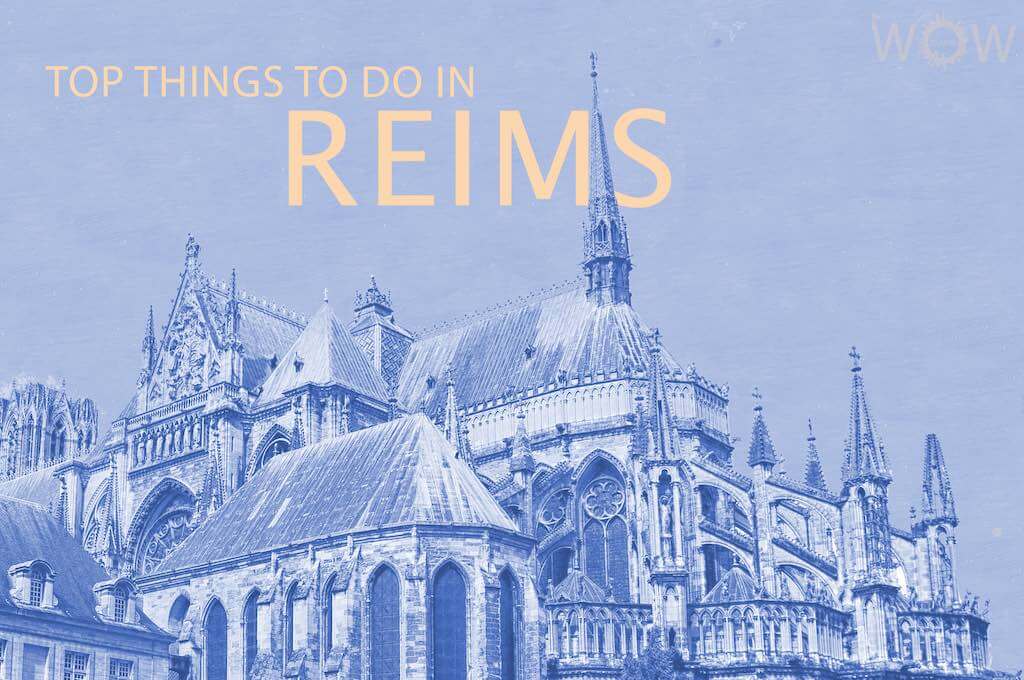 Reims, an ancient city, was founded by the Celtic tribes and later invaded by the powerful Romans in 356. There is a long chronology of historical events that took place in Reims. Most importantly it is known as the Coronation or the Champagne capital of Europe. Being a rich ancient city, it is certainly an exciting destination for the tourists visiting France. Let’s have a look at, what this city has to offer apart from the bubbly glasses.
[booking_product_helper shortname=”reims”]

Erected in 1211, Cathedral Notre Dame is a pure Goth style cathedral, which is famous for its exceptional aesthetic features. The gorgeous rose window, stained glass windows, an astronomical clock, and a sheer Gothic organ case will definitely leave you stunned. Numerous coronations have taken place at this historic landmark of Reims. Certainly a treat for gothic art lovers!

Another jewel in the crown of ancient structures of Reims, this palace was a favorite venue of many French kings for post coronation banquets. Currently a museum, it boasts ancient statues, tapestries, and cathedral relics. Do not miss to see the 9th century Charlemagne’s talisman – truly a piece of art.

The Museum of Fine Arts

This museum is primarily known for its fine collection of landscape art, made by the famous 19th-century artist Camille Coroy. Other art collections include pieces by impressionists and German renaissance artists. The entire European art movement from the 15th to 19th century has been displayed at this museum. Worth a visit for all the art admirers!

Surprisingly you won’t find any significant traces of Roman history in Reims, apart from this structure. An arch built around 200s is referred to as the largest surviving Roman arch. It served as the main gate for the ancient Roman city located right on this spot. Those who are interested in Roman mythology and reliefs will certainly enjoy their visit to this distinct ancient site.

Welcome to the oldest church of the city of Reims. Constructed between 1000 and 1050, it rests on a site where a chapel stood previously. Façade of this church portrays pure Gothic architectural essence, whereas the interior is of original Romanesque design. During the First World War, it was damaged extensively and it took forty years to repair this structure.

Developed in the late 18th century, this fort was a part of the extensive defense system engineered by the French to manage the brunt of Franco-Prussian war. It housed an infantry of 270 men and 6 De Bange 155mm cannons. Though it was pounded heavily during the First World War, it was never conquered. As a visitor, you can roam the extensive tunnels and see the ancient war relics.

Who isn’t interested in automobiles? This museum has nearly 250 cars and several bikes on display. Here you will get to see a detailed account of the innovations, brought forward by the French automobile industry. The oldest vehicle in the museum dates back to 1908. You will also come across, limited or exclusive editions of different automobiles and certain defunct brands like Berliet, Delage and Slamson. A totally fascinating venue!

Built in the honor of King Louis XV, in pure neoclassical style, it has cast-iron lanterns and balustrades on arcades and roofs. There is also a statue of the King right in front of the building. Pierre Cartellier was the chief designer of its draft plan. Located in the main square area it has now been converted into a library. It is a picturesque location where you can take some cool photos.

It has an interesting history attached to its existence. A Japanese artist named Foujita, who converted to Christianity, thought of designing this chapel himself. He was so passionate that he managed the architectural plan and construction himself. Some financial support was provided by Rene Lalou – a French lawyer. You can see Foujita’s sense of devoutness, in each intricately designed section of the chapel.

Looking forward to enjoying some great views of the city? Then certainly Vesle Canal is the right option for you. Here you can roam around, bike or just sit and connect with nature – away from the hustle of the main city. It’s a lengthy canal that has different parks, sitting areas and jogging tracks.

This art Nouveau style covered market was constructed in 1927, by engineer Eugene Freyssinet and architect Emile Maigrot. After a gap of nearly 25 years, it was opened again in 2012. This place is well known for hosting cultural events and exhibitions. You can also find a good variety of French food and souvenirs here.