Top 12 Things To Do In Saint Lucia 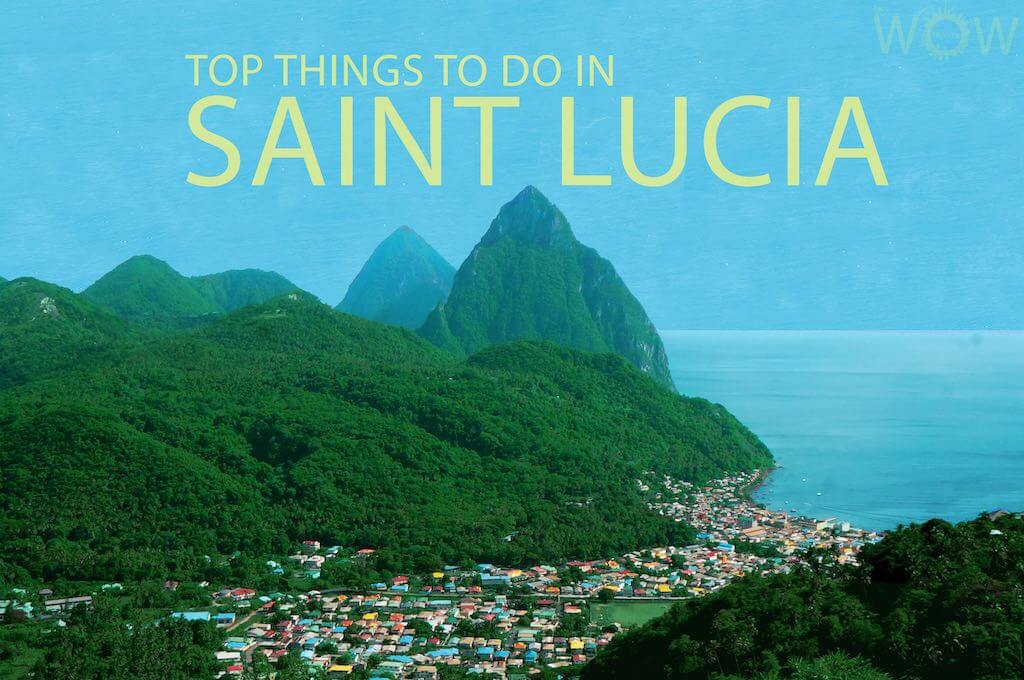 Undoubtedly one of the most beautiful places in the Caribbean, Saint Lucia is a small island located between Martinique and St. Vincent. Touted as one of the best honeymoon destinations in the world, the island is much more than that as it offers stunning mountain views, secret waterfalls, pristine beaches, and a wide variety of activities making it a great mix of seeing and doing. Here is a list of our picks of the things that you should do if you ever visit Saint Lucia.
[booking_product_helper shortname=”saint lucia”]

Pigeon Island is a human-made causeway located at one of the northernmost points of mainland St. Lucia. Spread over 44 acres, the landmark is an important piece of the island’s history with forts, cannons, docks and an old holding cell spread throughout. It is the home of the annual Jazz and Arts Festival which has featured artists like Rihanna, John Legend, and UB40.

Located at the northern end of Reduit Beach, in front of the Bay Gardens Beach Resort is the inflatable water park known as Splash Island Water Park. It is a great way to spend the afternoon for travelers who have children and want to do more than just lay on the beach. Made up of a series of obstacles, the park has everything from a trampoline to a climbing wall. In addition, life jackets are mandatory for all participants, and there are also many lifeguards on duty.

Castries is the capital city of the island and is one of the most visited places on the island. The bustling market is always filled with patrons, especially on Saturday mornings when locals go to buy their weekly produce. One can find everything from street vendors selling a variety of souvenirs, fruits, vegetables, and spices to local dishes served from early morning to mid-afternoon.

The Government House is the official residence of the Governor-General, the representative of the monarch of St. Lucia, Queen Elizabeth II. The house is located near the top of the Morne Fortune Hill, and it offers amazing views of Castries. Tours of the building can only be arranged by appointment and are usually held on Tuesdays and Thursdays.

Make Your Own Chocolate

St. Lucia is one of the few islands known for its cocoa plantation which dates back to the 1700s. There are many best hotels in Saint Lucia which offer some kind of chocolate-making activity, but the best has to be at Hotel Chocolat. In what the hotel refers to as the “tree to bar experience,” visitors can harvest the cocoa pods from the trees on the estate as well as create their chocolate bar with all the fixings.

The island has a variety of waterfalls, from humanmade structures to natural rivers running off steep cliffs. Located less than a mile inland from the Soufriere Harbor is the Toraille Waterfall which cascades off a 50-foot precipice into a shallow pool below. Most visitors like to wade in the pool while others like to stand under the forceful water as it makes its way down.

The Sulphur Springs is a dormant volcano which was created some hundreds of thousands of years ago when a weak spot in the volcano’s crust collapsed. It is the world’s only drive-in volcano, which means that visitors can drive right next to it. After taking a tour of the volcano and the museum, visitors can head down to the mineral-rich thermal mud pools. The locals living near the attraction claim that it has rejuvenation properties. A word from the wise, wear an old bathing suit as the mud tends to stain clothing.

Get a Day Pass at a Hotel

For those wanting the hotel treatment without the high cost, a day pass is a perfect option. Hotels like Capella Marigot Bay, Jade Mountain, and Coconut Bay, offer day pass options to those who are passing through. Visitors have access to most of the amenities, and many of the packages also include food, drinks, and hotel transfers.

St. Lucia’s food fuses their island flavors with classic French cuisine, making for an experience unlike any other. From street food to tapas bars and elegant steakhouses, there is plenty to taste on the island. Different towns like Gros-Islet, Anse Le Raye, and Dennery have a weekly weekend food festival where you can try out the local cuisine while listening to great music from around the region.

Among the top-shelf liquor found at bars and hotels around the island are a unique variety of local spirits, some of which have won international awards. People who are interested in seeing how they are made can go down to one of the local distilleries. In the end, visitors are allowed to sample some of the rum, either right out of the bottle or in cocktails. Be sure to have a designated driver if you are thinking about indulging.

Hike Up a Piton

The Pitons are the most iconic landmark of St. Lucia, and it is seen on the country’s flag, local beer, and the currency.  The mountains; Gros Piton (big) and Petit Piton (little) are two volcanic formations standing over 2,400 feet high. Although the mountains are located in different towns, if you look at them from a certain angle, they appear to be nearby. People wanting to take the trek should get a local guide as it is not for the faint at heart. It can take over 4 hours just to get to the summit, but the views are well worth it.

Relax on a Beach

Beautiful beaches are one of the main reasons why people visit the Caribbean islands and St. Lucia is no different. While most of the beaches have the classic white sand, there are a few black sand beaches. Some of the most commonly visited ones include Reduit beach and Anse Chastanet beach where tourists and locals alike relax. One can also take part in water sports, eat at nearby restaurants, or lay back on a sun lounger.