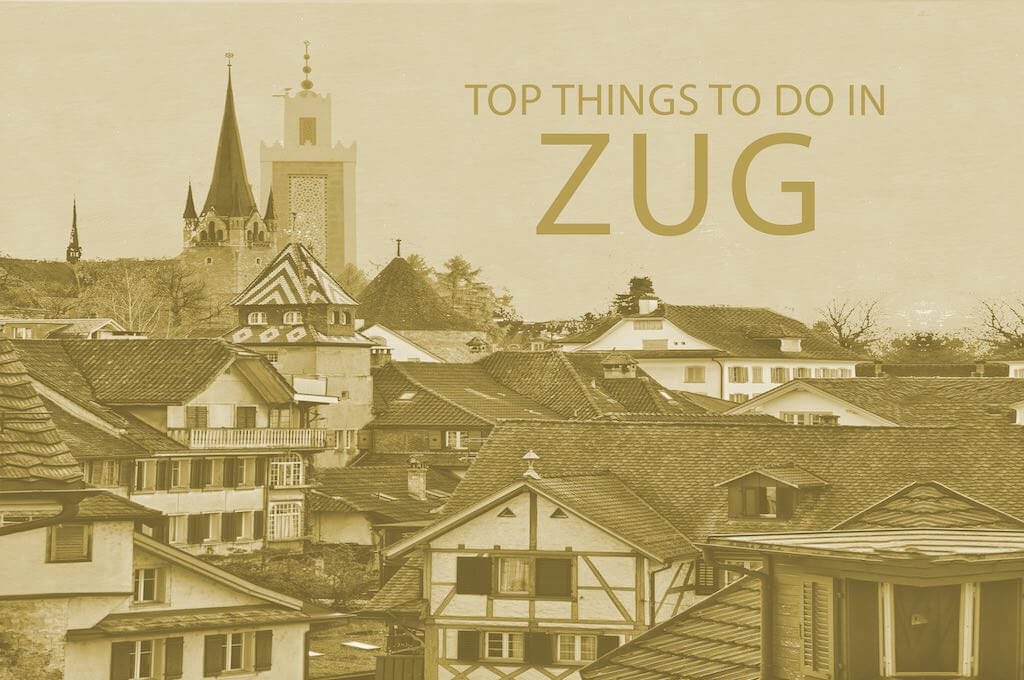 Like most towns in Switzerland, Zug too is ringed by mountains and situated near a lake, but what makes this city stand out is its obvious affluence. Zug which was founded by the Kyburgers in the 13th century AD is a low tax region where the headquarters of a number of multinational enterprises are located. Not surprisingly, Zug is one of the richest cantons in one of the richest countries in the world. The city has adapted well to the growing expat community and is now a place that is international but with distinctive traditional and local touches. Its proximity to big cities like Zurich, and Lucerne, give it an edge over other towns in Switzerland, making it a preferred destination.

This rather strange but prominent landmark was built at the beginning of the 11th century possibly as a wooden manor house for a local nobleman. It was later expanded and a tall stone wall was built around the house. In the 13th century, the castle was taken over by the Kyburgs who founded the city of Zug. It later passed to the Habsburg and Lenzburg dynasties. The Zug Castle today houses the town’s museum and is a great way to discover Zug’s past, especially the era when the town had a tendency to partially sink into the lake.

Zug’s skyline is dominated by the spire of St. Michael’s Church. The church which was built between 1898-1902 is the largest church in the city. Prior to this, the church of the patron saint was situated much higher up. The church with its red roof and old architecture is a great place for a photo op. At the start of the cherry-picking season, the bells of the church were rung in an afternoon in June to inform the town that they could start picking cherries. Picking cherries before the bell was rung was a punishable offense.

The beautiful Lake Zug which lies mostly within the borders of the Canton of Zug is a great place to relax and take in the beauty of the surroundings.  In the midst of the lake is an interesting fountain that spurts water high into the lake. The fountain has been in the lake since the early 20th century but the water jets were installed in 1968. The fountain was turned off for a brief time in 2010 for maintenance but a lack of funds delayed its reopening till 2012. Today the fountain in the lake is a beautiful sight and an iconic symbol of Zug.

At the edge of the Old Town you’ll find the 16th century ‘Hof im Dorf’ which has housed the world-class Kunsthaus art museum since 1990. One of the most important collections of Viennese Modernism outside Austria is showcased here. The collection is not huge because of the space constraints but there are continuous thematic exhibitions held here.

The distinctive Zytturm with its blue and white tiled roof stands at 52 meters, dominating the skyline of the Old Town. The original entrance to the old town was simply a gated opening but at the end of the 13th century, a protruding D-shaped tower was built to secure the gate. The builder of St. Oswald’s church later extended the tower to become one of the most prestigious buildings in the town. In 1557, more alterations resulted in the structure of the present tower. Another addition to the tower was the astronomical clock in 1574. Besides the hours and minutes, the clock tower also shows the weekdays and months. The tower also served as a punishment center for petty criminals. Visitors can gain access to the tower by collecting the keys from the nearby police station.

The Old Town of Zug located just near the lake is a step back into the past. The pretty medieval buildings that flank the cobbled streets and the small family-owned shops make it feel like the Alstadt is frozen in time. You can stroll down the streets and enjoy the local specialties, especially the famed cherry cake, or visit the old buildings in the area.

The oldest place of worship in Zug which was first documented in 1266, is the Liebfrauen Chapel dedicated to Our Lady. The simple exterior of the chapel is in sharp contrast to the beautiful interior which has evidence of both the Baroque and Late Gothic styles. The murals on the walls and the painting of Mary’s life on the ceiling are definitely worth a visit. Liebrfrauen Chapel is also a favored venue for weddings.

Zug has four historical squares but the most popular is the Landsgemeindeplatz on the waterfront. Surrounded by bars and restaurants, it is one of the best places to soak in the local vibe while sipping a drink. In the past, from the 14th century until 1847, the square was where people met to decide on issues of the canton. Today various festivals and markets are held here. Landsgemeindeplatz is also a popular venue for open-air concerts.

The historic estate and mansion also known as the “Pearl of Zug” is located in the southern-most part of Zug. The Salesianum was built in different stages and comprises the St. Karl Borromaus chapel built between 1615-1637, the Herrenhaus that was built in 1750 and the Mittelbau built between 1750-1769. The Salesianum is located at St. Karlshof which gets its name from Saint Charles Borromeo. According to legend, this was the first land area that the saint touched after crossing Lake Zug in a boat in 1570. The French style villa and mansion got its present name in the late 19th century in honor of Mother Salesia Strickler of the sisters of the Holy Cross.

The other church spire that is clearly visible on the Zug skyline is that of St. Oswald’s Church whose foundation stone was laid on 18 May 1478. St. Oswald’s Church is a significant example of Late Gothic architecture. The entrance is the richly decorated Gothic ‘Doorway of Kings’ which is flanked by the city’s patron saints, Oswald and Michael. Since its completion, the church has undergone several renovations and today all that remains of the original church are the beautiful wooden choir stalls. Two wooded figures depicting St. Michael and Mary, on both sides of the chancel steps are also from 1500. Also noteworthy is the magnificent mural of The Last Judgement, and the old organ built by Victor Ferdinand Bossard.

The exact age of the tower is not really known but estimates show that it was probably built in the second decade of the 16th century. Previously known as the Hof tower, the name changed when it was bought in 1697 by a citizen named Huwiler. It is the smallest of the four towers that still stand prominently on the outer town walls. The towers were built as a defense system but were never used as Zug was never under siege. Huwiler Tower now stands in the surroundings of the gardens belonging to the art museum. The ‘Daheim Park’ beside it can also be hired for special occasions.

The Zugerberg mountain that overlooks the lake and the canton of Zug is well worth a visit. A funicular railway takes visitors to the top in just 8 minutes. The spectacular views over the Alps and the foothills from the vantage point at 925 meters are quite breathtaking. There are also several hiking paths to explore which are open throughout the year. In the winter a 27km cross-country ski trail is held here.