Top 13 Things To Do In Iran 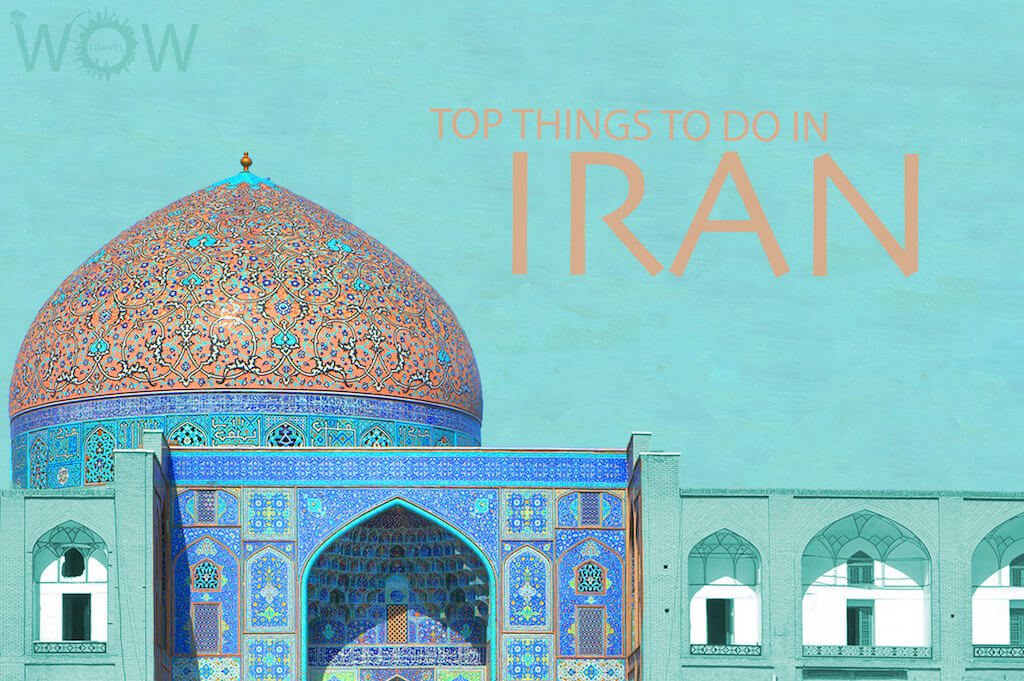 Iran, an Islamic republic on the Persian Gulf is one of the world’s oldest continuous civilizations and Iranians are proud of their 5000 years of history, seeing themselves on par with Greece and Rome. Come and discover an unexpected beautiful land, ancient historical cities and unique cultural treasures, largely unseen by western eyes. Iran has 19 sites designated as World Heritage Sites by the UN (plus 49 listed as “tentative”). The list includes historical monuments like the ancient Tabriz Bazaar, once a key trading stop on the Silk Road and the well-preserved ruins of Persepolis, dating back all the way to 500 BC. Iran is expecting a significant rise in the number of tourists visiting the country in the wake of the historic nuclear deal. Years of sanctions and isolation have left Iran untouched and extremely authentic and this is exactly why you need to come before everyone else does. Check out our list of the Top 13 Things To Do In Iran.

Naqsh-e Jahan Square, known as Imam Square, formerly known as Shah Square, is a square situated at the center of Isfahan city. It is the second biggest square in the world, with its lush gardens and fountains, bustling bazaars, and its extravagant series of palaces, mosques, and Islamic architecture.

situated 60 km (37 miles) northeast of city of Shiraz in Fars Province, Persepolis (meaning “city of Persians”) was the ceremonial capital of the first Persian Empire –  Achaemenid Empire. The well-preserved ruins that remained buried in sand till 1930s were discovered and excavated by French archaeologists.

Amir Chakhmaq Square, built in the 9th century in Yazd, is part of Amir Chakhmaq Complex. The complex, including a mosque, an square, a caravanserai, a Tekyeh (a place where religious mourning rituals are held), a bathhouse, a cold water well, and a confectionery, is well known for its symmetrical sunken alcoves.

Eram Garden is a historical Persian garden in the north of Shiraz and includes several historic buildings and the botanical garden. It is one of the most beautiful and monumental gardens of Iran. Apparently, its history goes back to the period of the Saljuq Dynasty (A.D.1038-1194).

The magnificent buildings and structures in the holy shrine of Imam Reza situated in the holy city of Mashhad, comprises one of the oldest and most beautiful religious and historical monuments in the world. The Imam Reza Shrine is the largest mosque in the world by dimension and the second largest by capacity

Tehran is the political and intellectual heart of Iran. It’s not the prettiest city in Iran, the honor belongs to places like Isfahan, Yazd and Shiraz. But it is without a doubt the most important, vibrant, and stimulating city. and the best place to experience it would be the Grand Bazaar. The Grand Bazaar is a historical market and the commercial heart of Tehran. Throughout its history, in addition to shops, the Grand bazaar has contained banks and financiers, mosques and guest houses. It boasts over 10 km (6.2 miles) of labyrinthine covered shops and is the oldest trading center in the city.

Valiasr Street in Tehran is reportedly the longest street in the Middle East and one of the longest in the world and is a great place to relax. It’s full of American-style fast food outlets like McMashallah and Kentucky Fried Chicken. The street is where you come to do some serious shopping. It is full of known European brands. Source: mic.com

Kashan is a large city, in the Isfahan province, western Iran. The city grew to become one of the most important trading centers of Iran between the 12th and 14th centuries. With its origins dating back to late Neolithic times (approx. 7,000 BCE), Kashan is one of the oldest human settlements in the world. Archaeological remains of artifacts and buildings dating back 9,000 years can still be found in the city. Kashan is the first of the large oases along the Qom-Kerman road which runs along the edge of the central deserts of Iran. Make sure to viait the Tabātabāei House, a historic house built in early 1880s for the affluent Tabatabaei family. It consists of four courtyards, wall paintings with elegant stained glass windows, and includes other classic features of traditional Persian residential architecture, such as biruni and andaruni. Other famous landmarks of the city are the historical mosque Agha Bozorg Mosque and Hammam-e Sultan Amir Ahmad, a traditional Iranian public bathhouse.

The Nasir ol Molk Mosque, also known as the Pink Mosque, is a traditional mosque in Shiraz. From outside it looks like a conventional mosque, but inside there is something more. This is a space where light and worship intertwine. The mosque comes to life with the sunrise and colours dance throughout the day like whirling dervishes. It reflects on the ground, walls, the arches and the towering spires. It even reflects on the visitors as if a colorful ball is hit by the first sun ray and explodes to thousands of butterflies all around. Source: muslimheritage

Step back in time to 15th-century Persia by visiting Tabriz with its covered Qaisariyeh Bazaar, one of Iran’s UNESCO World Heritage Sites. It is one of the oldest bazaars in the Middle East and the largest covered bazaar in the world.

Sandwiched between two deserts, this isolated oasis town offers the visitor one of the best examples of traditional Iranian mudbrick architecture. The city of Yazd’s first mention in historic records predate it back to around 3000 years B.C. when it was related to by the name of Ysatis, and was then part of the domain of Medes, an ancient settler of Iran. Here you get the feeling you are traveling a thousand years back in time while walking in a maze of narrow streets twining among mudbrick houses often topped with characteristic windcatchers. It is such a romantic that many Iranian choose it for their honeymoons.

The Azadi Tower (formerly known as the Shahyad Tower) is Tehran’s most iconic landmark. It was built in 1971 to celebrate the 2,500 years of the Persian Empire. The tower is 50 meters tall (164 ft) and is located at Azadi Square, the largest square in the Iranian capital.