Top 12 Things To Do In Tehran 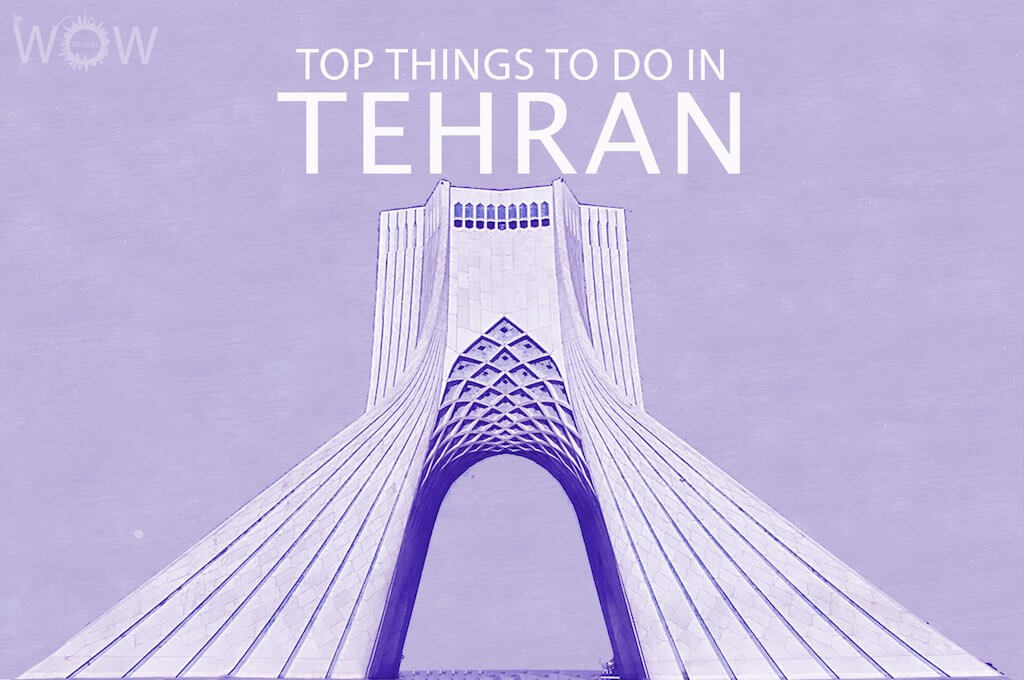 Sitting at an elevation ranging from 1,712 meters to 2000 meters in the north, on the lower slopes of the Alborz Mountains, Tehran is the 9th highest capital city in the world. The wealth of cultural attractions in Iran‘s capital city is a huge draw for visitors to this part of the world. Over 250 years of history are showcased in the numerous museums and monuments that the city has. Under the directions of Reza Shah, the early 20th century saw a large scale overhaul of the city with demolitions of old structures and building of new ones, resulting in the construction of an almost ‘new’ city. Streets were widened and the old citadel and city walls were demolished to make room for easy transportation. However, there are still many notable monuments and places worth visiting in Iran’s most liberal city. From the early Golestan Palace to the most recent Milad Tower, there is much that will wow a visitor to Tehran.
[booking_product_helper shortname=”tehran”]

A grand display of the excesses of the Qajar dynasty, is the Golestan Palace, one of the oldest and grandest historic monuments in the city. The palace complex which was built during the 131 years of the Qajar rule was initially much larger than what it is today. During the modernization of the city under Reza Shah, many of the buildings within the complex were destroyed as he felt it would hinder the growth of the city. Today, the palace consists of 17 structures and halls, the most outstanding being the Main Halls, Mirror Hall, and Painting Gallery.

An iconic landmark that marks the west entrance of the city is the 45m Azadi Tower (Freedom Tower). The marble tower was built in 1971 to mark the 2500th anniversary of the first Persian empire. It’s an ingenious mix of the traditional Iranian styles with the modern with an ‘iwan’ styled arch. The top can be accessed via a lift or by stairs. In the basement of the floor is an interesting museum with specially selected artifacts denoting various periods in Iran’s history.

Another beautiful palace of the Qajar era is the restored Masoudieh Palace. Built in 1878 by Naser Al-Din Shah for his son Masoud Mirza, the exterior of the palace is a fine blend of Iranian-European style. The palace was the main residence of Masoud but late became the main gathering point during the Iranian Constitutional Revolution. The palace looks out on sprawling gardens. A cozy cafe is also located within the castle where you can spend some time enjoying the space.

A trip to the historical Grand Bazaar can be quite overwhelming if you’re not accustomed to crowds. Quite similar to the Grand Bazaar in Istanbul and the bazaars of Morocco, the bazaar is an eclectic mix of goods and people. There are different entrances to the 10km bazaar which is split into several corridors specializing in various kinds of goods. Besides, shops and markets you’ll also find guest houses, a church, and the Imam Khomeini Mosque within the vicinity of the bazaar. It’s a great place to check out locals goods and get a feel of a busy market place.

One of the city’s largest green spaces is the beautiful Mellat Park at the foot of the Alborz mountains. The park is a popular place to unwind with cafes, snack bars, and a small aviary. It also has the distinction of having one of the first musical fountains in the city.  A cineplex is also located at the southeastern edge of the park.

A place that should definitely be on your itinerary is the Treasury of National Jewels more commonly known as the ‘Jewels Museum’ located in the Central Bank of Iran. Most of the spectacular range of jewelry on display dates back to the Safavid dynasty who ruled from 1502 to 1736 AD. When Iran was invaded by the Afghans in 1719, the Iranian crown jewels were plundered and carried off by them. However, after nearly a decade, they were driven back to Afghanistan from Iran by Nader Shah who in turn raided the cities of Kandahar and Kabul. He returned to Iran with the remnants of the crown jewels and other loot such as the Peacock Throne, the Samarian Spinel and the Koh-i-Noor and Daria-i-noor from India. Photography of this brilliant collection is prohibited and visitors are also forbidden from carrying phones and bags into the museum.

The Tochal mountain and ski resort is located on the Alborz mountain range and is an extremely popular place with locals. The top of the mountain is snowbound for 6 to 8 months of the year but even during the summer, the mountain is a popular hiking destination. One of the world’s longest gondola lift lines, the Tochal Telecabin runs from the Velenjak Valley to the last station at 3740m and is used by many visitors who are only interested in enjoying the spectacular scenery from the top. Station 7 has the main ski slopes which are covered in snow for a major part of the year. Tochal Hotel is also situated at the top at a height of 3550m. Depending on the weather, it is a one hour trek to the peak from the hotel.

To the northern part of Tehran is the Niavaran Palace Complex; the original part being built during the Qajar reign. Six different museums make up this complex, the most famous being the Niavaran Palace that was built during the Pahlavi Dynasty in the 1960s. To make room for this new mansion, all the buildings adjacent to the Saheb Qaranie were demolished. The other structure from that era to survive demolition is the Ahmad Shahi Pavilion which was used by Reza Shah as an exhibition center for gifts received from the world leaders. Visitors to the complex gain a deeper insight into the lavish lifestyles of the monarchs that once ruled Iran.

The award-winning Tabiat Bridge, designed by Iranian architect Leila Araghian is extremely popular with locals as it is one of the most popular places to ‘hang out.’ The 270m long, multilevel, pedestrian bridge connects two public parks Park-e-Talghani and Park-e-Abo-Atash. Besides its functionality as an overpass over the expressway, the bridge also has a food court, a restaurant, and benches for people to sit and socialize.

One of the more attractive modern buildings in Tehran is the imposing art deco-style brick building which houses the National Museum of Iran. Two complexes make up the museum, the Museum of Ancient Iran, which was opened in 1937, and the Museum of the Islamic Era opened in 1972. The rich history of Iran is showcased through the artifacts covering different eras. Amongst the ancient artifacts is the rather macabre head of the ‘Saltman’ from Zanjan. The remains of six well-preserved bodies were discovered at different times from the Chehrabad salt mines. Studies on the Saltman revealed that the remains dated back to the 3rd or 4th centuries, some of the other remains were from even further back in time. It’s a good idea to ask for an English brochure when buying the entry ticket to get a better understanding of the display.

The 435m-high Milad Tower, which dominates the skyline of the western suburbs, is the sixth tallest free-standing tower in the world. This multi-purpose tower bears a strong resemblance to the Menara tower of Kuala Lumpur, Malaysia. The lobby of the structure consists of 6 floors while the head has 12 floors. There are two observation decks on the top floors and also a revolving restaurant, cafeteria, and public art gallery.

To experience more of the opulence of the Qajar and Pahlavi dynasties head to the Saadabad Palace Complex across the foothills of Darband. The original summer home of the Qajar royals was expanded by the Pahlavi dynasty to its present state. 18 separate buildings, large gardens, and a  natural forest make up this sprawling 740-acre property. While most of the buildings have been converted into interesting museums, a few of them are used by the Office of the President of the Islamic Republic of Iran. One of the main highlights of the complex is the 54-room White Palace that was built in the 1930s. Other areas of interest are the Green Palace from the end of the Qajar era, the Fine Art Museum and the Nations Art Museum.