Top 5 Things To Do In Papua New Guinea 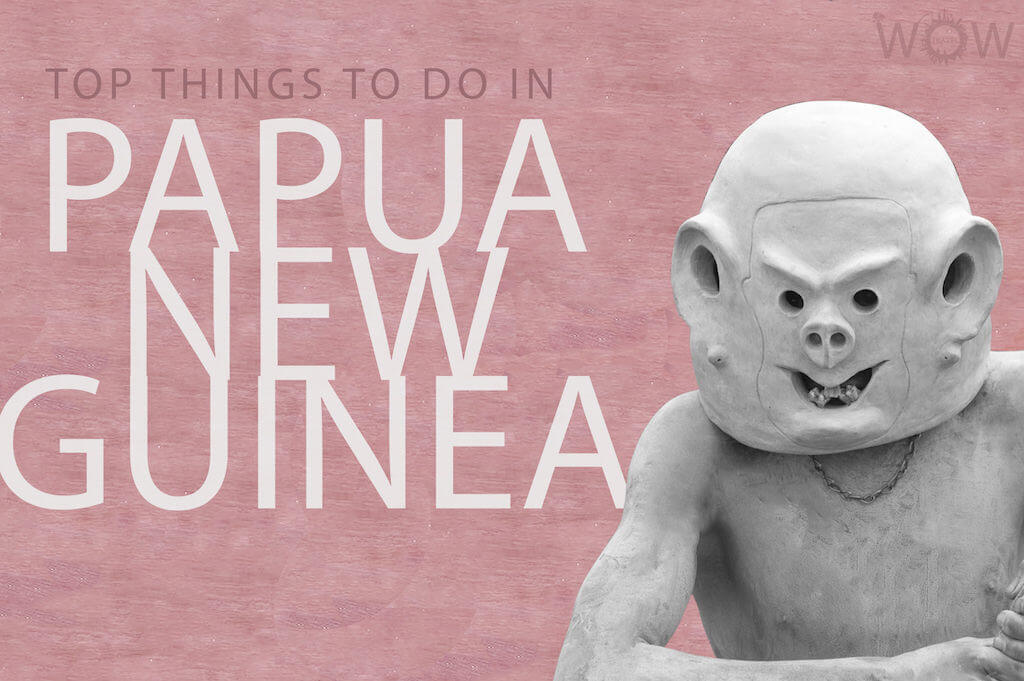 Located around 150 km (93 miles) North of Australia, Papua New Guinea (PNG) occupies the eastern half of the rugged tropical island of New Guinea (which it shares with the Indonesian territory of Irian Jaya) as well as numerous smaller islands and atolls in the Pacific. It is one of the most diverse countries in the entire world home to many different tribes, and cultural traditions, making it one of the world’s most exotic and mysterious destinations with over 850 indigenous languages still spoken. The country’s most famous attraction is the 96 km (60 miles) Kokoda Trail. Nevertheless, the capital, Port Moresby also boasts rugged jungle surrounds waiting to be discovered, incredible treks between the villages, spectacular views across mountains, valleys, rivers, fjords and much more. Let’s not forget to mention that it is renowned for having some of the best dive spots in the world. Here is our list of the Top 5 Things To Do In Papua New Guinea.

Papua New Guinea is one of the least explored countries of the world, culturally and geographically.

The Kokoda Trail, also known as the Kokoda Track, is aa world-famous route that runs 96 km (60 miles) from Port Moresby in the south to Owens Corner (then Kokoda Village) in the north. Kokoda Trail was the scene of some of the bloodiest battles of World War II and it’s the site where the advancing Japanese party lost their campaign to claim Port Moresby from the “back door” in their ultimate goal to capture Australia. A trek on the Kokoda Trail can be done either from the Port Moresby (Sogeri) side of the Owen Stanley Range or from Kokoda, which is the most preferred option and historically correct route. A moderate trek would take up to ten days and the elevation of the track is over 2,130 meters (7,000 ft) in parts. Kokoda can prove to be a difficult walk with high temperatures and humidity. The best time to walk the trail is between April and October. Source: kokodatrail

Surrounding the city of Lae is an expansive rainforest jungle, filled with magnificent tropical flora and fauna. 8 km (5 miles) from the center of Lae, the Rainforest Habitat comprises 3,000 sq meters (32,291 sq ft) of reconstructed rainforest inside a covered shade house. It incorporates a pond, raised walkways, plants and birds, saltwater crocodile and cassowaries.

The evergreen rainforest vegetation, rugged mountain ranges, imposing volcanoes and diverse marine resources makes Rabaul, a tropical island off the northeastern coast of Papua New Guinea, a perfect destination. Rabaul is a large natural harbour that was the main naval base of the Japanese during World War II. The area is also a very active volcanic region, sitting between 3 active volcanoes. Rabaul’s breezy beaches have access to 30 year-round scuba sites with the highest diversity of fish and coral in the world. Dive on the multitude of World War II ship and plane wrecks as well as some of Papua New Guinea’s most famous and spectacular reefs.

Port Moresby is the capital and largest city of Papua New Guinea. it is a spectacular city with a lot to offer. Explore the National Capital Botanical Gardens with numerous plant species, colorful birds, tree-climbing kangaroos and insect and snake houses. Visit the Bomana Cemetery, the cemetery with the most Australians killed in World War II. Nature lovers should check out Rouna Falls and Varirata National ParkThe the falls are a popular tourist site in Port Moresby and the Varirata National Park is a natural mountain region that offers fantastic views and a wealth of birds and other wildlife.

On the Sepik river near Palimbe, Kanganaman is a traditional community village, where carvers of exceptional talent whittle wood into elaborate masks, totems and figurines. It is also home to a spirit houses, Haus Tambarans, which is one of the finest examples of such a building in the country.