Top 7 Things To Do In Nicaragua 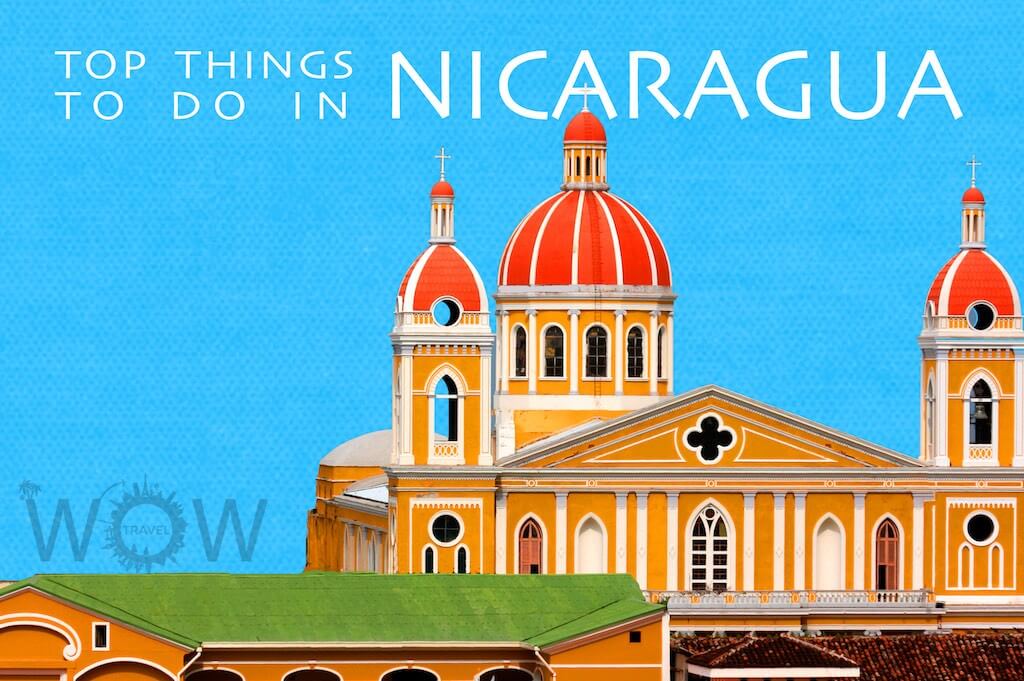 Nestled between the Pacific Ocean and the Caribbean Sea, Nicaragua is becoming a hot destination spot for families and backpackers. Apart from having a stunning coastline with two of the greatest water bodies in the world, Nicaragua is bursting with fascinating history, volcanic landscapes, beaches, mountains, beautiful colonial cities with charm and lush jungle with wildlife and villages. It has interesting culture and art, fascinating history and friendly people. Check out  our Top 7 Things To Do In Nicaragua.

Ometepe is an 8 shaped island which hosts two active volcanoes. It is the largest island on a freshwater lake in the world. With its two majestic volcanoes, relaxing small beaches, a lagoon, archeological sites, natural biodiversity and cultural background, Ometepe Island is really a natural paradise. The volcanoes that formed it, Concepcion and Maderas, offer challenging trails to experienced hikers, and stunning views from above. Another option is to rent a bike and go ‘finca hopping,’ exploring ancient petroglyphs, and bountiful coffee plantations.

Some say that diving around these islands is like what diving in the Caribbean used to be like, with unbroken coral, few other dive boats and plenty of marine life. Little Corn Island is the smaller and less developed of the islands, with a smaller diving community on the island. Big Corn Island has a larger choice of places to eat, sleep and dive. You can either catch a short flight or a long ferry ride to reach these islands. Source: runawaytravellers

As the oldest city in Central America at its original site, Granada is a fascinating and colorful city that is filled with interesting colonial-era treasures. Much of it has been built and rebuilt throughout the centuries, as various marauders and colonists have sacked the city. From 17th-century churches and museums to hidden courtyards and historic buildings converted to boutique hotels, Granada demands exploration. Among the top highlights in the town center are the grand cathedral at the main square; the tower at Iglesia de La Merced, from which many iconic skyline photos of Granada have been snapped; Antiquo Convento San Francisco, now a museum with a remarkable pre-Colombian collection; and the colorful streets themselves, with an architectural surprise in every block. Have lunch at Calle La Caldeza, a street blocked off from car traffic filled with restaurants and bars. Just outside central Granada, don’t miss the Fortaleza de la Polvora, a rather small medieval fort, and the nearby cemetery, which is fascinating to wander and explore, providing nearly limitless photo-ops. Source: theexpeditioner

One of Nicaragua’s great cities, León is the political and artistic capital of this country. It hosts enchanting buildings of Spanish colonial architecture, museums, art galleries and a beautiful courtyard central square. Spend some time simply by walking around the city square, exploring Recoleccion Cathedral and its rooftop views, as well as the baroque theater, street markets and sidewalk cafes. Our favoirte city in Nicaragua is buzzing with vibrant, friendly locals, interesting colonial architecture and countless restaurants and bars to eat and drink your nights away.

Near the village of Malpaisillo you will find the Cerro Negro volcano is a relatively young volcano (only 161 years old). In its young life it has erupted 23 times — the last one occurring in 1999. The slopes of the volcano are covered in gravel that makes them extremely slippery. Adventurous locals have invented a grand game that works on this volcano; it’s called volcano boarding. You hike up the mountain with a board, set it on the slippery gravel and sit on it. With a push, you fly down the slope at breakneck speed. It’s a very popular adventure sport. Source: amerikanki

Apoyo Lagoon is a beautiful deep and blue crater lake just outside of Granada. It is one of Nicargua’s most beautiful natural wonders and kayaking, paddle boarding, swimming, soaking up the sun, dining and relaxing are the some of the main activities here. The lake measures 48-square km in area and about 213 meter (700 ft) deep.