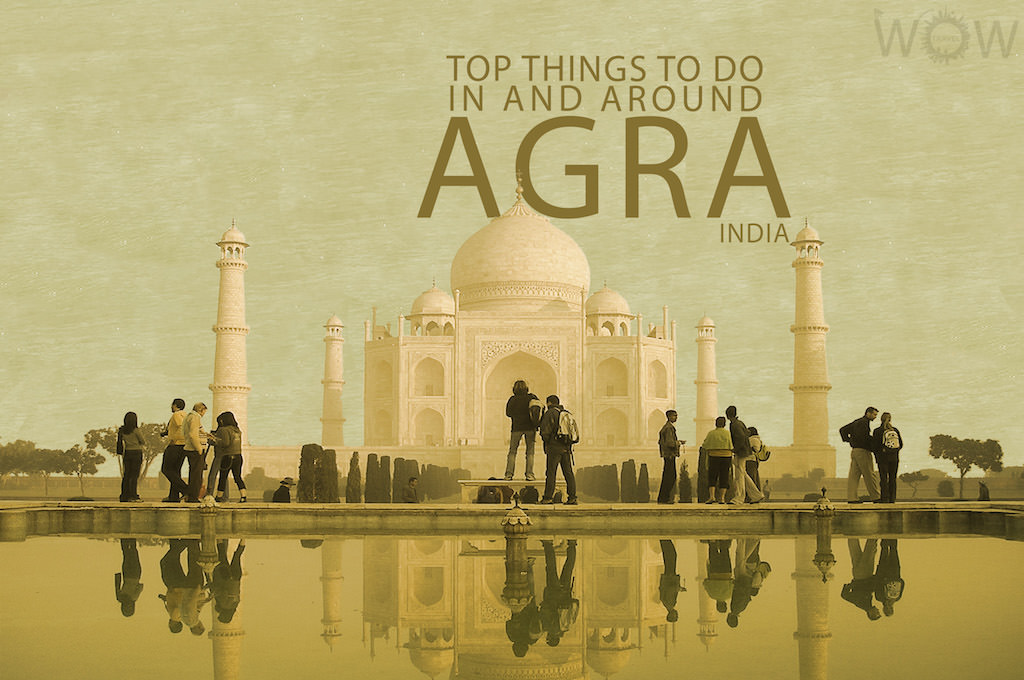 Famed for nestling Taj Mahal, one of the seven wonders of the modern world, Agra is a trip to remember. This astonishing Indian city is located some 200 km (124 miles) from New Delhi, and has witnessed the construction of numerous buildings on an elaborate scale. It is home to various monuments which are quite magnificent in their own right and are worth visiting. Check out our list of the Top 8 Things To Do In And Around Agra.

You cannot think of Agra without thinking of Taj Mahal, Both a UNESCO World Heritage Site and one of the Seven Wonders of the World. The white marble beauty was constructed in 1632 by Mughal Emperor Shah Jahan in memory of his beloved wife, Mumtaz Mahal. The Taj Mahal is located on the banks of River Yamuna and is best captured either at sunrise or sunset. The monument stands proof for the brilliance of Mughal architecture. Named as one of the wonders of the world, Taj Mahal stands the test of time.

Near the gardens of the Taj Mahal stands the important 16th-century Mughal monument known as the Red Fort of Agra. Largely overshadowed by the Taj Mahal, the Agra Fort is one of the finest Mughal forts in India. This powerful fortress of red sandstone encompasses, within its 2.5-km-long enclosure walls, the imperial city of the Mughal rulers. It comprises many fairy-tale palaces, such as the Jahangir Palace and the Khas Mahal, built by Shah Jahan; audience halls, such as the Diwan-i-Khas; and two very beautiful mosques. Source: unesco

Want to experience the heart of Agra? In the Old City behind Jama Masjid (mosque), you will find a tangle of narrow lanes housing a startling variety of wares including spices, clothes, sarees, jewelry, shoes, and snack stalls. It’s a place where traditional arts and crafts, such as marble work, are alive. This area, known as Kinari Bazaar, can be quite overwhelming if you don’t know your way around. Source: about.com

Korai, a hamlet nestled in Agra, just off the Fatehpur Sikri Highway is surely a must visit. It is a fulfilling experience that will give you a glimpse into the daily life of the tribal villagers of India. This village belongs to former bear rearers whose only source of livelihood was making money through bear and monkey dances. Come visit Korai and get a wonderful opportunity to see village life from up close and also a chance to interact with the villagers, learning about their unique, and yet simple lifestyle. Source: koraivillageagra

Near Taj Mahal, there are a few street markets where you can find exquisite products like marble based souvenirs, inlay works, genuine leather accessories, traditional juttus, Mughal carpets and others. You ought to take a trip through these streets. Even if you are planning to buy nothing, the sight of these items is marvellous. Source: travelogyindia

Jama Masjid, overlooks Agra Fort, is one of the largest mosques in India and is culturally important thanks to its Iranian architecture. It was built by Shah Jahan and dedicated to his favourite daughter Jahanara Begum. It is surrounded by the crowded bazaar, which is interesting to wander through on foot. The mosque topped with red sandstone domes and has five large arches that lead to the main prayer hall, which are skimmed by a beautiful bolster of sandstone adorned with floral motifs.

Fatehpur Sikri, the “City of Victory”, sits 35 km (21 miles) from Agra on a low hill of the Vindhya mountain range. Abandoned for centuries, the Indian site attracts tourists from around the world for its majestic buildings. It was built at the orders of the Mughal Emperor Akbar. Akbar’s tolerant religious views and interest in literature, architecture, and fine arts gave the buildings at Fatehpur Sikri a charismatic blend of Islamic and Hindu elements in their style and design. Fatehpur Sikri is enclosed by an 11 km (7 miles) long fortification wall interspersed with numerous gateways. The remains of the great city; the Imperial Palace Complex, the intricately built marble tomb of the great Sufi saint, Salim Chisti and the grand mosque are second only to The Taj Mahal, a benchmark of architectural beauty. Source: fatehpursikri