Top 9 Things To Do In And Around Antalya 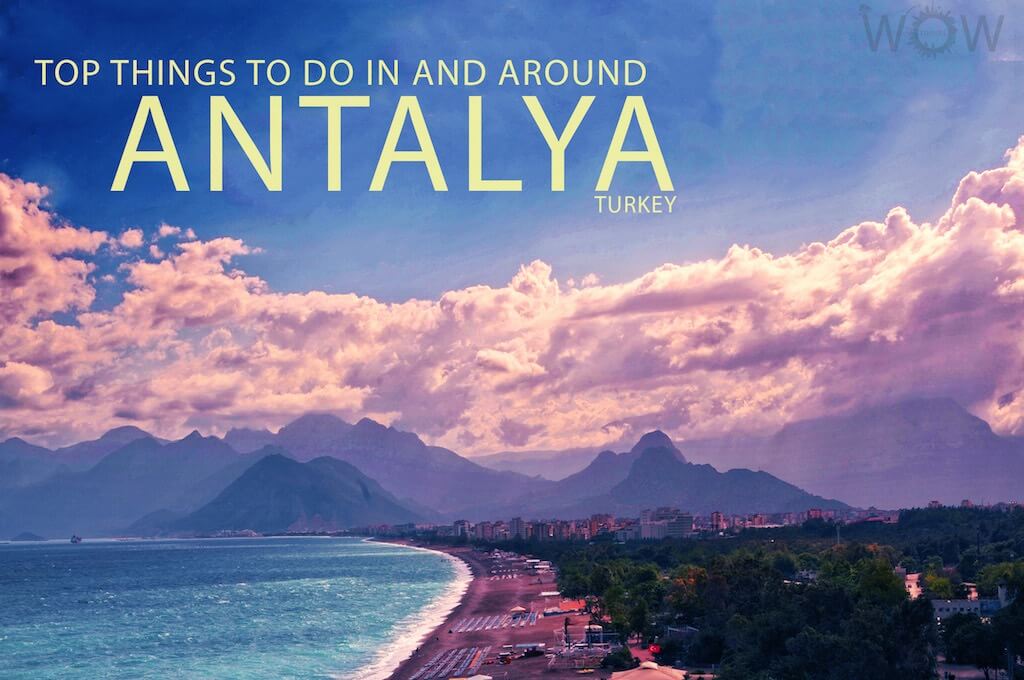 Located on the Mediterranean coast of Southwestern Turkey, Antalya is a charming city that boasts of breathtaking cliffs and mountains. There are plenty of ocean-view restaurants, large shopping malls, historic sites, pebbled beaches and if you enjoy the nightlife, this town has plenty of bars and lounges to discover. Antalya is a terrific city to spend a few days while checking out some of the surrounding points of interest. Check out our Top 9 Things To Do In And Around Antalya.

Antalya’s old historic bazaar (carsi) is situated along Kâzim Özalp Caddesi beginning at Kalekapisi Square then going north across Atatürk Caddesi. The old market is good for old and modern jewelry, souvenirs, leather bands and shoes, a large assortment of accessories, unique handcrafted items, and more. During the hot seasons, you’d better follow the local advice and carry bottles of water to help keep you going as you explore. Source: gpsmycity

The maze-like Kaleiçi neighborhood was made for strolling. Perfectly restored whitewashed and red-roofed Ottoman mansions line the cobblestone streets, now home to a plethora of boutique hotels, souvenir shops, art galleries and restaurants. The main square (Kale Kapısı) has a fortress gate and stone-clad clock tower, while the 18th century Tekeli Mehmet Paşa Mosque is worth a look just for its stunning interior tile work. Along Hesapçı Sokak you will find the graceful Kesik Minare (truncated minaret). Destroyed by fire in the 19th century, this is all that is left of a building that started its life as a Roman temple, was converted into a Byzantine church and finally became a mosque. Source: planetware

Just an hour drive from Antalya, Tahtali Mountain is the highest mountain closest to the sea on the region with an altitude of 2,365 meters (7,759 ft) . Holiday-makers may enjoy the stunning 360° panoramic view of the mountain ranges, beautiful landscape along Kemer and sea on the top. The Olympos Cable Car (Teleferik) operates daily on the hour and on the half-hour. The duration of the trip is 10 minutes. Source: kemer-antalya

Take a day trip to Termessos & Karain Cave. 40 minutes drive from Antalya, high in a mountain defile 38 km (24 miles) north of the Mediterranean coast is the walled city of Termessos. It is a spectacular Pisidian city built on the Taurus Mountains at approximately 1050 meters (3445 feet) above the sea level. The ruins are so well-protected by its mountain fastness that in 333 B.C. even Alexander the Great failed to capture it.
Karain Cave is a cave and located at Yağca village 27 km (17 miles) northwest of Antalya city. This cave was inhabited by the ancestors of the modern man continuously for at least 25,000 years and is the largest of Turkish caves where the traces of prehistoric human activities have been found.

The old harbor of Antalya is a small bay surrounded by the cliffs. In the period of Seljuks, its breakwaters were constructed. Today it is used as a marina and serves its visitors with its cafes, restaurants. bar and shops.

For a great adventurous day trip go to Köprülü Canyon. This canyon gets up to 400 meters (1,312 ft) deep and it is a great place for camping, hiking and especially rafting.

Located in a small park, Düden waterfalls are 15 meters (50 ft) high and 20 meters (65 ft) wide curtain of water. There is a natural cave behind the falls for onlookers to peer through. 20 minutes from there are is Kurşunlu waterfalls which are yet another spectacle of nature in the region.

The Yivli Minaret Mosque, also called ”Antalya Ulu Camii”, is a historical mosque located in the old town center. It is one of the first Islamic buildings in the city. The mosque’s fluted minaret, which was decorated with dark blue tiles, is a landmark and the symbol of the city. The mosque was built in 1230 and fully reconstructed in 1373. The minaret is 38 meters (124 ft) high, built on a square stone base, with eight fluted sections and has 90 steps to the top. Source: protamuhendislik

The Eternal Flame at Chimaera

In the heart of the Olympos National Park, Mount Chimaera has literally burned for thousands of years. There, at the site called Yanartas (or “flaming rocks”), one can see dozens of small fires which burn constantly from the methane that seeps through the vents in the rocks, according to BBC. Spread out over 1.2 acres, the “eternal” flames on the sea-facing slope have been used by sailors, since ancient times, as a natural lighthouse, according to the book “Myth and Geology,” by L. Piccardi and W.B. Masse. Here you can also see the ruins of the ancient temple of Hephaestus that was here.