Top 9 Things To Do In Sofia 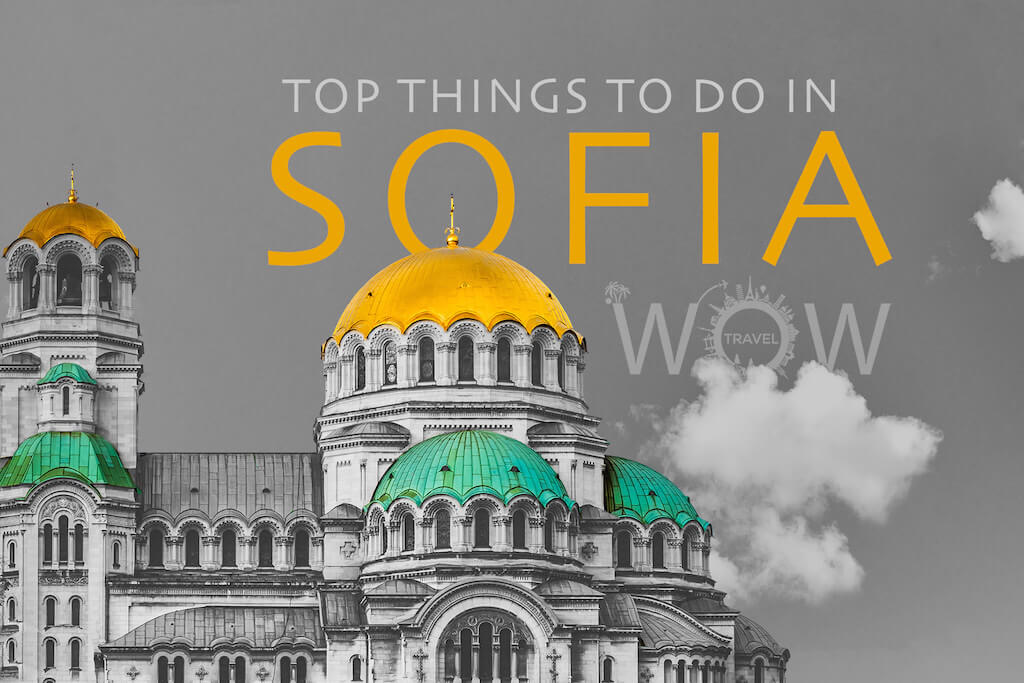 Sofia to many people is just a beautiful name for girls. To us, Sofia is one of the best kept secrets and most beautiful European jewels. During its 1300 years of history, Sofia was home to many Thracians, Macedonians, Romans, Byzantines, Ottomans, Jews, Muslims, Greeks, Slavs and more which has made of it one of the hottest spots in Eastern Europe. A true melting pot of religions, languages, traditions, architecture and culinary experiences. It has a privileged geographical position, situated in the heart of the Balkan Peninsula, on the crossroads between Europe and Asia, which is reflected in the rich culture and traditions of Bulgarian daily life. World class Hotels, gourmet restaurants, vibrant night life and affordable prices bring millions of tourists every year. Let WOW Travel’s Top 9 Things To Do In Sofia help you plan an unforgettable trip.

The Central Mineral Baths, with its colorful ceramic mosaics on the facades, is a landmark in the center of Sofia, a city known for the mineral springs in the area. The mineral bath was originally completed in 1908 in the Neo-Byzantine style, the building housed one large pool and two separate wings for men and women with smaller mineral pools. The architect was Petko Momchilov, one of Bulgaria’s most recognized architects of that era.

The Boyana Church is a medieval Bulgarian Orthodox church, one of UNESCO’s World Heritage Sites. “It consists of three buildings. The eastern church was built in the 10th century, then enlarged at the beginning of the 13th century by Sebastocrator Kaloyan, who ordered a second two-story building to be erected next to it. The frescoes in this second church, painted in 1259, make it one of the most important collections of medieval paintings. The ensemble is completed by a third church, built at the beginning of the 19th century. This site is one of the most complete and perfectly preserved monuments of east European medieval art.” Source: UNESCO

Vitosha is a the large mountain overlooking Sofia and the oldest nature park on the Balkan Peninsula. The park is home to plenty of Balkan endemics, 30 species of Tulips and various mammals, birds, insects, reptiles and amphibians. Throughout the year, this park attracts hundreds of birdwatchers due to its more than 200 bird species, 120 species of them nest within the park’s territory. It seems far from the center of the city but it is only a cab ride away to the slopes and from then it is only 10 minutes by walk until you reach the heart of Sofia’s greenery. Hikers and also families looking for a nice Sunday stroll come to Vitosha mountain to relax and get away from the city life.

The Royal Palace which initially served as the residence of the Prince and later – of the King, was among the first symbols of Sofia, following its proclamation capital city of the Third Bulgarian Kingdom. In 1816, the building was burned and abandoned for many years, but in 1873 it was built again as an administration building and during the Liberation the building even used as a hospital. After declaring Sofia as the capital of Bulgaria it became the palace for the royal family. Nowadays, it is home to the National Art Gallery and the Ethnographic Museum.

Banya Bashi Mosque was built by the architect Mimar Sinan, Its construction was completed in 1576, during the years the Ottomans had control of the city. The mosque is the only functioning mosque in Sofia and it is not officially open to tourists but modestly dressed visitors may visit outside of prayer times.

Completed in 1912, the Alexander Nevsky Cathedral is a Neo-Byzantine style Bulgarian Orthodox cathedral, it was build in honor of Alexander II The Liberator and the Russian soldiers who died during the Russo-Turkish War of 1877-1878 when Bulgaria was liberated from Ottoman rule. The temple is the biggest church in the country and one of the symbols of Sofia, it gives the spiritual and cultural outlook to the city.

“The Central Synagogue of Sofia has justly been described as the pride of all Bulgarian Jewry. It has symbolized the Jewish community of Bulgaria for almost a century. It is the second largest Sephardic (Spanish-Jewish) synagogue in Europe. The Central Synagogue is the only Jewish house of worship in Sofia.”

“Being one of the largest churches in Sofia and on prominent display from along the entire length of the pedestrian Vitosha Boulevard. The church was built in the mid-19th century in the place of a much older temple. Its function was to serve as Sofia’s major place of worship and a site for official religious ceremonies. It was during such a ceremony in 1925 that a bomb hidden in church’s dome exploded and killed close to 200 people. This act of terrorism was until recently, the bloodiest in European history. The church was quickly restored and remodeled to its former glory.” Source: flipfloppeople

The Church of St George is an Early Christian red brick rotunda that is considered the oldest building in Sofia. St. George Rotunda Church dates as far back as the Roman Empire. Its construction coincides with a moment of the remarkable flourishing of Serdika as one of the largest and most considerable Roman towns on the Balkan Peninsula.