Top 10 Things To Do In Kiev 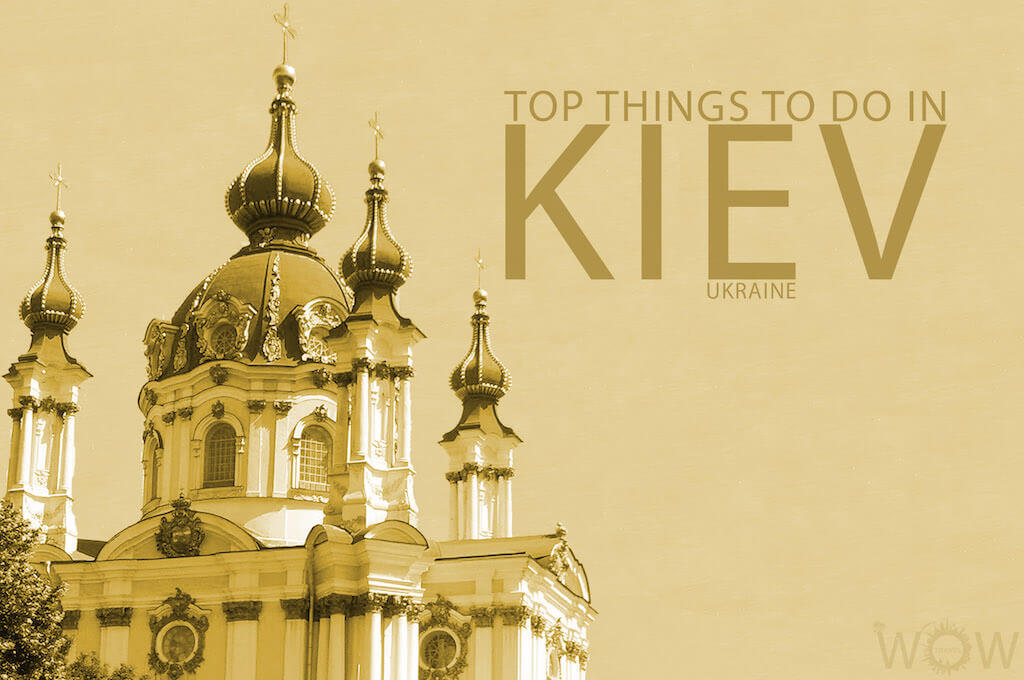 Kiev is one of the oldest cities in Eastern Europe, dating back to the 5th century and the capital and largest city of Ukraine. Located in the north central part of the country on the Dnieper River, Kiev is a city rich in history and beautiful architecture, with countless cathedrals and monasteries, and with a thriving contemporary art scene. Check out our Top 10 Things To Do In Kiev.

Andriyivski Uzviz, also known as Kiev’s Montmartre, is one of the oldest and most picturesque places in the city. This serpentine, cobbled slope marks the heart of arty Kiev, the place to come for art, crafts and fun as its steep descent is lined with numerous art galleries, museums, unique souvenirs shops with traditional Ukrainian goods, as well as cafes, bars and restaurants. Climb to the top of the hill and you can feast your eyes on St Andrew’s. This church is the last work of Rastrelli, the Italian architect who built the Winter Palace in Petersburg. Completed in 1762, the building is a lovely piece of Baroque fantasy.

Mother of the Fatherland

One of the biggest monuments in Kiev (62 meter / 203 ft). It is part of the Museum of the Great Patriotic War, built to commemorate the German-Soviet War.

Also known as ‘Maidan Nezalezhnosti’ is the central square of Kiev and the place for the Orange Revolution (2004). It is located on Khreshchatyk Street in the Shevchenko Raion. It’s a huge open space with fountains, the Independence Column, the famous Hotel Ukraina and across the Khreshchatyk street, benches and some stalls together with Lyadski Gate.

Built in Russian-Byzantine style with a yellow exterior and a colorful fresco-filled interior, this seven-domed church is a good place to experience a Ukrainian Orthodox service. St Volodymyr’s Cathedral is one of the city’s major landmarks and the mother cathedral of the Ukrainian Orthodox Church – Kiev Patriarchy. It was constructed in the late 19th century to mark 900 years of Christianity in the country.

Founded in 1936, this graceful garden features over 14,000 different types of flowers, trees, shrubs and plants. Famous for its arboretum and spring display of Lilacs, magnolias, roses, and peonies. It is located near the bank of the Dnieper River.

Dating back to the glorious times of Kievan Rus, St. Sophia’s Cathedra, with its well-preserved Byzantine-style mosaics of Saints and Kings, remains an outstanding architectural landmark and tops the most-visited list of sights in Kiev. It is one of the oldest and most majestic Churches in Eastern Europe. The cathedral was originally a close copy of Hagia Sophia in Constantinople, but centuries of rebuilding have left it much altered. When you visit the cathedral, be sure to see the Bell Tower, ornamented in white stucco molding and a brilliant turquoise background.

St. Michael’s Monastery was built in the early 12th century dedicated to the patron saint of Kiev, Archangel Michael. It is one of the oldest monasteries in Kiev, which includes the church of Archangel Michael destroyed in 30’s of the last century and rebuilt in the middle 90’s, and the refectory church of St. Ioan Bogoslov. The temple was built in the Ukrainian Baroque style, and it was the first temple with gilded dome in Rus, whereof this unusual tradition originated. In the courtyard of St. Michael’s Monastery you will find the famous Wish Fountain.

Kiev Monastery of the Caves

Kiev Monastery of the Caves, also known as Kiev-Pechersk Lavra, was founded almost 1000 years ago and it acts as a tomb for over 100 revered monks. It comprises an entire complex of churches and other religious buildings, this UNESCO World Heritage Site is perhaps most famous for its cavernous interior, where you’ll need a candle to find your way around. Even if you’re not overly religious it is worth the experience.

One of the main streets of Kiev, Khreshchatyk extends from the European Square to the Bessarabska Square, which is home to the Besarabsky Market. There are many places on this street to shop as well as cafes, and restaurants. In 2010, Khreshchatyk Street was including in the top 20 most expensive streets in Europe. During the weekend they close the street for traffic and it fills with performers, artists, markets and events of all sorts.

Established in 1867, the National Opera House of Ukraine is an ornate, romantic theatre with a 200 year history, this opera house is currently home to the Kiev Opera Company. Aficionados of classical music, this is your destination. Known for drawing world class talent, this facility is one of the most prestigious in the country.