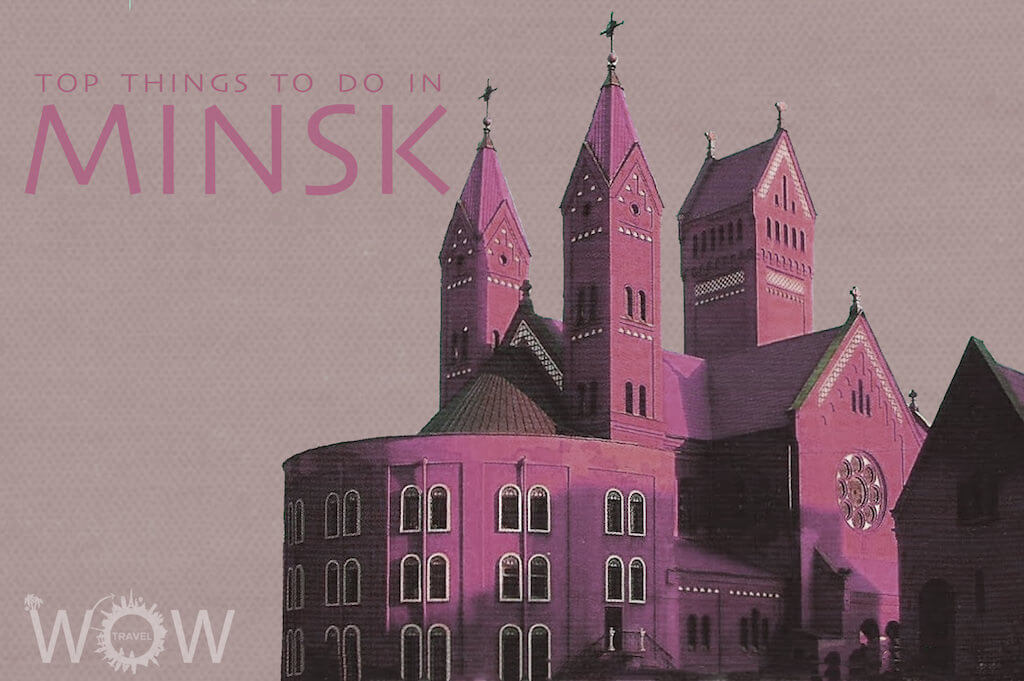 Minsk, the beautiful capital of Belarus, is an ancient city with a rich history, traditions, culture, and arts. It is situated in Eastern Europe, 340 km (213 miles) northeast of Warsaw and 120 km (75 miles) southeast of Vilnius. Minsk was almost completely destroyed in the second world war and was rebuilt during the Soviet time. Till 1991 it was the capital of the former Byelorussian Soviet Socialist Republic, so Minsk has lots of nice Soviet-block style buildings. While Minsk is one of the least visited capitals of Europe, it has a lot to offer and it is incredibly inexpensive. From a thriving cultural scene with opera, ballet, theater and a circus to its charming old town, old churches, many museums and leafy parks. Check out our Top 9 Things To Do In Minsk.

Church of Saints Simon and Helena

This Catholic church (better known as «Red Church») was built in 1908-1910 by a noble Belarusian family upon the premature death of their two young children. The church with red-brick towers, spires, and pitched roofs became a symbol of inconsolable grief for those who died untimely. When the Bolsheviks came to power, the church became a cinema then a film studio. Only not long ago, in 1990, the church was given back its original status. Services here start at 7 p.m. Source: hotels-minsk

National Library of Belarus is an architectural symbol, features a stunning form and an eye-catching led display that shines at night. It stands 74 meters (242 ft) tall with 23 floors and a capacity to store over 14 million books. On the top floor of the building, there is an open-air observation where you can get a great view of the city.

Victory Square is located in the center of Minsk at the intersection of Independence Avenue and the streets Zakharova. In the area of an installed granite obelisk 38 meters high, topped with a three-meter image of the Order of Victory. The monument has an eternal flame at its feet, which has been burning since 1954. Victory Square was originally a round shape. In 1984, in connection with the commissioning of the Minsk subway, it was redesigned and became oval.

The National Academic Bolshoi Opera and Ballet Theatre of the Republic of Belarus is located in a park in the Trinity Banlieu and began performances in 1933. The theater building is an example of the pre-war Soviet constructivism and has the status of an architectural monument of national importance. Nowadays there are more than 240 performances a year.

The area of Independence Square (before 1991, Lenin Square) is in the center of Minsk. The only building survived from the beginning is the Church of Saints Simon and Helena. Nowadays the square includes the House of Government, the Minsk Executive Committee, University and Belarusian State University, Belarusian State Pedagogical and huge central post office. There is a huge shopping center underground.

At the behest of Vladamir Lenin, Russia provided the means necessary to elevate the circus to a national art form, comparable to the opera and ballet. During the Soviet era, this playful performance art leaked into all the block countries, yet it flourished most in Belarus, where the Belarus State Circus building was opened in 1959, the first permanent circus facility in the USSR. Today, the Belarus State Circus is an award-winning, internationally recognized group which performs all over the world. It is also a place where international circus groups make guest appearances so that in Minsk, there is always something new to witness. Source: trekity

The Ferris Wheel in Gorky Park

Gorky Park is a beautiful public park, located near the Victory Square and the Yanka Kupala Park.  Take onThe perfect place to experience great views of the city is on the ferris wheel.

Located on the banks of the Svislach River, the Trinity Hill is the oldest surviving district of Minsk with beautiful 19th-century houses and charming views of the city. It is a calm place to watch the sunset or take a pleasant stroll.